Campeche: The Monastery of San Francisquito 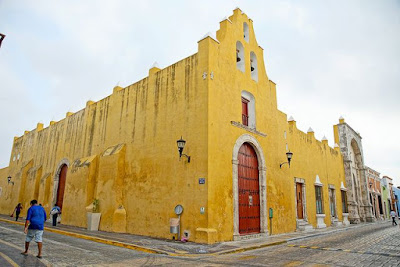 Nestled at the intersection of Calles 12 and 59, a few blocks from Campeche cathedral in the fortified city of Campeche, is the diminutive monastery of San Francisquito. It was built as a refuge for the friars within the city walls when pirates or other hazards threatened the mission of San Francisco up the coast.

The narrow little 18th century church is the setting for an exuberant set of late baroque altarpieces: a main altarpiece and four side retablos, rich in Franciscan iconography, recently restored by INAH. 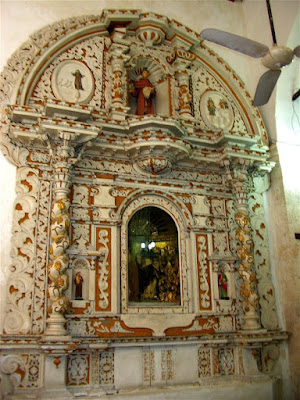 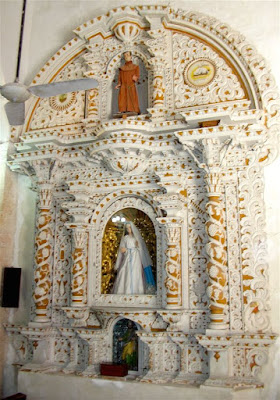 the side retablos
Restored in dazzling white and ochre, they feature elaborately carved spiral and estípite columns and are intricately ornamented with a filigree of open scroll work. Wooden statues of the best loved saints of the Franciscan order are accompanied by scenes from their lives carved in colorful relief. 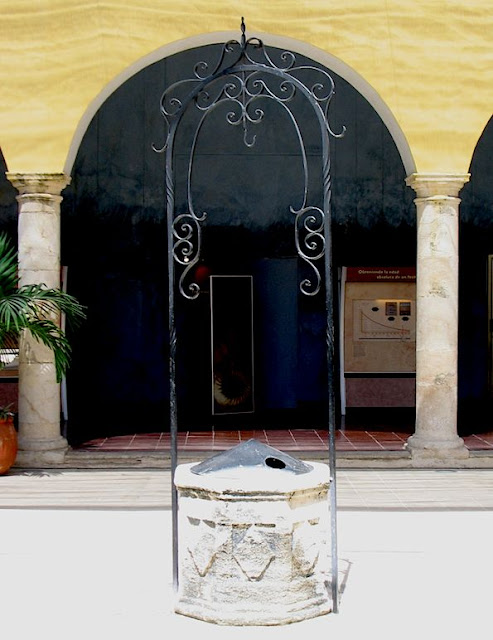 The arcaded former hospice next door on Calle 12 has been tastefully restored as a municipal cultural center, keeping the original columns and the carved stone well in the center of the patio.
Its recessed entry is emblazoned with the Crossed Arms of the Franciscan Order amid pierced medallions of the sun, moon, and star of Bethlehem—a reference to Our Lady of Bethlehem, a frequent patron of hospices in Mexico and elsewhere.
text © 1998 & 2018 Richard D. Perry
images by the author except where noted