Yucatán is rich in haciendas, many of them built or expanded during the henequen boom of the early 20th century. In almost every instance a small family chapel was included in the hacienda precincts, either as a dedicated area within the central casa grande or more commonly,as a separate structure.
We return to Yucatán to visit some of the more interesting examples in the region: 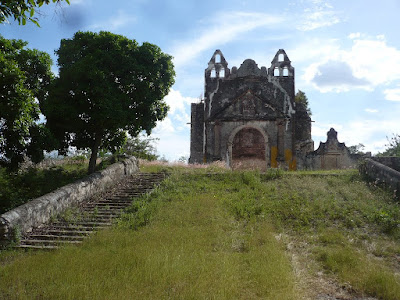 One of the most distinctive chapels, whose long and eventful history dates back to colonial times, with links to the Caste War and the Revolution, is at Hacienda Blanca Flor, now in the state of Campeche. 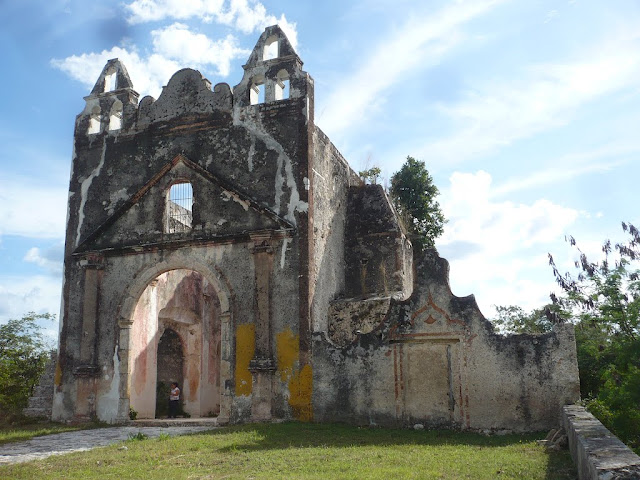 Blanca Flor boasts an elegant but evocative 18th century ruined chapel (above), set dramatically on a hillside beside the old Mérida-Campeche highway, across from the hacienda itself. Through its gaping pedimented doorway, the visitor can glimpse the peeling painted walls of the sanctuary, abandoned and untouched for over 100 years. 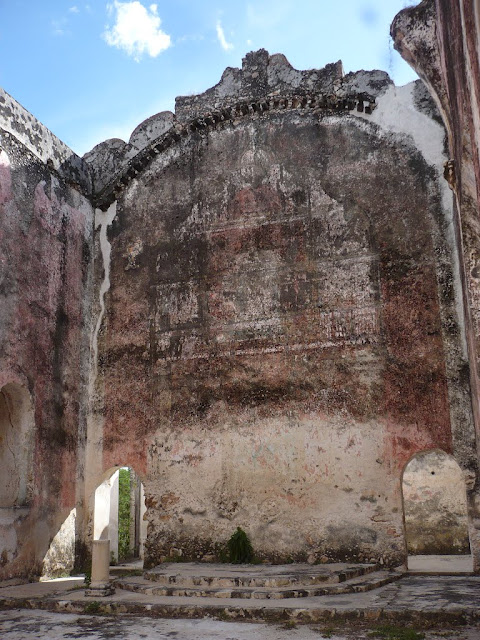 The hacienda was founded in colonial times as a Franciscan estate and monastic retreat. Most of the older buildings, including the high ceilinged sala and graceful moorish gateways (below) are still intact. The Empress Carlota stayed here on a state visit to Campeche in December 1865, but the old rooms around the inner patio were modernized in the 1900s to accommodate visiting friars. Today the hacienda is open to the public as a wayside inn.

Blanca Flor occupies a special place in Yucatecan lore. During the Caste War, in May 1848, defenders of the hacienda successfully fought off Maya rebels, stemming their advance towards Mérida and possibly saving the capital from being overrun.
In 1915, in defiance of federal authority, hastily assembled militias drawn from Mérida's middle class made a heroic stand at Blanca Flor. Surprising the advancing Revolutionary Army of General Alvarado, the ill-trained recruits held off the hardened Mexican troops for twelve hours, firing volleys from machine guns mounted on the chapel roof. At the cost of considerable casualties, the Yucatecans were eventually dislodged from the battered chapel and they retreated north towards Mérida, only to be overtaken and captured at Pocboc and Halachó.
Eventually, the Revolutionary government prevailed in Yucatán, although here, as elsewhere in Mexico, many promises of the Revolution remain to be fulfilled.
text © 1988 & 2018 Richard D. Perry
images by the author and Miguel S. Espinosa Villatoro
please visit our other Yucatán hacienda posts: Tabi; Xocnaceh
Posted by Richard Perry at 10:23 PM