Continuing our posts on the rural churches of Yucatán, we visit the pilgrimage church of Halachó located on the old camino real between Mérida and the city of Campeche. 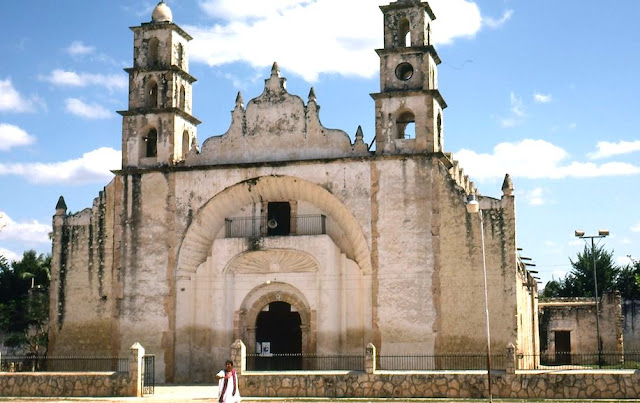 The white, scalloped facade of Santiago Halachó is one of the sights of the old Camino Real between Campeche and Mérida in western Yucatán.
Santiago Matamoros (St. James the Moorslayer) was the militant patron saint of Reconquest Spain. Pilgrims journeying to Santiago de Compostela, his shrine in northern Spain, wore the scallop shell on their tunics and broad-brimmed hats as a token of their devotion, and the emblem became universally associated with the
saint.  Symbolizing victory over the infidel, he was also a favorite of the conquistadors in Mexico.
The mission at Halachó became a popular shrine to Santiago in whose honor the town still holds a large fair in mid-November.  Halachó was famous for its colonial statue of the saint; John Lloyd Stephens, the noted American explorer, witnessed the festival on his 1842 journey, and vividly described the image:

High above the heads of the crowd, catching the eye on first entering the church, was the figure of Santiago, or Saint James, on horseback, holy in the eyes of all who saw it, and famed for its powers of working miracles... The forefeet of the horse were raised in the air, and the saint wore a black cocked hat with a broad gold band, a short mantle of scarlet velvet, green velvet trousers, with a wide gold stripe down the sides, and boots and spurs... Men, women and children were pressing forward, struggling with each other to kiss the foot of the saint. 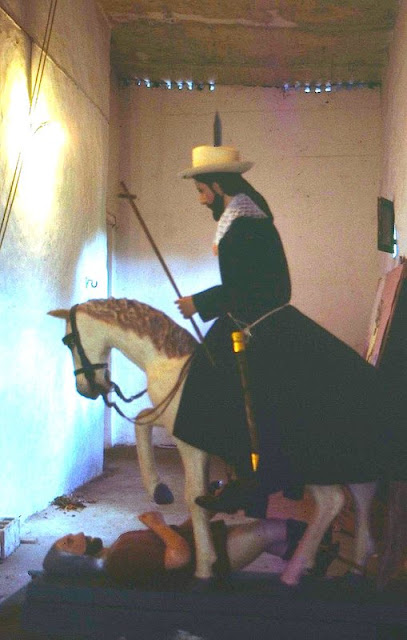 Sadly, this heroic image was destroyed during the Revolution. A lifesize modern replacement is now housed in the camarín behind the altar. Santiago has traded his cocked hat, boots and spurs for a Panama hat and stylish contemporary shoes; he rides upon a diminutive white horse which tramples underfoot the traditional figure of a vanquished Moor. 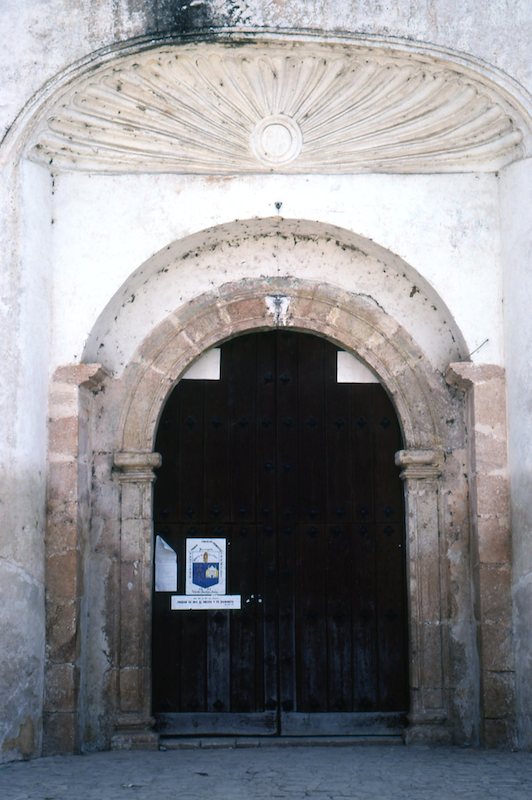 The scallop motif pervades the 18th-century basilican church, most conspicuously on the facade. An undulating porch framed by stylized shell arches appears to have been superimposed on an earlier doorway—perhaps judged too plain for an important pilgrimage church.
The delicate curving outline and cone-shaped merlons of the central pediment are echoed in the decorative buttresses, which extend beyond the broad aisles of the church to create an exceptionally wide facade. At one time the aisles may have been open and windowless, serving as secondary entrances to the church to accommodate the numerous pilgrims. 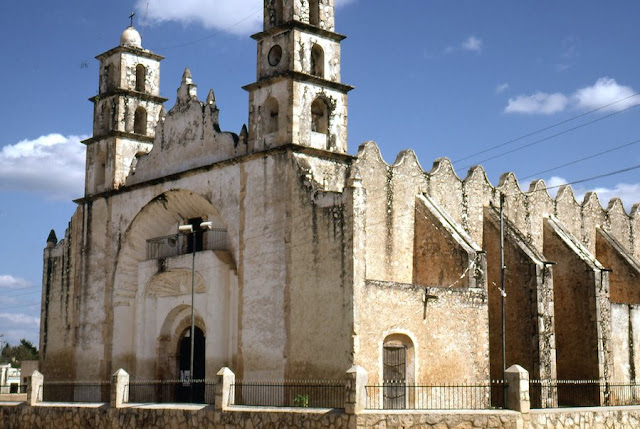 Diminutive bell towers like those at nearby Becal seem almost an afterthought. Inside the church, Doric colonnades separate the nave from the side aisles. 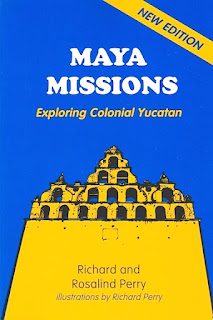 Posted by Richard Perry at 9:39 AM