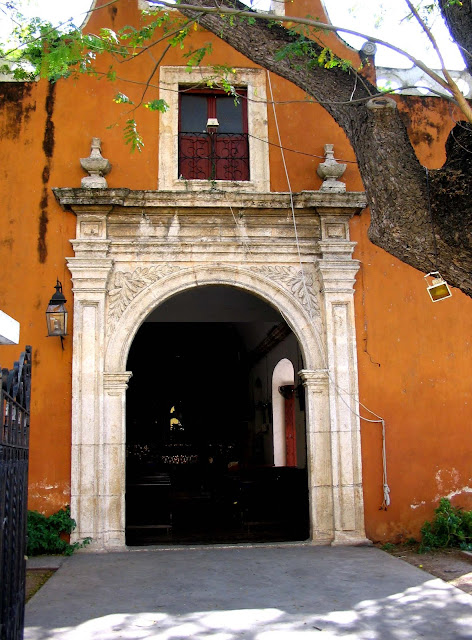 Founded as an ermita or barrio chapel of Mérida in the late 1600s, the sturdy little church of La Candelaria was built early in the next century (dated 1706 by an inscription on the sanctuary arch) looking much as it appears today following recent restoration.
A modest espadaña, trimmed with tiny decorative scrolls and flanked by pierced parapets, stands above the classically framed doorway carved with discreet sprays of acanthus leaves above the archway. 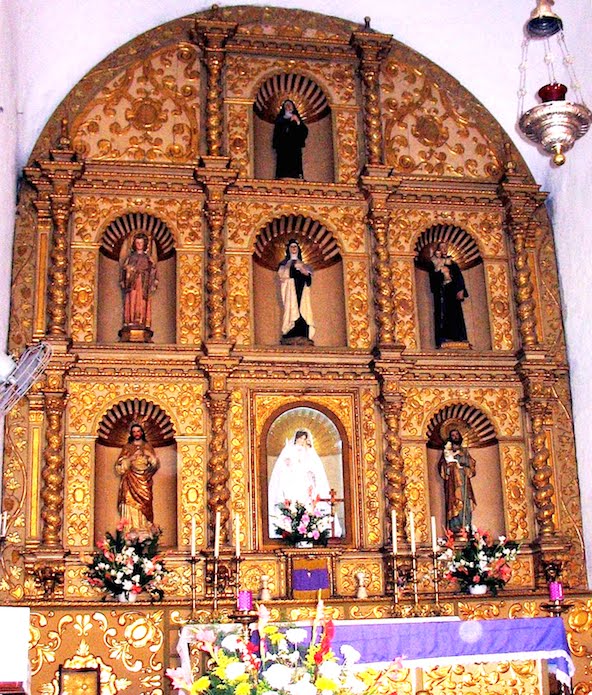 As you peer through the doorway to penetrate the dim chapel interior, the unique treasure of La Candelaria comes slowly into view at the far end. There, in the domed sanctuary, rests a magnificent gilded altarpiece.
Framed with spiraling Solomonic columns and richly embossed with red, white and gold foliage, this gleaming baroque retablo is the only altarpiece of this style in the city of Mérida to have survived the widespread despoliation of area churches during the Mexican Revolution. 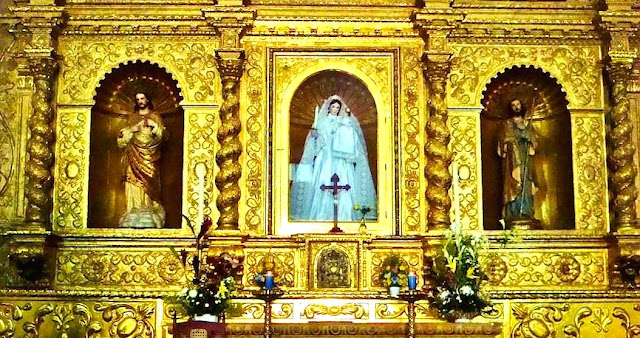 As might be expected, the image of the Virgin Mary holding her candle occupies the center niche, flanked by handsome statues of St. Joseph and the Sacred Heart of Jesus.

However, in the niche above, flanked by the figures of the Archangel Raphael and St. Anthony of Padua, rests a full length statue of St. Teresa, the founder of the Discalced Carmelites. This image is clearly colonial in origin, carved from wood and finished in the estofado manner.
The presence of St. Teresa here is mysterious; although there is a well known santuario of the Virgin of Carmen in Campeche, there were no Carmelite churches in colonial Mérida. It may be that it was hidden for safe keeping during the ravages of the Revolution and placed here subsequently.
Recently restored by the energetic local branch of Adopte Una Obra de Arte, the re-installed retablo, together with its elegant statuary, takes its place among Mérida's finest and rarest works of colonial religious art.
* For Mexicans, the festival of La Candelaria, or Candlemas, is celebrated on February 2. In ancient days, according to Mosaic law, this time marked the ceremony of Purification, a Jewish tradition which required Mary and Joseph to present the infant Jesus in the temple 40 days after his birth.

Yucatan altarpieces MAP
Posted by Richard Perry at 10:14 AM