Followers of our blog will know of our interest in the Ureña family of 18th century Mexican architects and retablo designers and their various works across the country.
In previous posts we have described the spectacular Ureña altarpieces in the Zacatecas church of San Agustín. In this and our previous post we consider two superb altarpieces in the old mining town of Pinos, Zacatecas, attributable to Juan Garcia Castañeda, the retablista and son in law of Felipe de Ureña, the family patriarch and principal designer.

In our first post we looked at the retablo in the church of San Francisco de Pinos. The second Castañeda altarpiece is that found in the chapel of La Purísima in the barrio of Tlaxcalilla, founded in the late 1500s to accommodate natives from Tlaxcala imported to work the area mines. 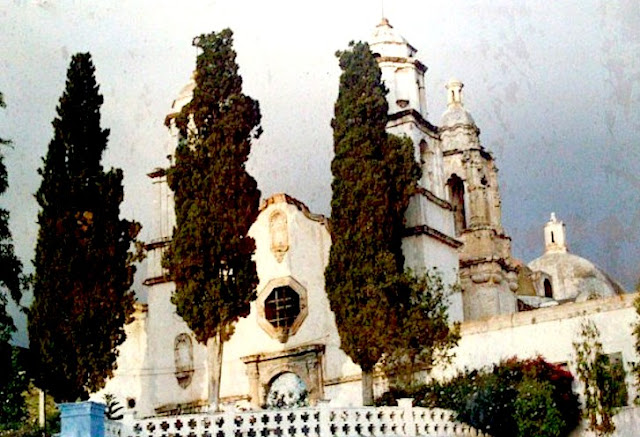 La Purísima Tlaxcalilla
This once modest barrio chapel was lavishly rebuilt in the later 1750s, at which time the present main retablo was commissioned and built. 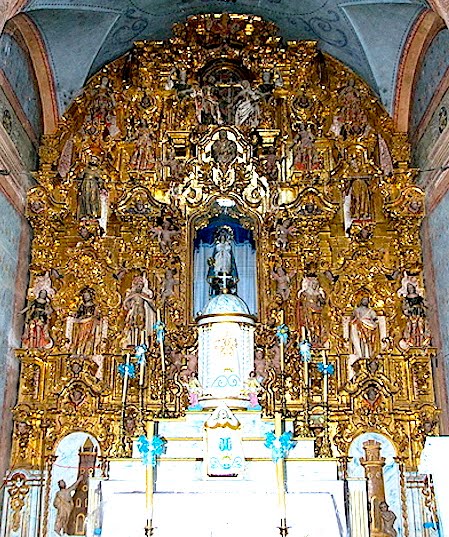 Although clearly related stylistically to the San Francisco retablo, in the Tlaxcalilla altarpiece the interestipites (niche pilasters) are given even greater prominence, set against a more even tapestry of exuberant curves and intense relief ornament that tends to subvert the underlying structure and even threatens to eclipse the statuary which they were designed to showcase.
The retablo is also dedicated to the Virgin of the Immaculate Conception, whose modern figure occupies the principal niche. The other statuary is original if now in often poor condition. These include Saints Joachim and Anne, the parents of Mary, together with Franciscan saints and some archangels. 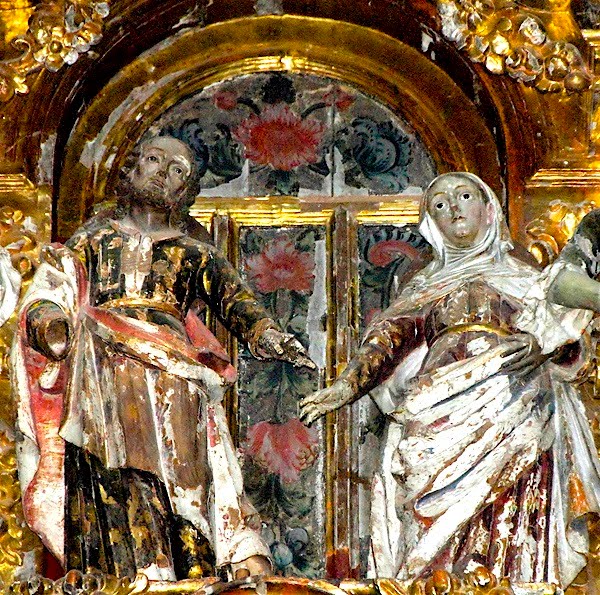 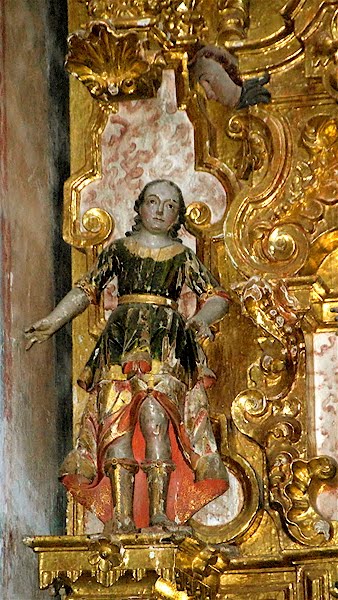 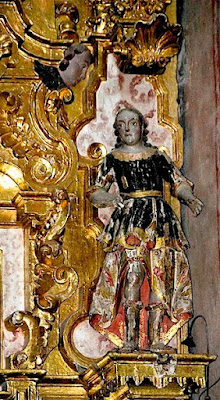 Archangels
San Matías
A third Castañeda retablo, now gone, was commissioned and assembled for the parish church of San Matías. However, fragments may be preserved in the Museo de Arte Sacro, on a lower level of the church, including some colonial paintings.

* Known as El maestro transhumante, the "peripatetic master", Felipe de Ureña was the most influential of the Mexican born architect /designers to introduce and expand the Churrigueresque or barroco estípite style into New Spain. During the second half of the 18th century, together with family members, he was primarily responsible for the spread and subsequent evolution of this ornate late baroque style into cities across Mexico, especially along the silver routes north of Mexico City. Primarily an innovative designer and fabricator of altarpieces, he later adapted the barroco estípite style as it was called, for church facades. His elegant and distinctive designs are recognized as the "felipense" style.
text © 2020 Richard D. Perry
color photography courtesy of Niccolo Brooker
Posted by Richard Perry at 11:35 AM