In an earlier post we described the parish church of Dolores, whose designer has also been associated with the ornate Churrigueresque façade of the city church of San Francisco in San Miguel de Allende.

San Miguel de Allende
In 1542, Fray Juan de San Miguel, the "Apostle of Michoacan," arrived to evangelize this former outpost of the Tarascan empire. Fray Juan gathered Tarascan and Otomi Indians into a settlement here, which he named San Miguel de Los Chichimecas, and erected a primitive mission.
Although this first tiny mission was abandoned because of Chichimec raids, Spanish colonists and native settlers from Tlaxcala arrived soon after, swelling the size of the fledgling community. In 1555 the town was relocated and renamed San Miguel el Grande. By the close of the 16th century, San Miguel was securely established as a center for the growing woollen industry, as well as an important way station on the silver route to Zacatecas in the north.
In the mid-1600s the rude, pole-and-thatch chapel had been replaced by a sturdy stone church and the friars took up residence in their newly completed convento. This simple mission, formerly known as San Antonio and now associated with the lay Franciscan Third Order, still stands beside the later, even grander church of San Francisco. A timeworn relief of St. Joseph is mounted below the picturesque espadaña or wall belfry. 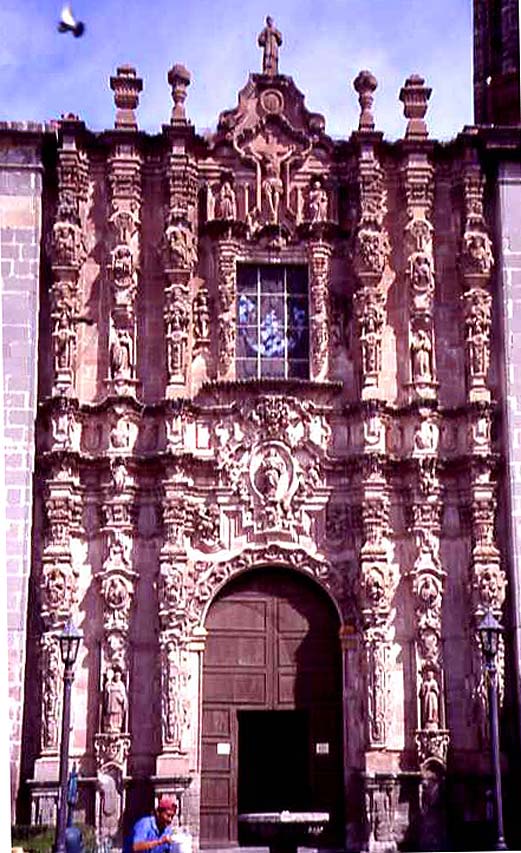 The Church
In 1779, work began on the monumental church of San Francisco—the last major colonial building to be erected in San Miguel. Neatly framed by a well-maintained alameda with a stone fountain, the dazzling Churrigueresque facade is far and away the most accomplished example of 18th century architecture in San Miguel, and is associated with Francisco Bruno de Ureña, son of the eminent designer/architect Felipe de Ureña.
The facade bears a strong family resemblance to the parish church at Dolores Hidalgo, also attributed to Francisco Bruno de Ureña, as well as to Felipe de Ureña's basilica of La Compañia in Guanajuato. Beautifully carved from fine-grained roseate stone, the facade shows great clarity and harmony of design. 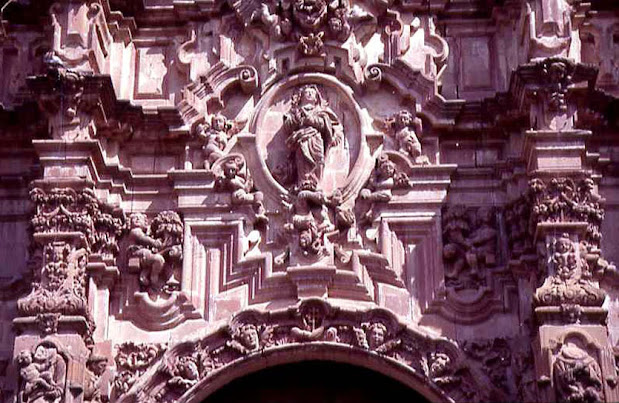 The main focus is on pairs of giant estipites, which enclose ornamental niche-pilasters of similar weight and emphasis. In keeping with the Guanajuatan Churrigueresque style, special attention was devoted to architectural and decorative reliefs, especially the finely detailed figure sculptures.

Atop the estipites, for example, expressive busts of kings, saints and prelates emerge on each side of bulging cartouches, while simple, elegantly posed statues of Franciscan saints fill the niches. The elongated figure of St. Francis of Assisi, in particular, seems to radiate a sorrowful spirituality.
A sculpted crucifix much like that at Dolores Hidalgo, encased in a cruciform frame at the apex, is flanked by the mourning figures of the Virgin Mary and St. John the Evangelist. A large oval relief of La Inmaculada, enmeshed in a welter of mixtilinear and bescrolled ornament above the lobed doorway, reminiscent of Francisco Bruno’s center façade of San Diego de Alcalá, in Guanajuato, lifts the eye to the upper level.
A second statue of St. Francis surmounts the facade.

The soaring tower—a project funded, according to local lore, by receipts from bullfights—was the final addition to the church. This is another work by Eduardo Tresguerras, whose work we saw in Celaya and is considered one of his noblest designs. Boldly projecting double columns at the corners of each tier compel the eye skywards to the crowning, octagonal cupola.
The bright interior was also remodeled by Tresguerras, and is an agreeable, if rather cool, exercise in neoclassical taste. It is dominated by a huge colonnaded tabernacle, complemented by nine stone altars around the nave—each fashioned from rose-colored limestone.

text © 1997 & 2020 Richard D. Perry
color images and graphic by the author except where noted. all rights reserved
Posted by Richard Perry at 12:15 PM