This is the second in two posts on altarpieces attributed to Pedro de Rojas in the church of Santa Rosa de Viterbo in the city of Querétaro.
Previously we looked at the altarpiece of Guadalupe. Here we describe its sister retablo of San José, more correctly called the Death of St Joseph. 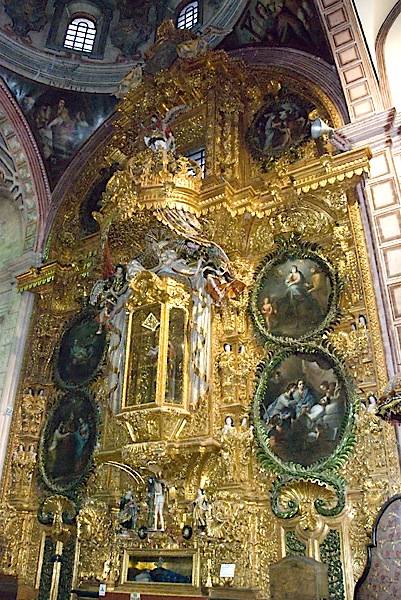 Almost identical in its structure, framing and luxuriant detail to the Guadalupe altarpiece opposite, this retablo is also considered to be another masterwork by Pedro de Rojas, possibly in collaboration with Gudiño. 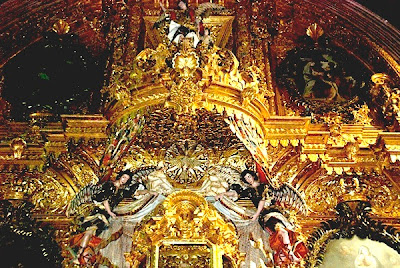 The center pavilion is capped, like the Guadalupe retablo by a vast projecting crown, atop which stands a dynamic statue of the Archangel Michael. 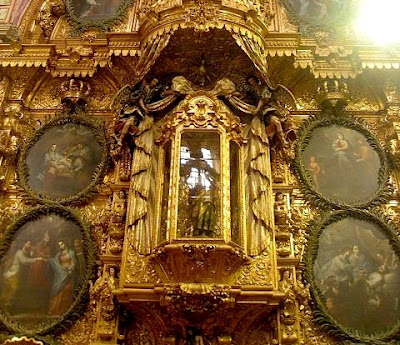 Below, angels draw aside drapes and look down fondly at the statue of a youthful St. Joseph in the center vitrine, a saint venerated in the Americas from early colonial times, who holds the naked infant Christ . 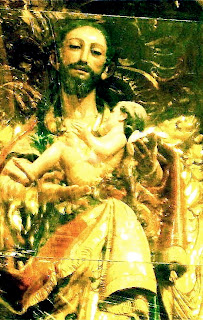 Below the vitrine, statues of St Joachim, holding the infant Virgin Mary, and St Anne flank the figure of Christ at the Column. 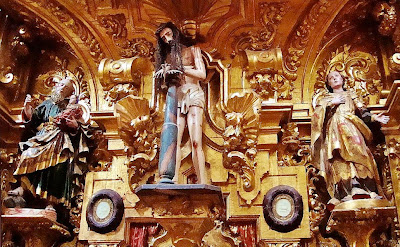 As with the Guadalupe retablo, garlanded ovals frame four paintings that relate key episodes from the life of the saint—again reputedly the work of Miguel Cabrera.
The scene at lower right depicting Christ at the deathbed of St. Joseph, which gives its name to the official title of the altarpiece, recalls the similar tableau in the Salamanca retablo, also by Rojas —among the surprisingly few portrayals of this event in Mexican religious art. 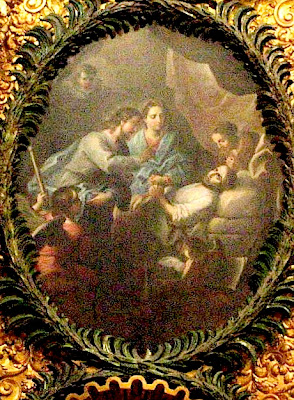 Posted by Richard Perry at 1:46 PM