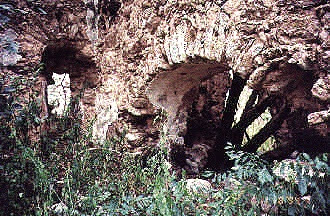 Chalanté
Southeast of Xcambó, close to the ancient and colonial city of Izamal lies the lost mission town of Chalanté.  Hidden in overgrown woodlands attached to the Hacienda de Chalanté, once the location of an extensive Maya site, this rural settlement was chosen by Franciscans from Izamal as the site for a satellite visita mission.
The church was set on the platform of a former temple. Cut masonry from the demolished  temple was recycled to build an open air  chapel framed by an grand stone archway and flanked by a log-beamed sacristy and choir/baptistry.
In the 16th century, an oval pole-and-thatch ramada would have extended out from the chapel front across the old temple precinct to shade the Indian congregation from the fierce tropical sun. The ramada nave was raised atop at least partial masonry walls whose limestone foundations can still be traced. 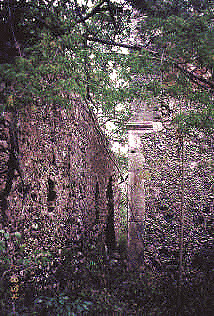 In later colonial times, work began on a second mission church behind the original building, again using stone from the Maya ruins as well as probably cannibalizing the older chapel.
However, because of depopulation and quite likely the expansion of the hacienda onto village lands, both the settlement and its roofless churches were abandoned.

In editing this series, we should like to acknowledge our debt to the pioneering work of the eminent
Yucatan archeologist and historian Anthony P. Andrews

For more on the history and art of the Yucatan missions, consult our published guides.
Posted by Richard Perry at 5:00 PM