Well, today is the day!  Perhaps, given the present world situation, it was the end of rationality that the Maya had in mind. Whether or not the world as we know it ends on December 21st, 2012, we hope that you have enjoyed our blog this past few months.

In any event, we now press on with the Lost Missions of Yucatan, continuing down the east coast of the peninsula, now part of the state of Quintana Roo.

On the 1st of March 1517, the first Spaniards set foot on the mainland of what is now Mexico. This epochal event, as related by the chronicler Bernal Díaz del Castillo, took place at Ecab, situated on the northeastern corner of the Yucatan peninsula, a town that he dubbed “El Gran Cairo” because of its impressive size.
At the time, Ecab was a large and populous Maya settlement that played an important role in the flourishing coastal trade route. Following the Spanish conquest, Ecab, as the dominant town in the region, was the natural site for a Franciscan residential mission, which was duly established by the mid 1500s.
This mission became the hub for several other visita missions along the coast of eastern Yucatan, including those at Xcaret (Polé) and Cozumel (the mission of San Miguel Cozumel was sadly destroyed during development on the island in the 1950s).
The network stretched southwards to Tancah, Tulum, Oxtankah and Xocá, extending as far as Lamanai and Tipú in present day Belize, several of which retain vestiges of early mission structures.
However, with the post Conquest decline of ancient coastal trade, together with devastating epidemics, the growing menace of piracy, and its remoteness from the colonial capital at Mérida, the town, the mission at Ecab along with the network of east coast visitas were all abandoned by the mid-1600s.
The remains of numerous Maya structures and causeways dot this still inaccessible * settlement, visible from the coastal lagoon known as Boca Iglesia. The surviving mission complex is a relatively pristine example of a substantial 16th century mission—the largest and most ambitious of the abandoned eastern missions.
Raised on a platform, the foundation of a former Maya temple, it retains its original arched open chapel with flanking side rooms, capped with a two tier belfry or espadaña—all sturdily built from some recycled Maya stonework and the abundant limestone rubble. 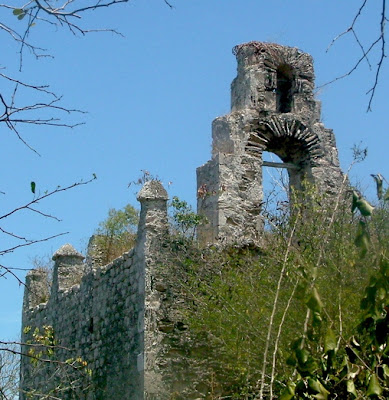 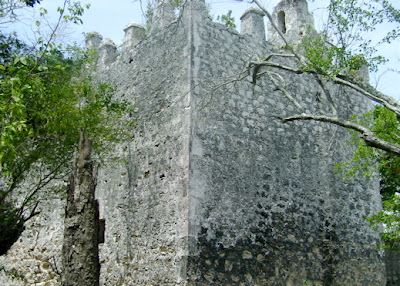 In addition, parts of the low masonry walls of the church remain in place, which was originally covered by a traditional, palm thatched roof, as the reconstruction diagrams show: 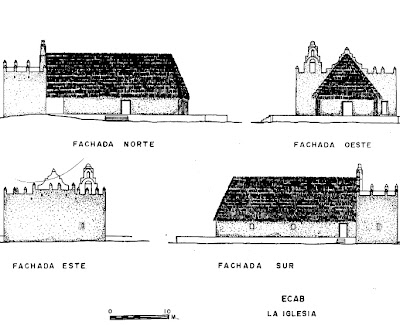 The relative importance and longevity of the Ecab mission allowed for  the construction of a separate, and substantial, casa cural for the resident friar(s), now in ruins.
This also was later abandoned when the mission was downgraded to a visita, served from the mission at Chancenote.
*Although still remote at this writing, ambitious plans are afoot for the construction of a resort at Ecab, to be called Boca Iglesias!
text © 2012 Richard D. Perry.  drawings by Richard Perry & Gordon & Ann Ketterer
photography by Jorge Martin Castillo et al

In editing this series, we should like to acknowledge our debt to the pioneering work of the eminent
Yucatán archeologist and historian Anthony P. Andrews

For more on the history and art of the Yucatán missions, consult our published guides.
Posted by Richard Perry at 8:37 AM