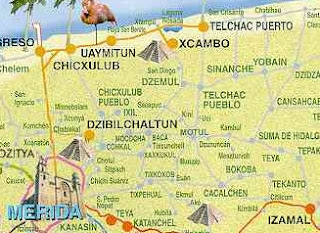 Thirty kilometers northeast of Dzibilchaltún, close to the north coast of Yucatan, lie the ruins of the ancient Maya site of Xcambó. The site has been partially cleared and excavated in recent years, and several of the pyramids have been restored.
Due to its strategic position on the rich coastal salt flats, in early Classic times (AD 250-550,)  Xcambó had become an important salt producing and distribution center for Yucatan and beyond. (The region is still an important salt production area.)
Xcambó's small ceremonial center is organized around a main plaza and includes pyramids and platforms, known as the Temple of the Cross, the Temple of Sacrifices and the Pyramid of the Masks, so called from the stucco and painted masks on its façade.
However Xcambó was abandoned after 750 AD, possibly as a result of changes in Maya trade routes.

After the Spanish conquest, Xcambó was chosen as the site of a Catholic sanctuary, and a chapel dedicated to the cult of the Virgin was erected in the mid-1500s.

Set in the center of the site amid the ruins, and built of recycled stonework, the little thatched chapel of Santa Maria de Guadalupe, stands atop the base of a former Maya temple or residence, one of whose corbeled Mayan arches still remains.
Now restored and in use, the chapel takes the traditional form of an early mission with open sides and a thatched roof, with the addition of diminutive Yucatan style tower belfries on the front—a charming mix. 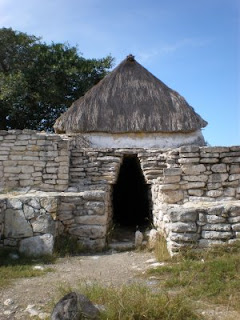 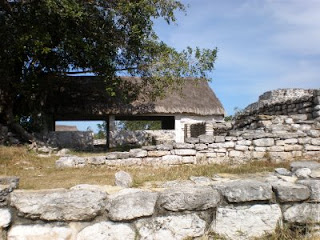 In editing this series, we should like to acknowledge our debt to the pioneering work of the eminent Yucatan archeologist and historian Anthony P. Andrews

For more on the history and art of the Yucatan missions, consult our published guides.
Posted by Richard Perry at 4:07 PM