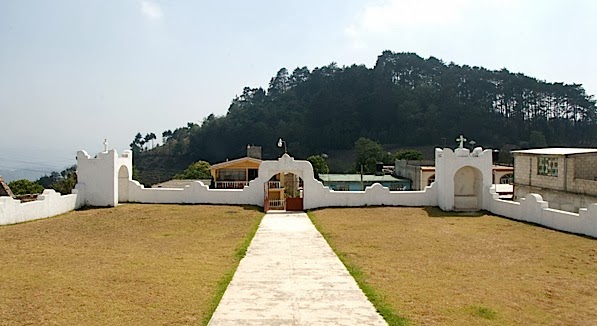 The raised atrium with its centrally placed cross and corner posas of uncertain date, is accessed by a broad flight of stone steps.
The imposing square front is very much in the regional style, now surmounted by a triple belfry flanked by towers of varying sizes—later additions. Recently cleaned and restored, it creates a distinctive outline that recalls its similarly sized neighbors at Zacualtipan and Zoquizoquipan. 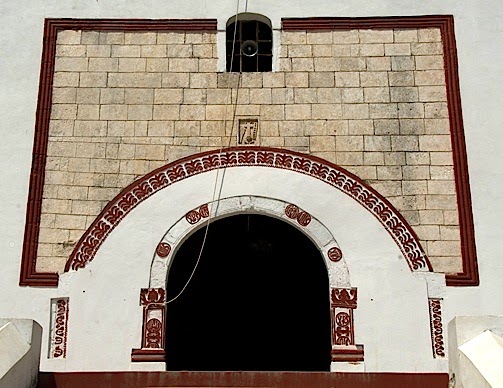 As with other area chapels, the grand original archway of the facade is framed by a large, rectangular alfiz with plain, fluted moldings. The arch encloses a smaller doorway—another later addition.
Like other regional churches too, these framing devices are carved with a variety of motifs. The reliefs on the older arch are thought to represent corn or possibly a native reed (Acatl = Aztec day sign) while roundels with religious monograms alternate with fleurs-de-lis around the archway. 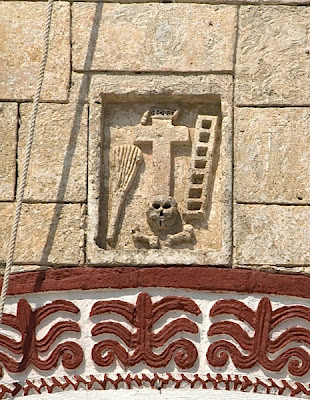 A calvary cross relief with skull, scourge and ladder surmounts the archway


We accept no ads. If you enjoy our posts you may support our efforts
by acquiring our guidebooks on colonial Mexico
Posted by Richard Perry at 10:32 AM