The Buried Church of Tlatemalco

Just below the twisting road that winds through the scenic Barranca de Metztitlan, stands the squat 16th century church of San Pedro Tlatemalco, an early visita of Santos Reyes Metztitlan.

The church was originally much taller and more imposing, as the facade diagram below reveals and its broad, out of scale belfry indicates. In fact, now only the upper section of the building remains above ground, its lower parts having been buried by landslides from the steep cliffs of the barranca above. 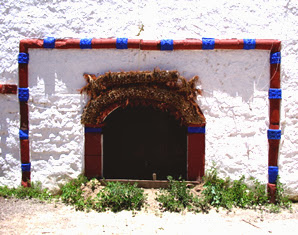 The original doorway is still below ground. Today, the old choir window, framed by an alfiz ornamented with carved rosettes and currently gaily painted red and blue, serves as the diminutive, arched entry. As some of these photographs show, the church is still subject to periodic flooding. 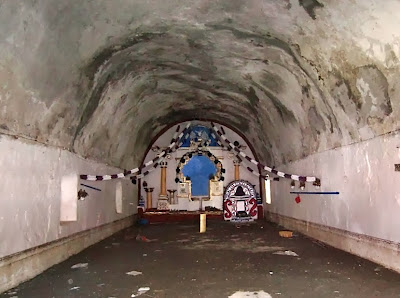 Inside the church, the low vault and the present side windows now almost at ground level confirm this partial infilling of the nave. Holes for the beams that once supported a raised choir can still be seen, also just above the floor.

In addition, a cave like aperture, set back on the south side of the church, is the eroded head of an archway that may formerly have fronted a raised open chapel, an identification supported by its elevation as well as the still visible sections of another carved alfiz (see diagram; red line indicated present ground level).

The rest of the convento, further to the south, is entirely buried.  Tales of eery howlings in the night, which once gave the mission the reputation of being haunted or possessed, were traced to missing dogs or other animals trapped in isolated sunken pockets in the old conventual rooms.

color images by the author, and courtesy of Niccolo Brooker and Diana Roberts
diagram © Pablo Escalante.


We accept no ads. If you enjoy our posts you may support our efforts
by acquiring our guidebooks on colonial Mexico.
Posted by Richard Perry at 3:17 PM