In our continuing exploration of the churches and chapels associated with the Augustinian priory of Metztitlan, we now shift our focus to the more modest missions, especially those with churchyard crosses of interest. 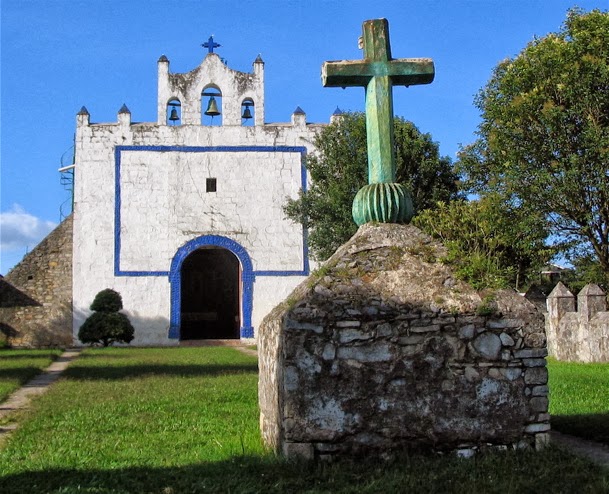 Nonoalco
Where Water is Spread
An attractive hill town in the Sierra Alta near Molango, Nonoalco is another former visita of Metztitlan.  As with other smaller churches in the area it stands at the end of a wide, walled atrium with grass lined stone walks, and with pointed merlons capping the walls and crowning espadaña of the church front.
In the regional pattern, the rounded doorway is carved and crowned by an enormous alfiz ornamented with foliated relief currently obscured by thick blue paint. 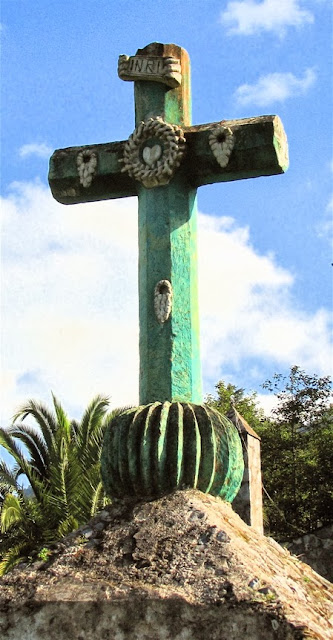 The Atrium Cross
Raised atop a pyramidal base and currently painted green, the imposing atrium cross has octagonal arms and shaft. In the regional pattern, its ornament is confined to an entwined Crown of Thorns at the crossing and prominent bleeding Wounds on the arms and shaft—all carved in high relief and painted white to stand out against the green. A tiny heart is embossed at the Crown’s center.
A bescrolled INRI cartouche projects at a jaunty angle from the head of the cross and although there are no finials as such the tips of the arms are embossed with a star motif. 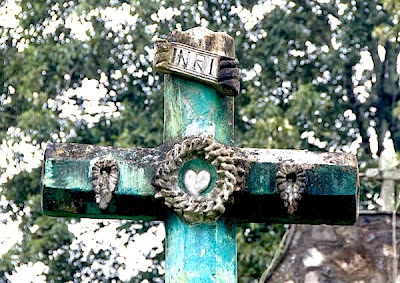 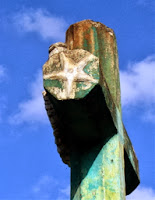 But the most distinctive feature is the pedestal on which the cross stands. Carved in the form of a ridged barrel cactus and painted realistic green, it reflects the local abundance of these succulents.
Its possible sacrificial symbolism has also been suggested, for the barrel cactus was used by the Aztecs to stretch human victims before cutting out their hearts.
The stepped base too, has an inset cavity for offerings, underscoring the sacrificial function.


We accept no ads. If you enjoy our posts you may support our efforts
by acquiring our guidebooks on colonial Mexico
Posted by Richard Perry at 10:41 AM