The Lost Retablo of Saltillo Cathedral

The first of our posts highlighting outstanding colonial altarpieces in northern Mexico focuses on the grand retablo of Saltillo/Monclova.
In previous posts we have traced and highlighted altarpieces* by the prominent and innovative Ureña family* of 18th century Mexican designers and retablistas, several of which have survived in places apart from their original or intended locations.
The retablo of Saltillo/Monclova is a case in point—the only surviving documented Ureña work in northern Mexico and, in our view, the finest baroque altarpiece in the state of Nuevo León. 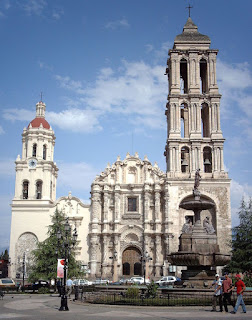 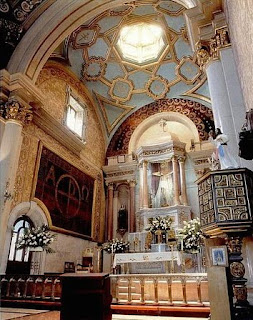 The cathedral of Saltillo;                          The Santo Cristo chapel today
In 1760, Juan García de Castañeda, Felipe de Ureña's son in law and ensamblador, contracted with the wealthy merchant Pedro de Nain, on behalf of the confraternity of The Santo Cristo of Saltillo, for a sumptuous retablo to display the venerated eponymous crucifix in the newly built and dedicated Capilla de Santo Cristo in Saltillo cathedral.
This retablo was duly executed by Castañeda  in the family workshop with the assistance of Felipe himself, who undertook to finish several Castañeda projects after his death in 1763. It was installed and fronted by a beautiful, chased silver altar commissioned in the same period, which remains in Saltillo cathedral.
The altarpiece stood in the chapel until the 1890s when, due to remodeling of the interior, it was placed in the nearby Santuario de Guadalupe where it remained until the 1920s, after which the retablo was dissassembled and placed in storage. 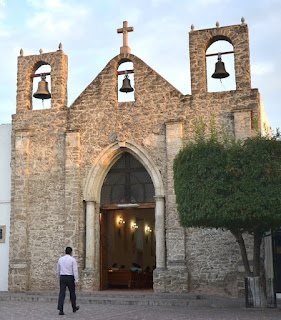 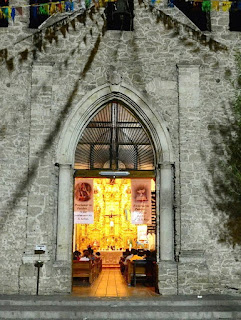 San Francisco de Monclova
In the 1950s, the venerable but modest barrio chapel of San Francisco in the nearby city of Monclova (Nuevo León) was renovated and reopened. The bishop of Monclova then undertook negotiations for transfer of the Ureña retablo to the new chapel, as sanctioned in the will of the late bishop Echeverria of Saltillo.
Finally reassembled and installed in 1967 and then partially restored in the 1980s, in 2012 the retablo underwent further restoration by the local chapter of Adopte Una Obra de Arte. 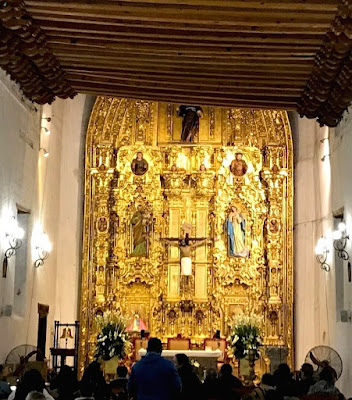 Glowing beneath the renovated beamed ceiling, the gilded retablo is now the centerpiece of the chapel. The bold Ureña design was intended to more effectively display the miraculous crucifix and place it in the biblical context of a Calvary scene—originally flanked by the Virgin of Sorrows and St John the Evangelist.
Although another crucifix and new figures of the Virgin, St. Joseph and St Francis have replaced the original statuary in its present location, the bold, polychrome reliefs of various saints and apostles in the oval medallions of the estípites and niche-pilasters remain. 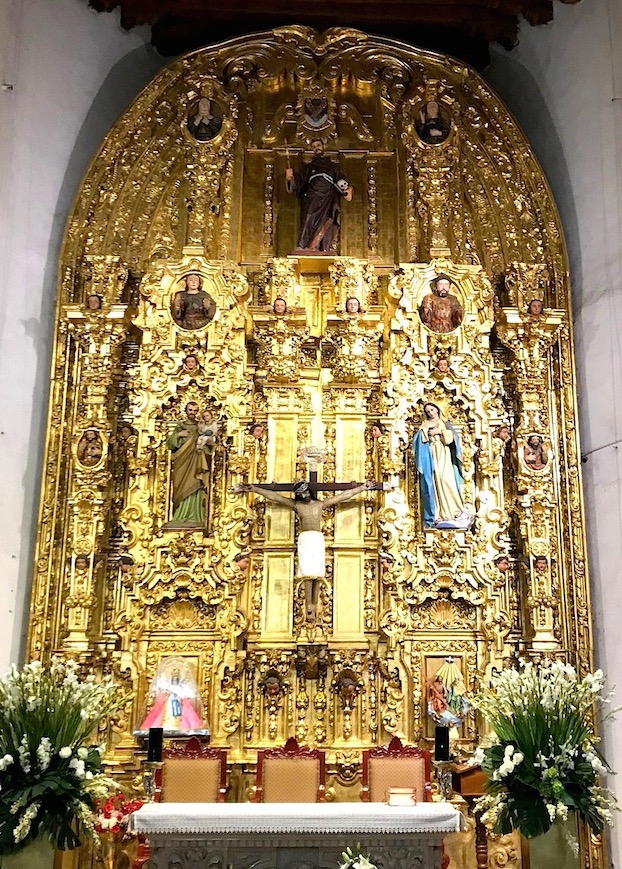 Richly ornamented and imaginatively detailed, the altarpiece is a classic Ureña/Castañeda work that draws on many influences—Plateresque, Mannerist, even Gothic—all integrated within a harmonious and coherent whole.
The Ureña hallmark of a relatively open, unstructured center effectively displays the crucifix, here flanked by broad, extravagantly scrolled niche-pilasters reminiscent of his grand earlier retablos of Belén and Regina Coeli in Mexico City. 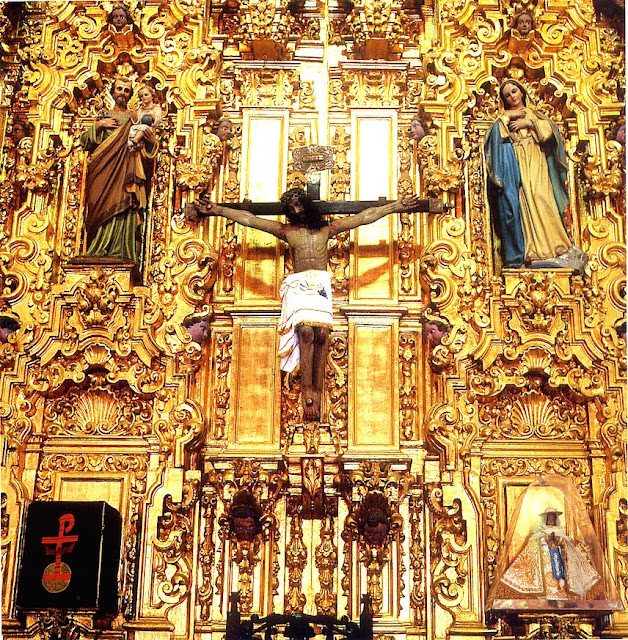 These are bordered in turn by slender but decorative estípites at the edges of the retablo that extend from the predella to the high, rounded gable, visually heightening the altarpiece. 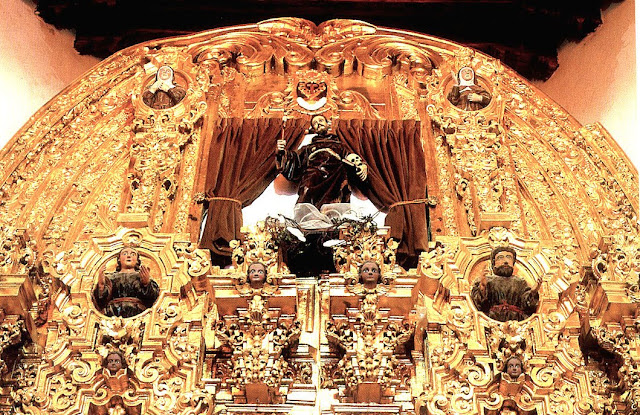 Both estípites and niche-pilasters are prominently inset with relief medallions, some with portrait busts of apostles, nuns and figures associated with the Crucifixion. 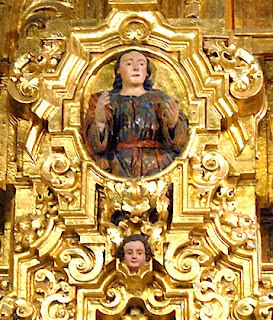 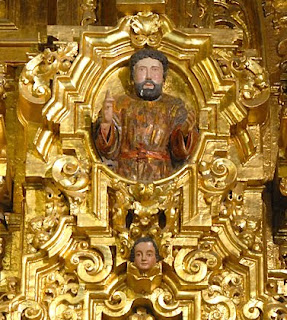 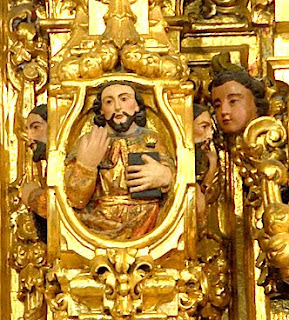 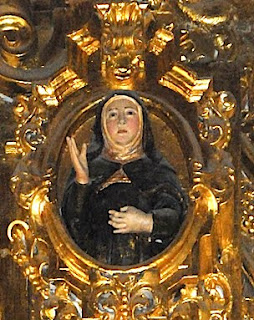 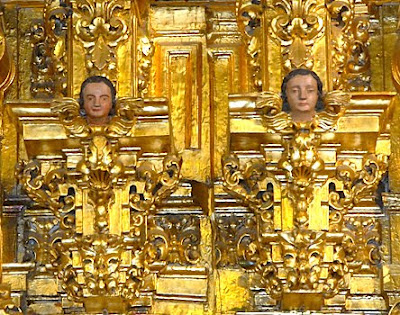 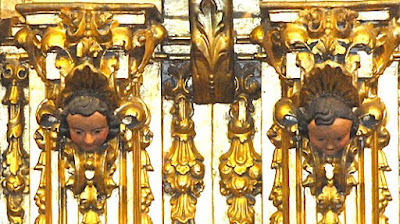 Recent restorations have focused on the numerous heads of cherubs and angels throughout the retablo. 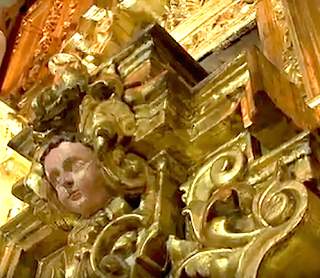 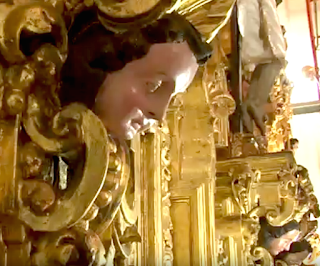 Thankfully, this superb altarpiece has not been lost or destroyed like too many other similar works of colonial art, a historic masterpiece of late baroque art that has survived for our delight and instruction.
*Known as El maestro transhumante, the "peripatetic master", Felipe de Ureña was the most influential of the Mexican born architect /designers to introduce and expand the Churrigueresque or barroco estípite style into New Spain. During the second half of the 18th century, together with family members, he was primarily responsible for the spread and subsequent evolution of this ornate late baroque style into cities across Mexico, especially along the silver routes north of Mexico City. Primarily an innovative designer and fabricator of altarpieces, he later adapted the barroco estípite style as it was called, for church facades. His elegant and distinctive designs are recognized as the  "felipense" style.
* Rayas Chapel; Aguascalientes; Cata; La Valenciana;
text ©2018 Richard D. Perry
color images by Niccolo Brooker and internet sources
Posted by Richard Perry at 10:06 AM