Continuing our series on the colonial altarpieces of Tlaxcala, we look at the extraordinary main altarpiece at Zacatelco. 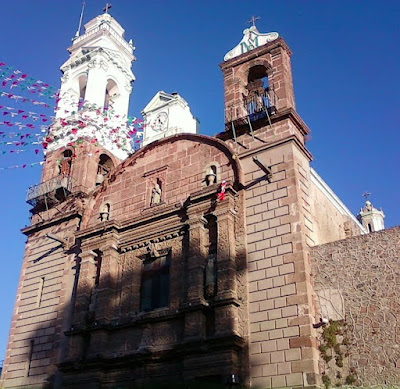 The city of Zacatelco (Grass Mountain) was founded in 1529 and soon after, the Franciscans established a mission here, visited from their monastery at Tepeyanco. Dedicated to St. Agnes, the visita was expanded over the years, notably with its grand atrium with corner posa chapels and crosses. But starting in the 1720s, the church was rebuilt on a larger scale.
Commissioning and construction of the grand main altarpiece, by the ensamblador José Mexicano Castillo, followed but was only completed by the turn of the 19th century.
Although some conservation measures were carried out in the mid-1900s, full scale restoration of the altarpiece was only completed in 2015.
Also dedicated to Santa Inés, the retablo is unique in the state of Tlaxcala for its hybrid character and grand scale. The three main tiers and gable are framed by highly ornate spiral columns—a throwback to the early 1700s—although flanked by slender, estípite style pilasters.

The most innovative aspect of the retablo, however, is its use of cylindrical outer niches or projecting showcases, which display paintings of six archangels—an unusual feature seen in some earlier Spanish altarpieces but to our knowledge unique in Mexico*. 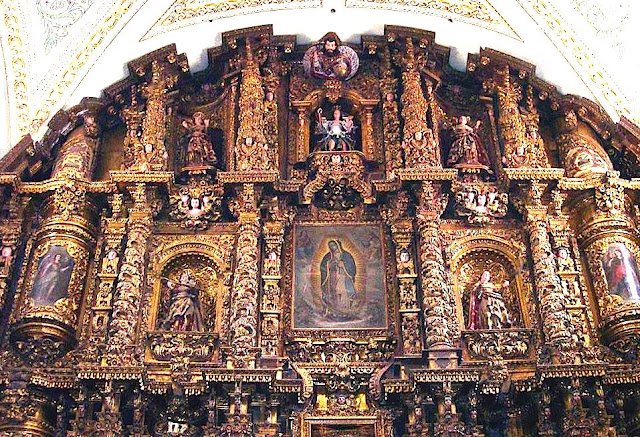 Apart from Peter and Paul on the first tier, the more conventional inner niches house life-size statues of mostly female saints, in company with the patron St. Agnes, whose figure occupies the center niche.  St. Joseph stands in the niche above her, while the Archangel Michael dominates the top tier below God the Father. 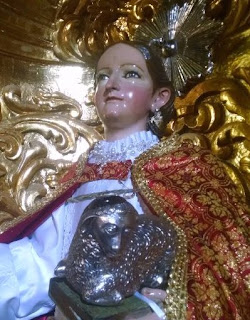 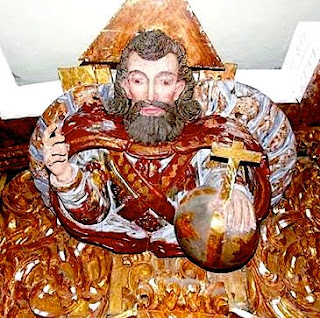 St. Agnes with lamb (detail)   God the Father
Aside from the archangels in the cylindrical niches, the only other painting in the altarpiece is a classic portrayal of the Virgin of Guadalupe on the upper level, attributed to the prolific baroque artist Antonio de Torres—a specialist in portraying the Virgin of Guadalupe—whose work we also saw at Parras de la Fuente. 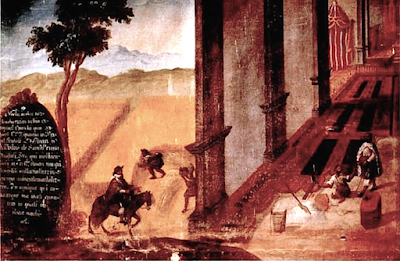 Another historic painting, now in the sacristy?, purports to show work under way on the retablo itself, together with a portrait of its sponsor, reputedly a mounted Indian noble, with a Nahuatl inscription—one more example in the regional tradition of native patronage of religious art. 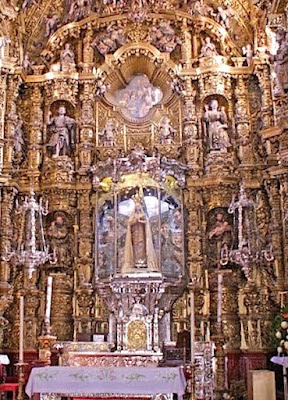 * The main altarpiece in the nearby Basilica of Ocotlan follows a related format, although more conventional statues occupy the niches rather than paintings.