San Agustín Acolman is one of our favorite places in Mexico. It was the first great monastery we encountered on our initial trip to Mexico in 1966, to which we have returned several times since over the years.
So, in a new series of posts, both on this site and on our sister blog on the murals, we revisit Acolman to draw attention to its many architectural and artistic treasures, using photographs taken on different occasions in the past.
The Augustinian priory of Acolman is distinguished by its innovative architecture, murals and ornamental sculpture. In this and forthcoming posts we review its varied aspects, including the facade—the subject of this post—as well the numerous carved stone reliefs and its famous atrium cross. 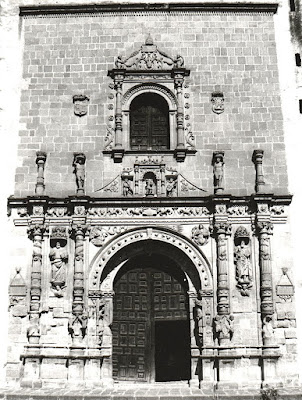 The Church Front
The towering church front at Acolman is braced by formidable buttresses and capped by a plain belfry, framing a sculpted facade of unexpected sophistication.
Called the "The Queen of the Plateresque” it is probably the earliest and certainly the most ambitious example in Mexico of the elegant late Renaissance /Plateresque style of 16th century Spain—as well as one of the most written about.
Startlingly innovative at the time, it exerted a powerful influence on many later Augustinian churches, notably at Atotonilco and Metztitlan in Hidalgo.

Although commissioned by the viceroy himself, Don Luis de Velasco, in the year 1560 according to the dedicatory plaque, the designer of this magnificent doorway is not known, although it was surely an experienced Spanish architect or skilled master mason, possibly Claudio de Arciniega, who worked on many major buildings including the cathedrals of Puebla and Mexico City. 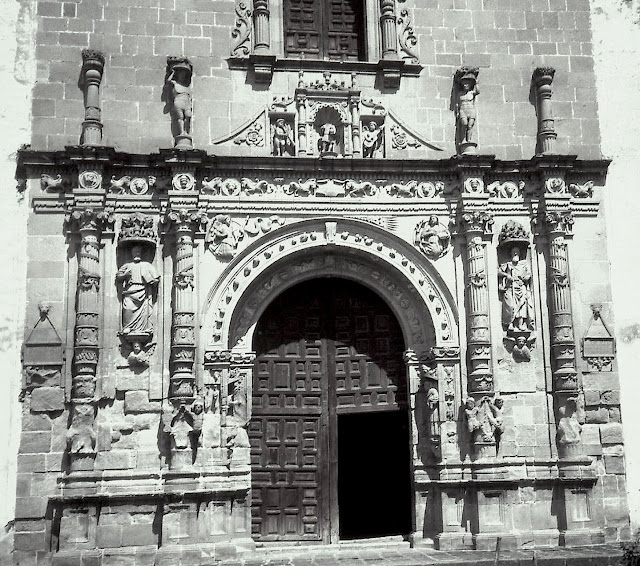 Crisply carved from gray-gold limestone, the lush composition was once ablaze with color, as traces of pigment in the recesses reveal. Unfortunately, the sculpture is blurred in the lower section of the doorway, up to head height. Time after time during the colonial period, flood waters surged through the low-lying monastery, washing away the carved and painted details. 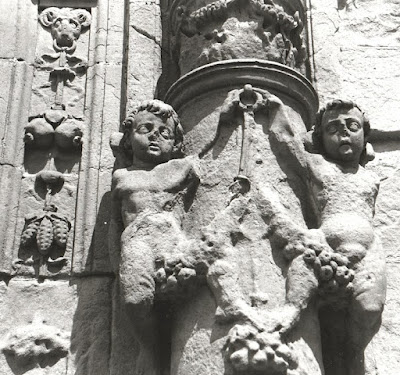 Ornate, fluted and garlanded baluster columns flank the triumphal arch of the doorway, although the twin cherubs on their lower sections have been melted like hot candle wax by the repeated flooding. 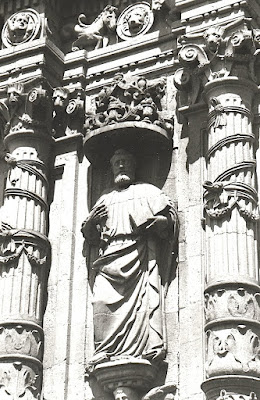 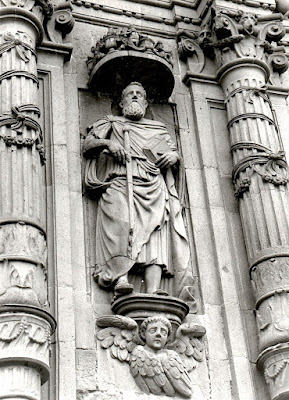 Luckily, the patrician figures of St. Peter and St. Paul, looking down from the crowned niches between the columns, stood safely just above the high water mark. 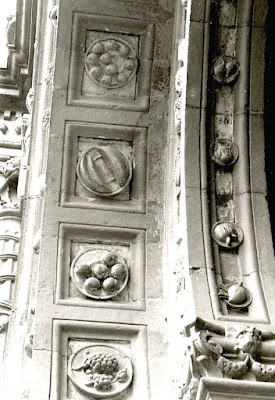 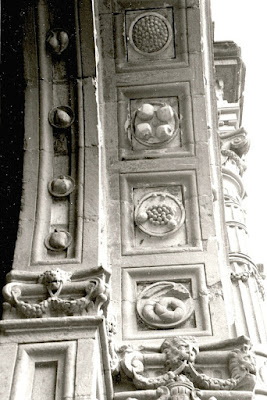 The richly sculpted doorway is the centerpiece of the facade, its paneled archway featuring two tiers carved with a ceremonial banquet of fruits, breads and other offerings including the ubiquitous Augustinian pierced heart. 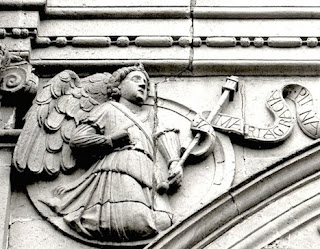 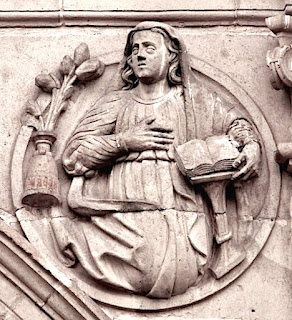 The spandrels above the arch tell the story of the Annunciation. The Archangel Gabriel, on the left, unfurls a banner of praise towards a startled Virgin Mary on the right.

Fanciful hippocamps or seahorses frolic along the frieze, between classical urns and grinning lions' heads. In the ornamental niche above the doorway, the headless young Christ strikes a magisterial pose, flanked by chubby cherubs playing the horn and viol. 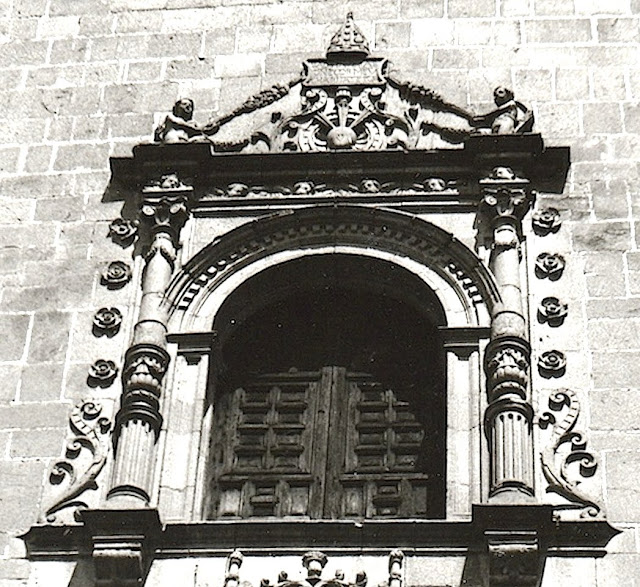 A frieze of winged cherubs' heads frames the choir window above, supported by Plateresque columns. At its apex, playful cupids tug on the beribboned insignia of St. Augustine. A plaque between the saint's miter and the pierced heart is engraved with a well known Latin aphorism from the Confessions: sagitaveras domine cor meum charitate tua; (you have transfixed Lord my heart with your charity) 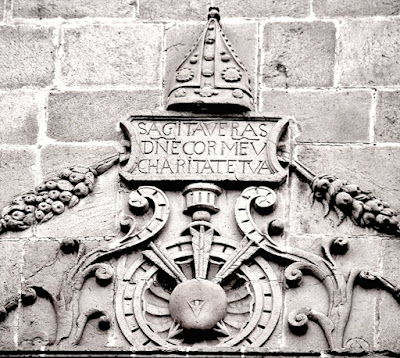 Two contrasting armorial reliefs of interest flank the choir window: the Spanish Royal arms on the left, and the Acolman place glyph on the right.
text © 2018 Richard D. Perry
b/w photography © 1986 by the author

posts in this series: The Facade; The Reliefs; The Crosses;
Posted by Richard Perry at 9:15 AM