In earlier posts in this series we have described a variety of early carved stone fonts, in Puebla, Tlaxcala, Michoacán, Oaxaca and Yucatan.*
Although we have looked at a few in Mexico city and state, we have not yet mentioned the monolithic baptismal font at the former Franciscan convento of Zinacantepec, west of Mexico City near Toluca. 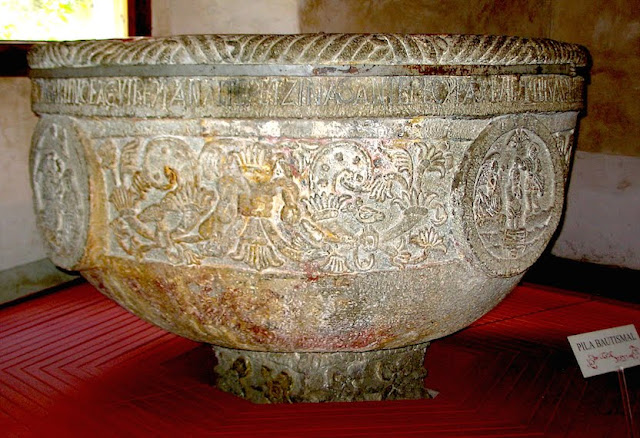 Until recently this monumental sculptural work still resided in the outdoor baptistry of the Zinacantepec convento, however it is currently on display in a more secure location in the Museo de Bellas Artes in Toluca.
The carved decoration of this enormous basin is arranged in several tiers. The Franciscan knotted cord forms the rim of the font, below which is a dedicatory inscription in native Nahuatl that translates as:

"In the year of Our Lord 1581 this baptismal font and baptistry were completed by order of the Guardian Fray Martin de Agüirre in the town of Zinacantepec."

The main section encircling the basin consists of a band or frieze of beautifully carved foliage in a stylized pattern that includes birds and speech or song scrolls issuing from the flowers—a frequent feature of early colonial carved and painted ornament in Mexico. 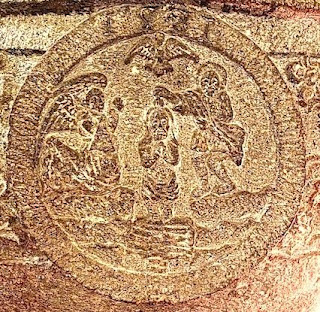 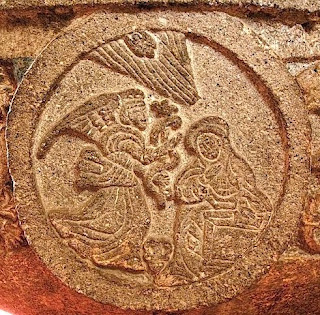 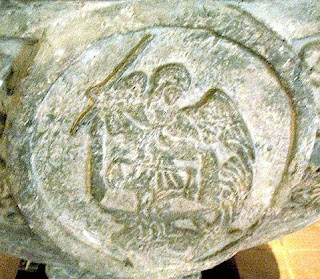 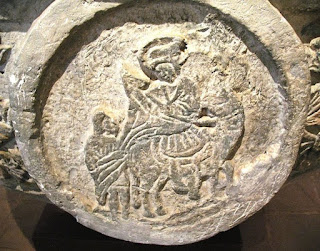 St. Michael;                                                       St. Martin of Tours
Of special interest are the four relief medallions prominently set into the frieze at intervals. They are also expertly carved with detailed, miniature scenes comprising a Baptism of Christ, The Annunciation, the Archangel Michael skewering Satan (San Miguel is the patron saint of the monastery), and St. Martin of Tours dividing his cloak with a naked beggar. (San Martín was the personal patron of Fray Martín de Aguirre)
The use of Nahuatl in such a prominent inscription seems a little surprising considering the patron and the late date, although of course all the carving is by indigenous craftsmen.
* Please see our earlier posts featuring early Mexican fonts: Oaxaca; Yucatán; Michoacán east; Atlixco (Puebla); Acatzingo; Tlaxcala; Cholula; CiudadHidalgo; Tepepan; Molango; Tecamachalco; Quecholac; Tecali; Cuernavaca;