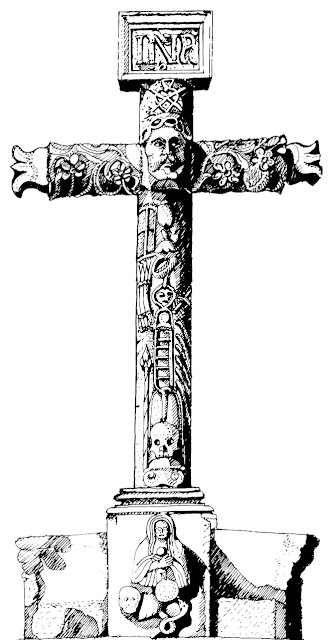 The Atrium Cross
Located across the road from the church, Acolman’s atrium cross is among the best known and most intriguing in Mexico. 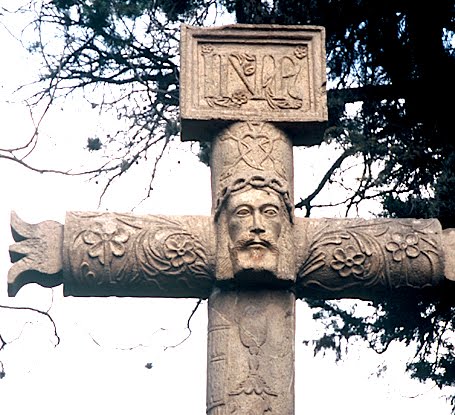 The noble, mask like Face of Christ projects from the crossing, carved in high relief with a chainlike crown of thorns over the brow. Above, the Augustinian emblem of the heart is pierced with flower tipped arrows.
Floral and vine reliefs cover the arms and back of the shaft, whose large petalled flowers mimic the wounds of Christ. Roughly formed fleur-de-lis finials terminate each arm, and a boxy plaque with unusual, foliated INRI letters heads the cross.

Numerous Instruments of the Passion crowd the main shaft, with reliefs of the Chalice at the top.

A large cockerel stands atop a festooned column below, with a ladder, nail and corn plant beneath.

A Skull projects at the foot. 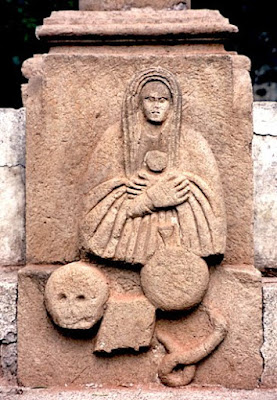 But the most interesting aspect of the cross is the relief ofthe cowled Virgin of Sorrows. at the base of the cross,
whose ambiguous features have excited much speculation.
A circular relief or pectoral disk above her large, crossed hands may represent her heart, recalling the Aztec tradition of inserting an obsidian disk to represent the heart or soul of the image. At her feet are a skull, a globe or capped flask, a book or cloth, and a writhing serpent—objects with symbolic significance in both the Christian and Aztec sacred traditions.
Behind the Virgin, an archway opens to a simulated miniature sepulcher, a feature also seen in several Michoacán crosses. 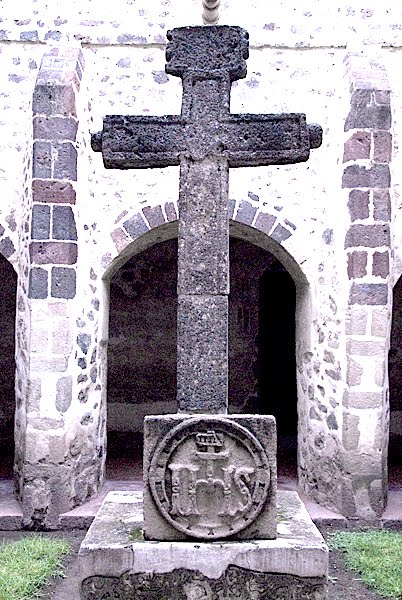 The Cloister CrossA rugged black pumice cross in the older, front cloister, may be the earliest stone sculpture at Acolman, possibly dating from the Franciscan era before 1539.
Although most of its details are badly eroded, including the INRI inscription, this imposing cross is mounted on a block like pedestal which is elegantly carved with the initials of Christ that incorporate a miniature cross and the dove of the Holy Spirit.

Our previous posts on Acolman: The Facade; The Reliefs; The Murals;
text, graphics and photography © Richard D. Perry
Posted by Richard Perry at 1:24 PM