As an addendum to our recent series on the frontier churches of Yucatán, many of which feature the carvings of the Mayan sculptor Pascual Estella, we draw attention to his documented work at Hunucmá, in the northwestern corner of the peninsula. 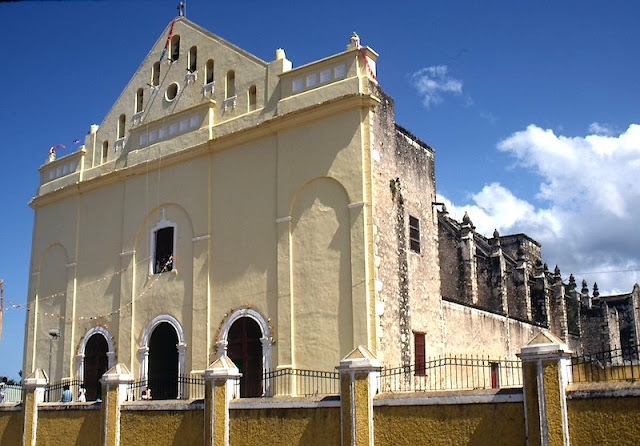 The broad aisled church at San Francisco Hunucmá is raised up on an enormous platform that stands a meter or more above the surrounding plaza. The size of this platform indicates that this was once a major Maya ceremonial center, although no ancient structures now remain.
Much of the present church dates from the later 18th century. The nave is long and wide, supported by exceptionally deep buttresses on both sides and covered by Yucatan style log vaults. The broad neo-classic facade, with its identical triple entries and clean, whitewashed front is a dominant local landmark. It extends beyond the nave to the full width of the side buttresses, rising up to a spectacular triangular espadaña, pierced by nine bell niches along the gable. 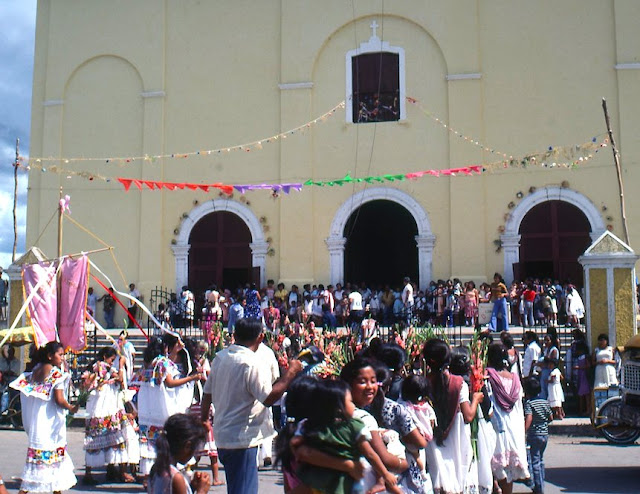 Every February, during the festival of Candelaria, the famous image of the Virgin of Tetiz travels in procession to Hunucmá from her home, enthroned on a weighty anda and borne on the shoulders of designated cargadores—members of local fraternities and gremios carrying their estandartes or banners.
There, amid great celebration with fireworks, music, the raising of banners and the throwing of confetti, she presides in state for over the town fiesta on a special altar for two weeks. 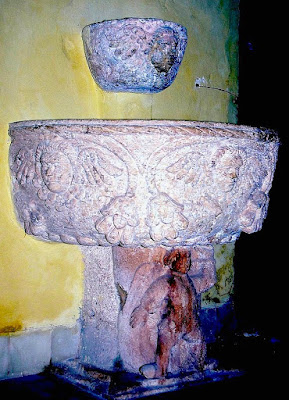 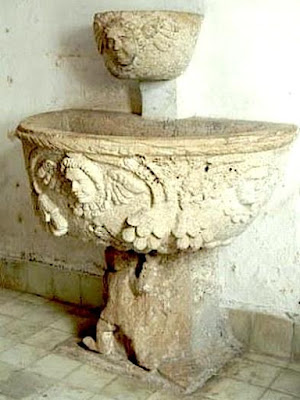 Items of special interest to us here are the ornate 18th century baptismal font and holy water basin inside the church, both boldly carved with cherubs and outsize foliage—the work of the Mayan sculptor Pascual Estrella and the only examples of his craft outside the frontier area of eastern Yucatán.