In a previous post we described the musical angels around the dome of the priory church of San Agustín. Here we look at the sculpted cloister of the adjacent convento, now housing the Querétaro Art Museum. 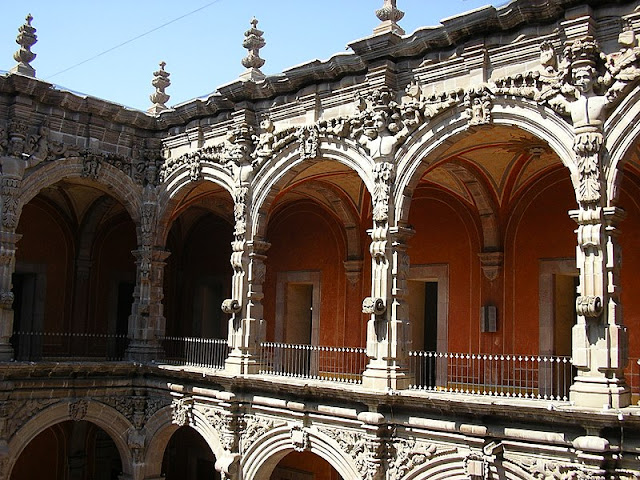 The Cloister
The sculptural complexity of the priory reaches its climax in the cloister (1731-45)—one of the most exciting and exotic baroque spaces in Mexico. Painstaking renovation in the late 1980s, in preparation for its new role as the Querétaro Art Museum, has restored this sculpted space to its former glory.

The two stories of the arcaded cloister form an enveloping display of dynamic stone carving, whose esoteric imagery, drawn from Italian Mannerist sources, unites voluptuous figures and bold ly modeled foliage into a new and original sculptural synthesis.
Along the lower bays, slender herms with bulging breasts and tapering bodies divide the paneled piers, their heads and feet inclin ing towards the center of the patio.

The faces of the corner figures are lined and bearded, while the others are more youthful. Fantastic birds and beasts, carved in exuberant high relief, peer out from lush foliage in the intervening spandrels. Of particular interest are the scalloped key stones of each arch way, where cameos of Augustinian saints alternate with emblems of the order. 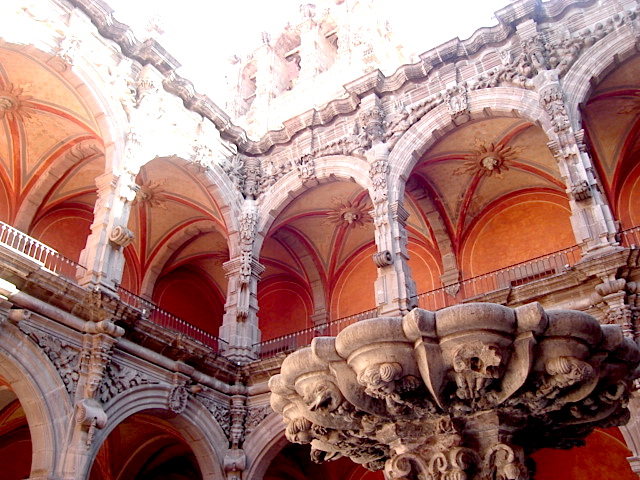 The upper arcades are even more fantastic. An exotic sequence of caryatids is mounted atop the piers of the arcade, also intricately carved with volutes and geometrical strapwork. 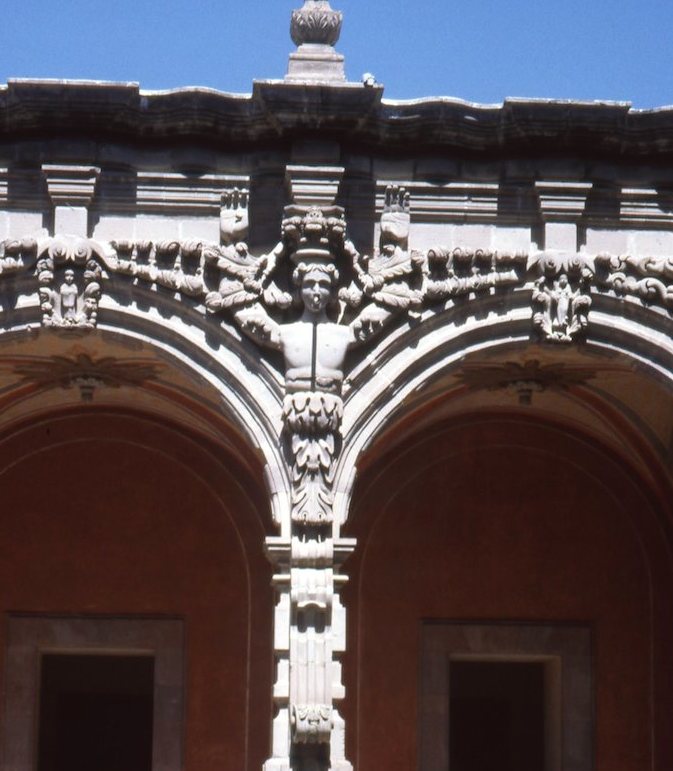 Part human and part plant, these massive, broad-breasted figures have virile faces and wear foliated skirts. Tiny, playful cupids peek out from behind their elaborate feathered headdresses. But the most curious features of the caryatids are their giant upraised arms, whose obscure hand gestures have been interpreted as symbolic of the liturgy of the Eucharist.
Portraits of Augustinian saints, martyrs and hermits are carved on the key stone cartouches, each with his individual gestures and at tributes. Pomegranates frame the medallions, while a melange of vines, foliage and grotesque animals trail across the spandrels, echoed by the rhythmic, undulating cornice that crowns the  cloister.
The impact of all these extraordinary sculptures must have been even greater in times past when they were painted in black, red and other hues.
Although many interpretations of this iconography have been put forward—variously linking the imagery to the Catholic liturgy, the Passion of Christ and the aspirations of the Augustinian order—what finally impresses is the joyful virtuosity and imagination of the artists who created this unique sculptural environment.
Now reborn as the Querétaro Art Museum, the convento displays a first class collection of Mexican religious painting and sculpture. Choice works of colonial art include a splendid series of Rembrandt-like portraits of the Apostles by the baroque master Cristóbal de Villalpando, as well as a stunning group of gory, early colonial crucifixes in the Pátzcuaro tradition.