In previous posts we have looked at the folk baroque churches of Lake Cajititlan, in the villages of Los Reyes, San Lucas and San Juan Evangelista, as well as nearby Tlajomulco.
In addition to the wealth of popular architectural sculpture and statuary created by the Sebastián family of talented local masons, numerous carved stone crosses adorn the walls and patios of various colonial buildings in the lake settlements.
While most of these crosses take the form of wall reliefs, others are freestanding atrium crosses—all dating from colonial times.
We first look at two latter examples, located in Los Reyes and San Lucas.


Los Reyes Cajititlan
Cut from the pitted brownstone of the area, this cross stands atop an ornamental pedestal in front of the basilica, carved with shells and foliage.
Recessed within projecting borders on the front,  a “cross within a cross” motif carved in a bow shaped profile extends along the arms and shaft. At its axis, it transfixes a stylized, sharply petaled motif signifying a Crown of Thorns.
Three deep holes on the arms and shaft represent Christ's Wounds, providing for the placement of metal or wooden spikes. A scrolled INRI plaque, in the form of an open book, caps the head of the cross.


On the reverse side, a similar cross within a cross also pierces a floral motif with four, arrow shaped petals at the crossing.  The vertical groove shoots down the entire length of the shaft like an arrow, complete with feathers at the top, while the lines incised along the arms terminate in round buttons that echo the pearl finials.

The little church of San Lucás, opposite Los Reyes on the south side of the lake, also has a weighty stone atrium cross, also fashioned from oolitic local limestone.
Less complex and artful than the Los Reyes example, it also employs a cross-within-a-cross format. It lacks a decorative head or finials, and is carved on the front only.

Rosettes are cut into the neck and crossing with a floral motif on the upper shaft, while Sun and Moon reliefs appear at the ends of either arm.  A few conventional Passion objects appear on the shaft, notably a Ladder, Spear, and three Nails. 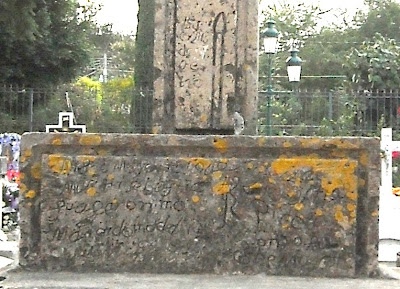 Incised inscriptions appear on the foot and base of the cross with several dates.  Although not entirely complete, they are carved in a script that indicates their colonial origin—no doubt in the 1700s like the 1767 inscription on the sacristy doorway (see our earlier post on San Lucas.)

For more information on the colonial arts and architecture of Jalisco, consult our guidebook, Blue Lakes & Silver Cities,
available from Espadaña Press

Look for our forthcoming guide to Mexican Carved Stone Crosses.
Posted by Richard Perry at 4:47 PM