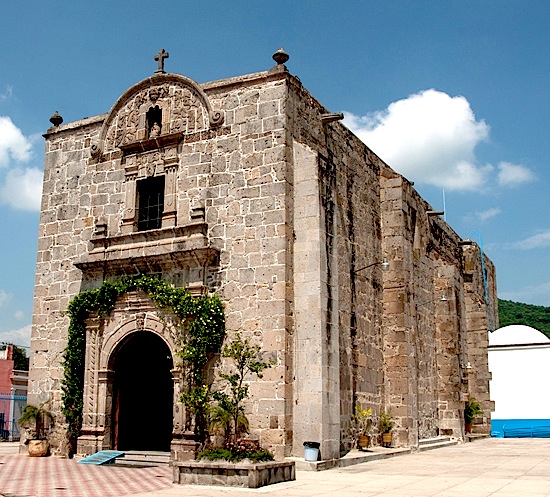 As part of our series on the churches and chapels of the Lake Cajititlan region, we include the closely related, nearby chapel of La Purísima Tlajomulco.
Before the arrival of the Spaniards the Kingdom of Tlajomulco was the preeminent indigenous power in the region. And in the 16th century Tlajomulco was the principal Franciscan mission town in the Lake Cajitítlan region, but following destruction of the main church here a new doctrina or missionary hub was established at Los Reyes Cajititlan.
However the former hospital chapel of La Purísima still stands in Tlajomulco, although with a later facade added in the 18th century. 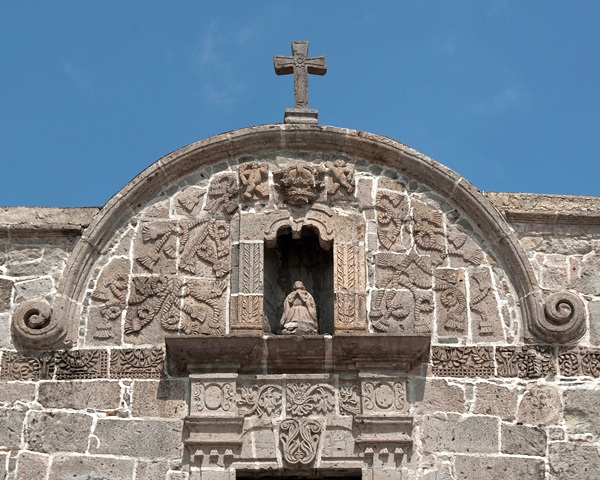 Although the chapel retains its austere 16th century profile—the entry and choir window are soberly classical, albeit enhanced with panels of carved foliage—the crowning gable is more in the Jaliscan baroque style of the churches around Lake Cajititlan.
Reminiscent of the rounded gable at San Juan Evangelista Cajititlan, with its scrolled cornice and stone cross, it is also a showcase for inventive stone carving.
A large, complex Virgin's crown, flanked by a pair of cherubs, stands above the niche containing the statue of La Purísima, while the spaces on either side are filled with an unusual filigree design composed of intertwined Franciscan cords ending in outsize tassels. 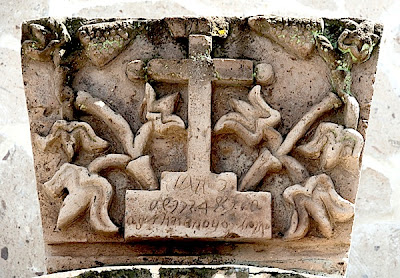 Dated cross relief and statue of St Raphael
Fine statuary, along with a dated cross relief on the churchyard fountain, again demonstrate the high quality and imagination of the stone working throughout suggest the presence here of skilled masons and sculptors, quite likely members of the noted Sebastián family from nearby Cajititlan.

Throughout Mexico, today as in colonial times, the Christmas season comes to a climax on January 6th, the Day of the Three Kings or Los Santos Reyes. Presents are exchanged amid communal festivities and traditional religious observances.
Although the main regional celebration take place at Los Reyes Cajititlan, the inhabitants of Tlajomulco also commemorate Epiphany, as they have done since early colonial times, and decorate the church in their own festive manner.
text © 2012 Richard D. Perry;
photographic images ©Richard Perry & Niccolo Brooker. All rights reserved.
For more information on the colonial arts and architecture of Jalisco, consult our guidebook, Blue Lakes & Silver Cities, available from Espadaña Press

Posted by Richard Perry at 5:06 PM