The ancient Tarascan hill town of Charapán, in the volcanic western highlands of Michoacan, is home to a family of carved stone crosses planted among the town's several churches and chapels.
Although there is a family resemblance, each cross has its own distinctive character. All but one of the crosses bear dates in the 17th century, despite some later alteration or recarving that may have taken place. 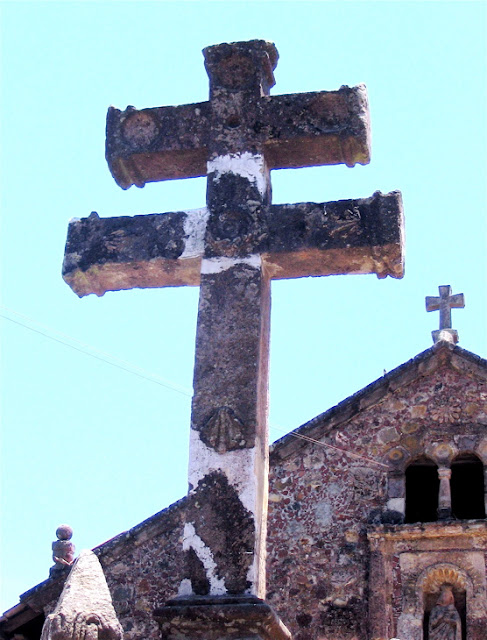 The Belem Cross
The most prominent of the Charapan crosses is a double barred cross of Lorraine, which stands in front of the chapel of Our Lady of Bethlehem, a former hospital chapel located behind the main church of San Antonio.
Mounted on a square pedestal once set with decorative corner merlons, the basalt cross is minimally carved on one side only. A much eroded woven Crown marks the axis of the main crosspiece. Vestigial streams of blood from stylized Wound reliefs carved at each end point inwards like gnarled hands. A third, shell shaped Wound is the sole relief on the shaft.
On the upper bar, the remains of a multi-petaled rosette occupy the crossing with a large, deep hole drilled in the center. This may have once framed an inset stone, as well as the shallow, recessed disks in the arms and neck. Square moldings with abbreviated, flared finials terminate all the arms and the head of the cross.

The San Antonio Cross
Set on a high, square pedestal in front of the rebuilt main church, this cross is similar in style to the Belém cross, except for its single crosspiece.
The carved reliefs, recessed within a raised border, also repeat the pattern of an entwined Crown at the axis flanked by pierced, bleeding Wounds at the end of each arm and on the shaft.
Delicate rosettes are carved beneath the arms, and matching finials cap the arms and head, although here an INRI plaque surmounts the cross at an angle. Ornately Franciscan insignia are emblazoned on the pedestal together with the date 1655. 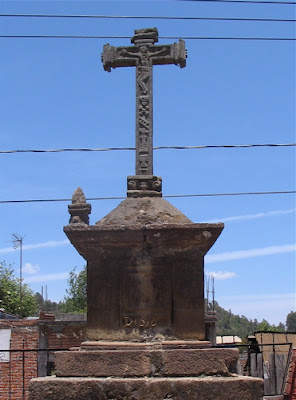 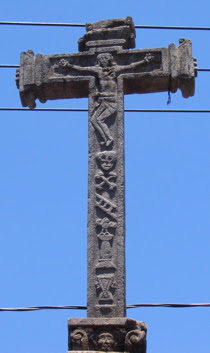 The Cross of Santiago
Built on an elevated site that overlooks the town and the main church and chapel, the painted barrio chapel of Santiago boasts the most lavishly ornamented of the crosses.
Raised like the others on a large square base that still retains a single corner merlon, the cross faces the carved 17th century chapel doorway and is inscribed with the date 1676.
The most distinctive feature of the Santiago cross is the full body of Christ Crucified twisted in agony at the crossing—a rare portrayal seen on few atrium crosses, notably those at San Bartolo Pareo and Tepetomatitlan (Tlaxcala). Deeply undercut within the raised outline of the cross, this crude but dramatic figure is especially striking.
So too are the accompanying reliefs of Passion symbols that project boldly along the shaft—a Ladder, a Cockerel with Column, a stylized Chalice and a mask like Skull with crossbones. A second Skull grins at the foot of the cross. Slab finials with relief rosettes cap the head and arms.
An eroded relief of St. James, the patron saint, on horseback with sword and banner, is embedded in the base pedestal, flanked by outline reliefs of the Archangel Michael and a female saint, probably St. Anne. 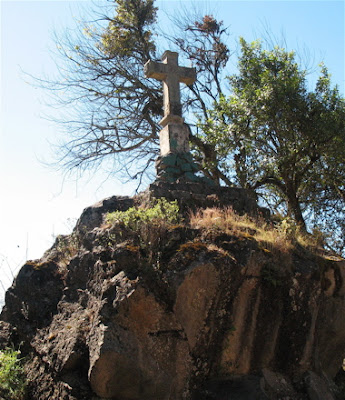 The Pantheon Cross
Perched Calvary style on an outcropping beside the town cemetery, this neglected cross has a more modern look than the others, even it portrays more traditional elements in the manner of the Santiago cross. 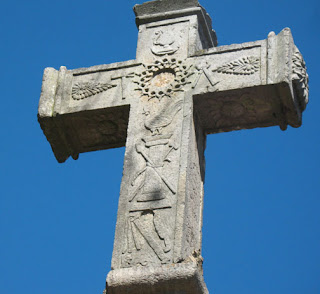 Passion reliefs are sharply cut and harmoniously spaced within the raised borders. Stylized Wounds like arrowheads on the outer arms point inwards to the spiky Crown at the crossing, above which appears an elegant Ewer and basin combination.
A Column with crossed Spear and Reed capped by a long tailed Rooster dominates the shaft. Multi petaled floral reliefs adorn the flared finials and underarms of the cross.

For more information on the colonial arts and architecture of Michoacán, consult our guidebook, Blue Lakes & Silver Cities, available from Espadaña Press

look for our new series on the Missions of Michoacán
Posted by Richard Perry at 4:49 PM