This is the fourth in our series of distinctive Mexican santos. 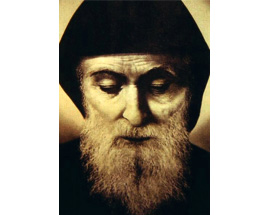 One of the more exotic saints that Mexico has made its own is San Charbel Makhlouf, a 19th century Maronite Christian monk and hermit from Lebanon.

Introduced in relatively recent times by Lebanese immigrants, he has achieved a popularity beyond the Lebanese community, and his shrines and altars can be found in numerous churches across Mexico.
In recognition of his widespread following he was beatified and later canonized? by Pope John Paul ll in the 1970s.

He is usually shown as an imposing figure with a white beard, downcast eyes and both arms raised. He is invariably clad in a black, hooded robe.

A San Charbel tradition unique to Mexico is his devotees' custom of hanging colored ribbons (listones), inscribed with their wishes, from his handily outstretched arms, which immediately distinguishes him from other santos in the church.

For previous posts in this series see our earlier pages on St Peter Martyr, St Rose of Lima and St Dennis
Posted by Richard Perry at 12:48 PM