The Crosses of Tepoztlán

Occupying a dominant site in the center of the town, below the celebrated hillside Aztec shrine of El Tepozteco, Natividad Tepoztlán was the best known Dominican house in the present state of Morelos. Among the numerous colonial monuments in its environs are several stone crosses of interest and even mystery. 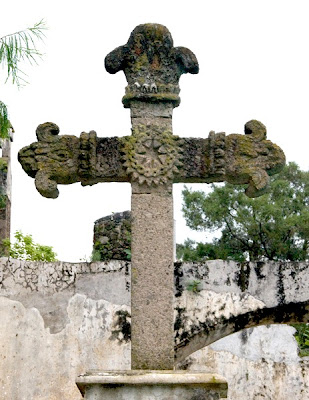 The Atrium Cross
This large, weatherbeaten cross is mounted in the great walled atrium, in front of the ruined former open chapel beside the church.
Set on an imposing, neoclassical base carved with rosettes, the rectangular cross bears a single relief—an intricate Crown of Thorns adorning the crossing whose complex, stylized design takes the form of a woven central chain with spiky inner and outer serrated rings. The star shaped inner ring may have once held obsidian inserts.
Ornate fleur-de-lis finials with elaborately scrolled and folded leaves sprout from  the stubby arms and head of the cross. 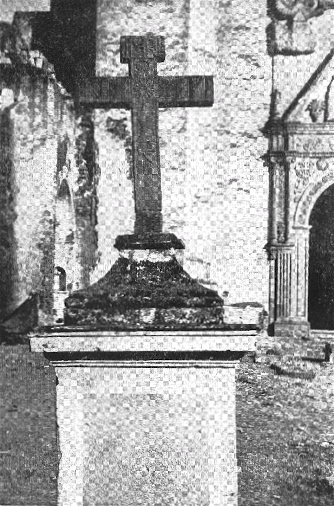 The Lost Passion Cross
Formerly, there were two carved stone crosses in the atrium. This second cross was mounted in front of the church within living memory, was more intensely carved with Passion symbols, and may have dated to the 16th century.
Old photographs show a sunburst style relief at the crossing with nail like rays, not unlike that of the present atrium cross. It is set above a Chalice on the upper shaft, and with its miniature cross above and underlying stand, it was probably intended as a representation of the Host.
Reliefs carved within raised borders along the shortened arms and shaft include a small woven Crown on the neck, Ladders on either side of the Host, Hammer and Pliers on the arms, and a Lance on the shaft. 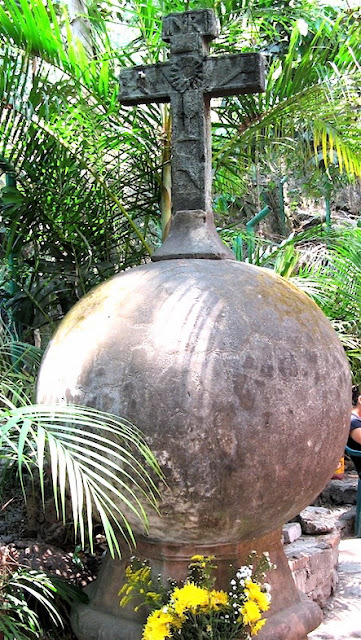 The Globe Cross
Yet another extant cross, remarkably similiar to the Passion cross although simpler and with significant differences, stands on a giant stone globe on the trail up to the ancient Tepozteco shrine. The arms and shaft are reduced and the reliefs cruder; there are no Ladders or Crown on the neck.
Reputedly, the cross marks the spot where the Dominican Fray Domingo de la Anunciación baptized the lord of Tepoztlán in 1538. 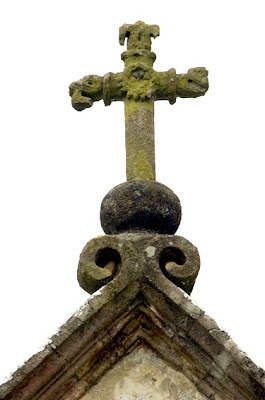 The Posa Cross
A smaller, much eroded cross, in the same style as the atrium cross but with an octagonal shaft, stands on a globe atop the posa chapel in the northwest corner of the atrium.

for more on the old monasteries of Morelos and Mexico, see our classic guidebook
Posted by Richard Perry at 11:11 PM