Despite its idiosyncratic Baroque/Neoclassic front, the parish church of San Jerónimo, located on the Hidalgo/Mexico State boundary, was originally part of a Franciscan mission founded in the 1540s.

This is the first of three posts on this intriguing church and its precincts.

The Facade
Although significantly rebuilt in the early 1700s with even later changes following earthquakes, some of the original tezontle stone work in the facade remains,
Multiple tiers of paired columns and pilasters, fashioned in a variety of ornamental textures, rise towards the central gable, flanked by sculpture niches—some still containing battered statuary.

The facade also portrays a curious assortment of religious sculptures and reliefs.

As a plaque in the niche above the doorway indicates, there was a major earthquake here a century ago, probably when most of the statuary was damaged.  In fact the whole front gives the impression of having been rebuilt or rearranged. A primitive relief of the Patron, a penitent Saint Jerome, stands behind the plaque.
Often believed to represent the Virgin Mary, this statue in the upper facade is now thought to be that of St. Rose of Lima, a Dominican and the first American saint. However, she is rarely if ever portrayed in facade sculpture outside of Dominican churches—especially puzzling for a Franciscan church like San Jerónimo Aculco. 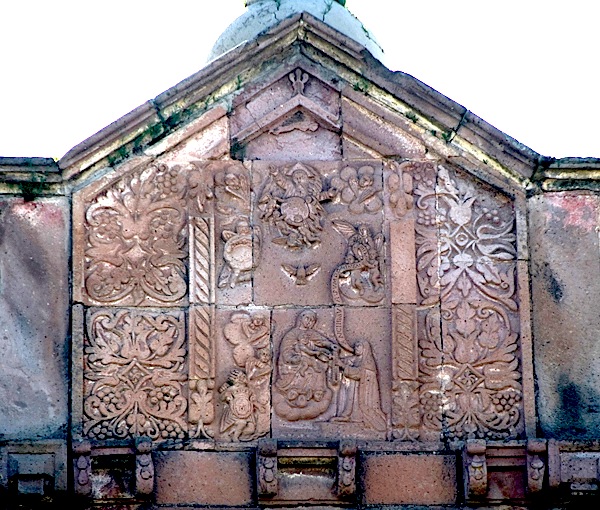 The Gable Sculpture
Nevertheless, the gable seems intact and is notable for its large, unusual relief in which a cowled nun receives the Rosary from the Virgin Mary, while the child Jesus touches her outstretched hand—another portrayal more usual in Dominican churches.

A ribbon like banderole issues from the nun's mouth, upheld by angels.
Above the hovering dove of the Holy Spirit, God the Father gestures with arms outspread at the top of the relief, his customary globe surrounded by cherubs. 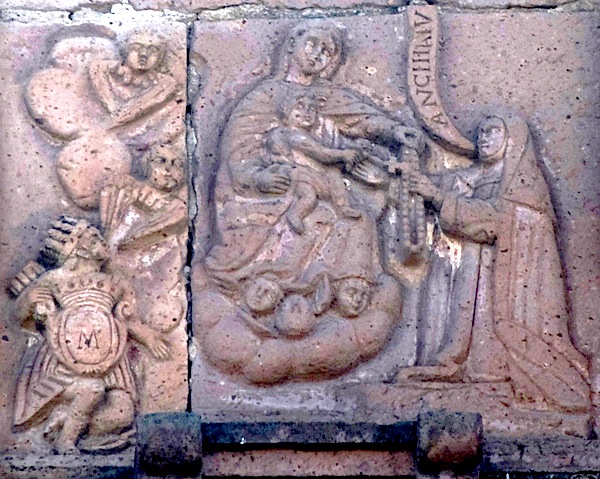 The identity of the nun receiving the rosary from the Virgin Mary on the facade is unclear. It may portray St. Rose of Lima, who appears elsewhere on the facade, or, in light of the altarpiece inside the church, it may represent the celebrated Carmelite reformer and Discalced founder Santa Teresa of Avila. An inscribed ribbon is occasionally shown in portraits of the saint.

Although not entirely clear or even correct, the inscription may signify " My Lord, I am thy new handmaiden," — a variant on the traditional words of Mary to the Archangel Gabriel at the Annunciation.

Distinctive figures on the left include an angel holding a halo or rosary, and below, a native character with a feather headdress who might represent a local lord. Alternatively the M on his armorial shield may indicate San Miguel, who is customarily shown with a plumed helmet, Roman skirt and buskins.