Several exciting new exhibits relating to the colonial arts and architecture of Mexico are scheduled for early Twenty Thirteen (2013) in Texas.

Two shows of stunning photographs by the celebrated Dallas photographer Carolyn Brown (in which your editor has been involved) will open this month and run together through the New Year: 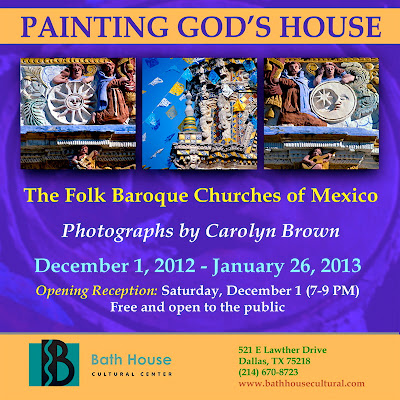 The first exhibit will feature Carolyn's brilliant photographs of "folk baroque" painted and tiled churches in Puebla and the Sierra Gorda regions of Mexico. This will be shown at the Bath House Cultural Center, a prestigious venue in Dallas, from December 1st through January 26 2013. 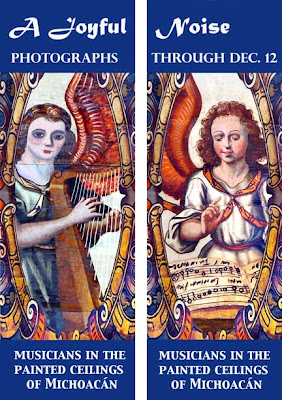 The second show, to be mounted in the refurbished gallery at St. Matthews episcopal cathedral, also in Dallas, will reprise this charming, well received exhibit, which features large scale images of angels and other musicians playing various colonial instruments taken from the colorful painted church ceilings of western Michoacán.


A selection of these photographs, together with additional images from Carolyn's extensive archive documenting colonial Mexican art, will also be shown in spring exhibits planned for the Museum of Biblical Art, also in Dallas.  Details to follow.
It is hoped that a selection from these shows will also travel to the Nettie Lee Benson Library in Austin, Texas, to be exhibited later in 2013.  An exhibit in Mexico is also on the cards.