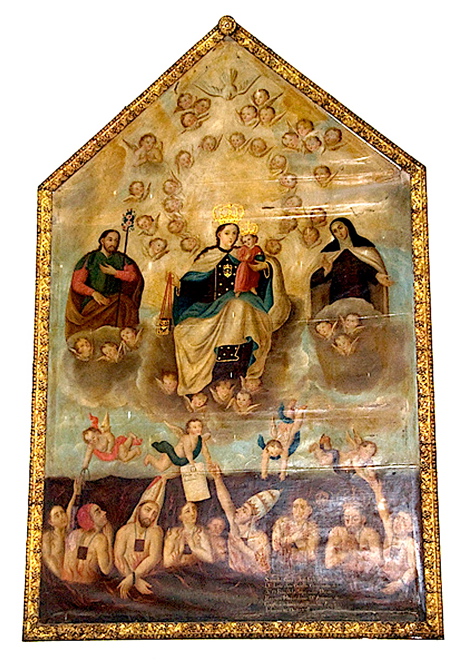 For our second post on San Gerónimo Aculco, we consider two altarpieces inside the church. The major attraction here is the large, recently conserved painting of Purgatory, or Las Animas.

The notion of Purgatory, by which sinners could expiate their sins by prayer, including the prayers of others and the intercession of saints and holy figures, was a firmly held Catholic tenet adopted by the Council of Trent  in the face of Protestant disbelief.
In the 17th century it enjoyed a great vogue in the New World and several popular saints, including the Virgin Mary in various guises, were portrayed as divine intercessors on behalf of the suffering souls.

In this particular version the intercessor is Our Lady of Mt. Carmel, flanked by Teresa of Avila, the reformer and founder of the Discalced Order, and St Joseph, to whom the Carmelites were especially devoted.

The crowned Virgin displays the Carmelite insignia and holds a brown scapular—a form of devotional apparel special to the Order. Together with the rosary, the scapular was popularly associated with indulgences and salvation which accounted for much of its appeal in colonial Mexico. 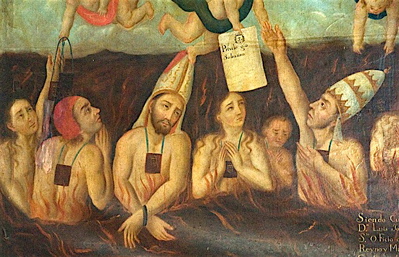 In the lower register, the naked souls of kings, popes and bishops are arrayed in the flames of Purgatory, all wearing scapulars, while an angel above displays a copy of the Sabbatine Privilege—a controversial dispensation allegedly granted to observant Carmelites by the 14th century Pope John 22.

According to legend the Pope had a vision of Our Lady granting that through her special intercession She would personally deliver the souls of Carmelites from Purgatory on the first Saturday after their death ("Sabbatine" means Saturday), providing they fulfill certain conditions including the wearing of the brown scapular.

The dedicatory inscription on the painting mentions a judge of the Inquisition, so it may commemorate some special event:

"Being Priest and Ecclesiastical Judge, Don Luis José Carrillo, Commissioner of the Holy Office of the Inquisition of this Kingdom and Majordomo, Don Antonio de Cortizo.? made this Retablo A..(name ?)  February 16th of  1789?" 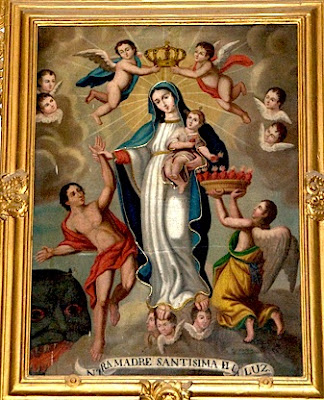 The Virgin of Light

This post colonial painting in the nave is another contrasting but classic Marian representation, that of The Virgin of Light (Nuestra Madre Santisima de la Luz)

In this portrait she is shown as prescribed in the history of the devotion:

In the first quarter of the 18th century, a Jesuit priest in Palermo, Sicily, wished to have a special representation of the Virgin Mary painted to take with him and display as he preached throughout the island. He consulted a devout lady who had the reputation of experiencing frequent visitations from the Virgin Mary, and asked her for guidance.

This was granted, and in her dream, the Virgin described exactly how she wished to be represented: to appear in a glorious light, surrounded by a troop of seraphims. She would wear an imperial crown and a girdle adorned with jewels that "surpassed the beauty of the stars" —her girdle is very modest in this portrait!
On her shoulders was to be a blue mantle, and on her left arm she carried the child Jesus.
With her right hand she lifted a sinful youth from the fearsome throat of Hell, and on the other side a kneeling angel held up a basket filled with hearts which he presented to the Divine Child.  She then said she wished to be called by the name of "Most Holy Mother of Light" and repeated it three times for emphasis.

The prescribed portrait, painted in 1722, was brought to Mexico ten years later and found a permanent home in the Jesuit church of León (Guanajuato) now the cathedral. The devotion soon became extremely popular, being promoted first by the Jesuits but then  spreading well beyond their circle. Confraternities in her honor was organized throughout Mexico.

The cult reached its peak in the 1750s and early 1760s. However, with the expulsion of the Jesuits in 1767, the cult lost its impetus among the elite, although popular devotion remained strong.