Moving east across northern Yucatan, the only abandoned early mission located within a Maya site to be rediscovered between Izamal and the east coast (of Quintana Roo,) is that at Xlacah/Temul, located near the town of Panabá, north of Tizimín, a major colonial mission town.

Xlacah and Temul are alternative names for the same place: initially, a still largely overgrown prehispanic Maya site with stone pyramids, known to researchers as Xlacah.

Later, a Spanish encomienda and brief colonial settlement called Temul was established here within the ancient site, with resident population that was later moved to nearby Panabá as part of the Franciscan congregation program.
Nevertheless, during this brief period, for about 20 years in the mid-1500s, a frontier style ramada mission of some size was erected among the Maya ruins upon a former temple platform.  The mission was enclosed by a square walled atrium (lower center)

The substantial colonial structure consisted of an elevated, arched open chapel with a flanking sacristy and baptistry, much of it constructed with cut stone from the Maya temple which it replaced.

The walls are pierced by doorways and recessed windows, which originally may have been part masonry and part timber, with a thatched roof overhead.

Additional masonry structures, possibly accommodation for the visiting friars, extended to the north of the chapel.

There are other abandoned colonial missions in the area, many of them the victims of pirate attacks, disease and depopulation as well as the 19th century Caste War which devastated eastern Yucatán.

Two other abandoned missions of note near Tizimín, closer to the north coast, are the churches of Kikil, and Loché, formerly an important prehispanic center of the Chikinchel Maya. 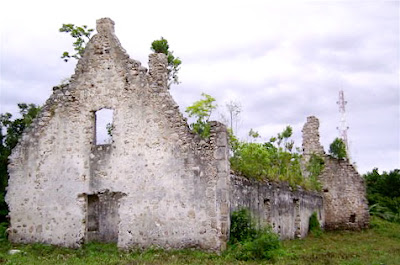 The existing ruined church exhibits more than one phase of construction, with the now largely collapsed open chapel with its vestigial belfry at the rear, fronted by a roofless masonry church with low nave walls. 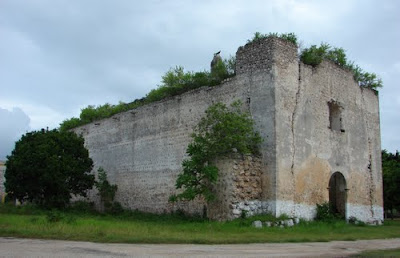 Like Loché, the abandoned church at Kikil is overgrown with vegetation and neglected, its facade riven by enormous cracks and the interior burned out.
Numerous other  "T-plan" mission churches, with formerly thatched masonry naves added to earlier open chapels, can be found all across Yucatan, many still in use and others—like Loché and Kikil— roofless and in ruins since the 19th century Caste War.
Details on many of these can be found in our guidebook Maya Missions, as well as the more extensive two volume illustrated guide The Colonial Churches of Yucatan by Christian Heck et al.
text © 2012 by Richard D. Perry.

Posted by Richard Perry at 3:21 PM