We continue our current series on Oaxacan churches by looking at another little known gem of early colonial architecture, the church of Santiago Nejapilla, located in the highland Mixteca Alta region. 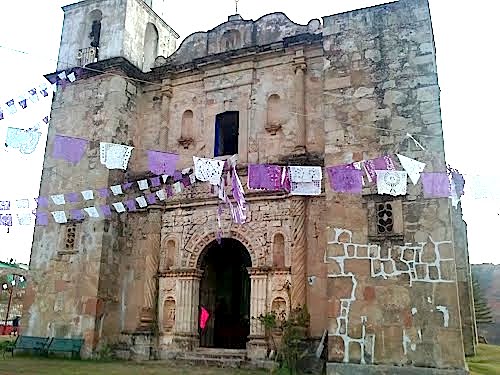 This remarkable church is cast in the characteristic mold of Dominican buildings throughout Oaxaca, and is notable for the richness of its sculpted west portal, framed in the form of a triumphal arch - a classical motif especially favored by the Dominicans.
Although one of the minor Dominican missions in Oaxaca— probably a visita of nearby Yanhuitlan since there seems to have been no convento attached—the substantial scale, quality of workmanship and richness of ornament at Santiago Nejapilla signify not only the importance that the Dominicans attached to even their lesser establishments but also the local pride so often demonstrated by the Indian congregations.
The Doorway
The grand main doorway is framed by powerful fluted jambs capped by dentilled capitals. A double coffered archway inset with cross-banded diamonds spans the doorway - another signature of regional Dominican architecture. Carved vines spring from urns on each side, arching above the doorway and spreading across the spandrels.
A vigorous relief of the Archangel Michael fills the keystone, with spread wings and cloak. Three enormous plumes rise from his helmet. This sculpture, dated 1696 by an inscription, may have replaced an earlier relief of St. James (Santiago,) the patron saint of the church.
As at nearby Tiltepec, Upper and lower shell niches with broad beaded frames flank the doorway. While the upper niches are plain, the lower pair is delicately carved with openwork doves in the inner arch, draped cross reliefs in the recess and projecting corbels or fonts at the foot. Intricate relief medallions featuring the Dominican cross separate the tiers of niches.

Above the doorway, running cornices - another common Dominican device - outline the entablature. Dentils and a twisted cord ornament the upper cornice and another vine snakes along the intervening frieze. Shell, anchor and cross reliefs appear over the keystone.
Fluted spiral columns flank the portal, extending through the entablature - one more Dominican feature - to the upper tier of the facade. This upper tier echoes the doorway level but is more austere, possibly a later addition. Its only sculptural ornament is in the surmounting frieze, which displays a row of winged, seated figures in flat relief.
The Exterior
Bold arched openings, many embellished with dentils and beading, punctuate the church: in the lateral porches, niches and nave windows. Assorted reliefs, floral, animal and figural, also adorn on the exterior. Deer, a jaguar, and a caped figure with the legend "Yo El Rey" (I the King) are carved into the wall of the apse. 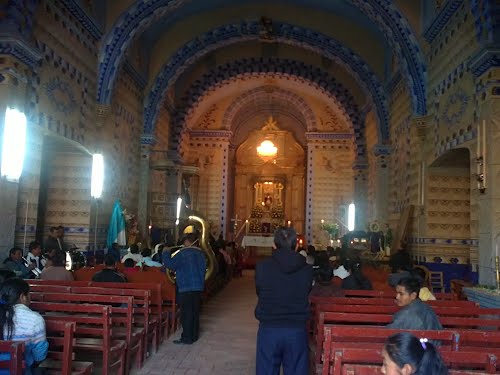 The Interior
Inside the church, five arches, enriched with carved and painted moldings and reliefs, separate the bays and support the long barrel vault. Again, figure sculptures embellish several keystones, notably a spirited Archangel Raphael and a relief of Christ, both colorfully painted and dated 1700. Together with the facade relief of St. Michael, these sculptures probably mark a major refurbishment of the earlier church.
Other typical Dominican architectural features include the ribbed wheel vault with its carved floral bosses supporting the choir, and the round coffered vault that spans the narrow sanctuary.
The painted baptistry houses a picturesque stone font carved with painted angel reliefs.
text © 2019 Richard D. Perry
color images © Carolyn Brown by special permission
Posted by Richard Perry at 11:54 AM