Here is another post on outlying colonial monuments of interest in Mexico.
Aside from some foundations in Baja California and Sonora, the Jesuits had a small footprint in Mexico at large. One exceptional cluster of Jesuit missions and associated Presidios is found in Nayarit state in western Mexico, a highland region known to the Order as San Jose de Toledo del Gran Nayar.
Initially consisting of a group of primitive pole and thatch structures, most of these early missions were expanded into masonry or adobe churches in the later 1700s, shortly before the expulsion of the Order in 1767, following which some were taken over and expanded by the Franciscans. 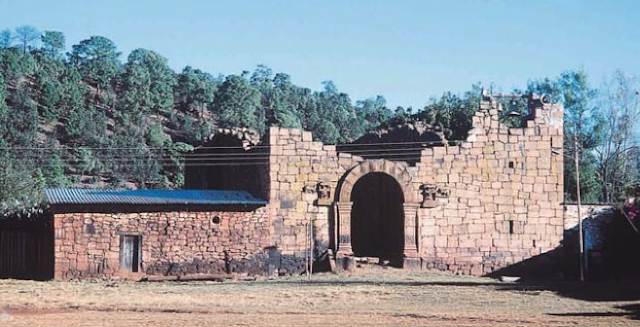 The mission of La Santisima Trinidad was the principal church and convento in the group, but our focus in this post is the unfinished, roofless church of Santa Teresa, notable for its sculpted stone front and stone main retablo.  The “reduction” was established in 1722, but the present ruined church was probably built in the 1760s, and later virtually rebuilt by the Franciscans from the 1770s. 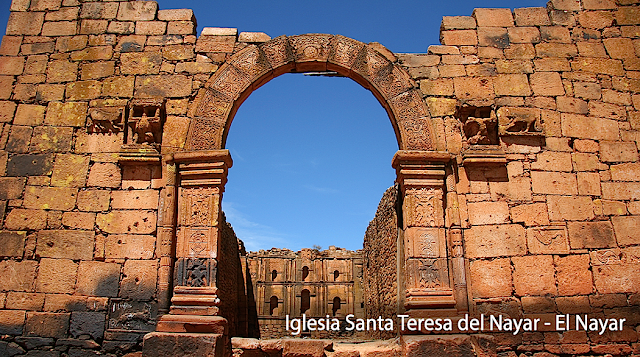 The Church
The church is still fronted by a large atrium or plaza which retains other colonial structures including the thatched Casa Real or community house of the area Cora Indians.
The facade is constructed entirely of stone blocks. The handsome main doorway is carved with various ornamental foliated motifs including crowned, two headed Hapsburg imperial eagles on the lower jambs. The doorway is closely flanked by decorative colonettes, while reliefs of pelicans? and felines are embedded or either side . 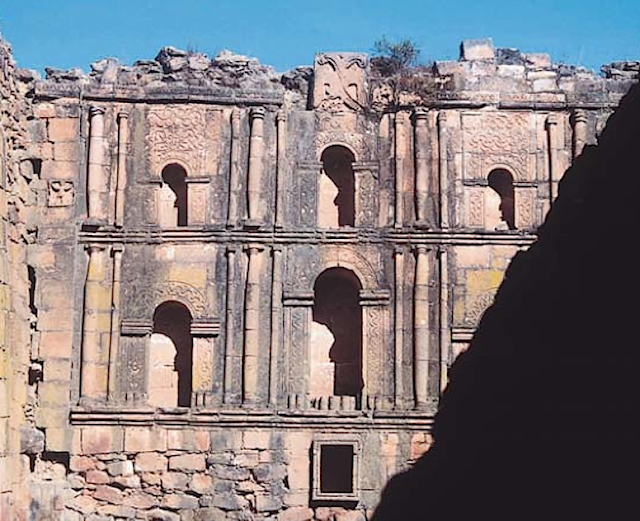 The Retablo.
One of the handful of known colonial stone retablos*, this altarpiece is divided into three sections in two tiers, each with ornately framed but now empty sculpture niches, divided by sequences of plain half columns.
Probably dating from the 1770s, it is an artifact of the Franciscan occupation of the mission. The upper tiers are capped in part by knotted cord moldings—a classic Franciscan signature. 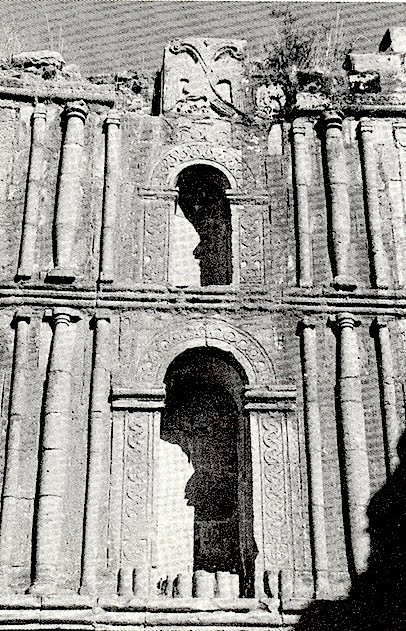 Like the facade the retablo is carved with ornamental reliefs including another prominent two headed eagle, this time without a crown but posed on a cactus with a serpent in each mouth—a reference to the Aztec and now Mexican national symbol.  Two similar smaller reliefs appeared on either side along with the Jerusalem cross—another Franciscan symbol.  Some of the original statues of saints are reputed to remain in the nearby parish church.

* Other late colonial stone retablos in Mexico include those in the cathedrals of Puebla (Los Reyes) and Chihuahua, The Santuario de Guadalupe in Aguascalientes, San Jose Chiapa, El Carmen in San Luis Potosí, San Pablo El Viejo in Mexico City and Huentitán near Guadalajara.

Posted by Richard Perry at 3:31 PM