In this post we turn to one of greatest and most celebrated of early colonial altarpieces in Mexico, the retablo mayor of the church of San Bernardino de Xochimilco in southern Mexico City.  Here we rely upon vintage images of the retablo taken by the author in 1987 soon after its initial restoration.*
Fray Martín de Valencia, the visionary leader of the Franciscan Twelve, founded the mission here in 1525, dedicating it to Bernardino of Siena, the popular 15th century preacher and reformer.  By 1580 much of the present monastery was built—a tribute to the skill and dedication of Xochimilco's famous artisans. 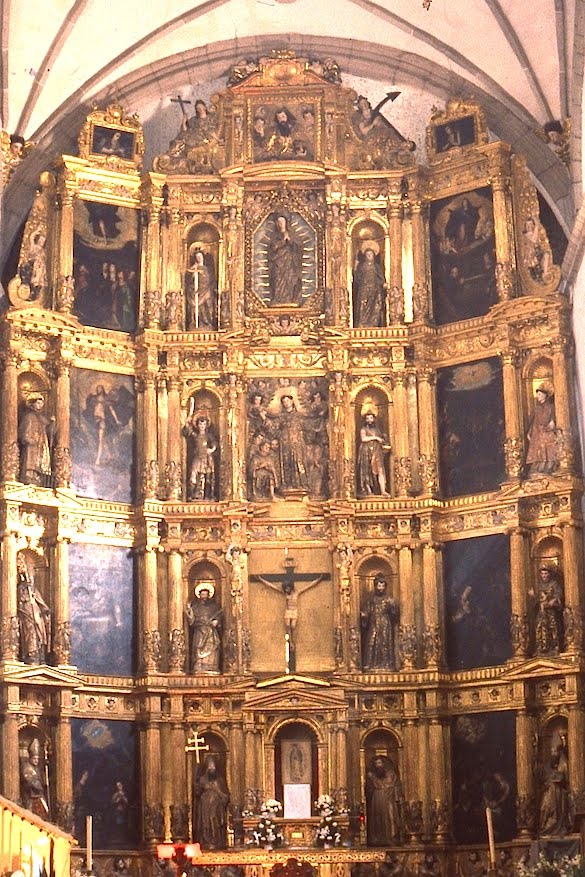 El Retablo Mayor
Although the church houses a choice collection of colonial art and artifacts, the undisputed masterpiece is the main retablo behind the high altar. Largely restored, this altarpiece was probably created in the final years of the 16th century and is considered the crowning achievement of late Renaissance altarpiece design in the Americas.

Drawing on the talents of the finest artists and craftsmen of the day, it is a stunning synthesis of painting, carving and gilding, The elegant frame, richly carved and lavishly gilded, rises in four main tiers towards the vault of the apse. Fluted columns, delicately ornamented with saints and friars, support classical capitals, cornices and pediments—all finished in refined detail. 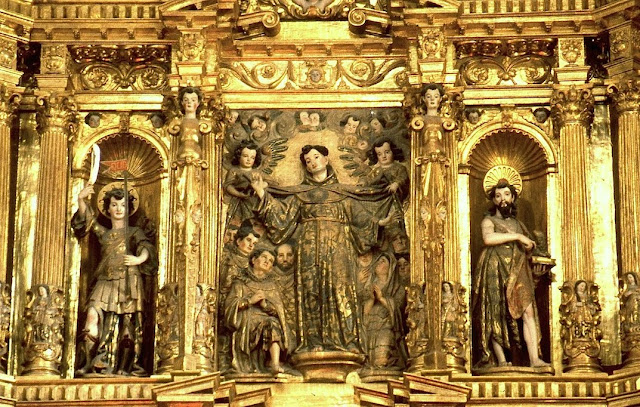 Paintings and sculpted figures alternate in the seven vertical columns, or calles. In the center calle, framed by Atlantean pilasters, the main relief depicts San Bernardino protecting several figures of both sexes beneath his ample cloak. These are believed to represent three native nobles* and their wives from the Xochimilco area, including some who may have sponsored the altarpiece. 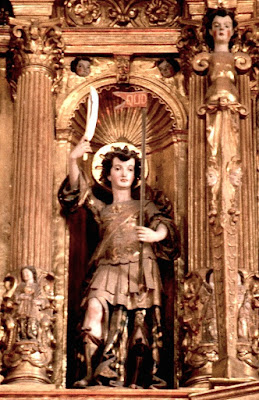 Two exceptional figures stand beside San Bernardino. John the Baptist, on the right, is an expressive figure of extraordinary power and beauty, while the virile Archangel Michael, on the left, seems poised to stride forth from his niche to defeat the forces of darkness. Both images possess a dynamism of movement and gesture that breaks free of the restrictive mold of the other figures, heralding the exuberance of the baroque era. 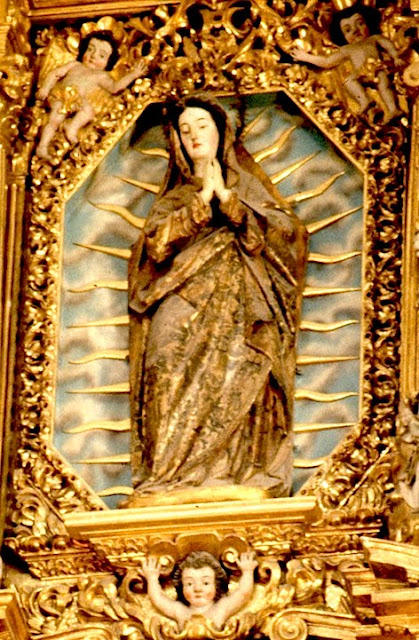 Above him stands the image of the Virgin Mary, resplendent in opulently textured estofado drapery. (Estofado was a technique of imitating cloth on statuary by incising surface paint to reveal the gilding underneath, a method perfected by colonial sculptors in Mexico.) 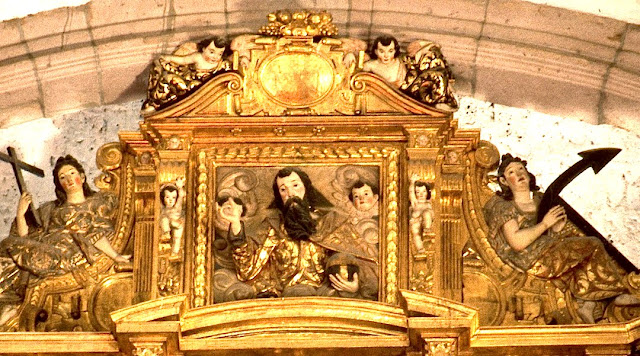 God the Father, youthful and bearded, gestures from the pediment at the top of the retablo, flanked by the reclining statues of Faith and Hope. Hope clutches a huge anchor, looking for all the world like a ship's figurehead. 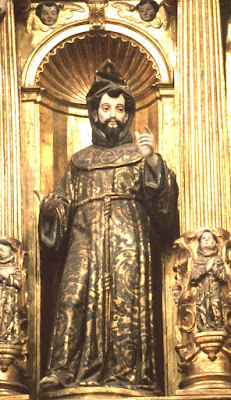 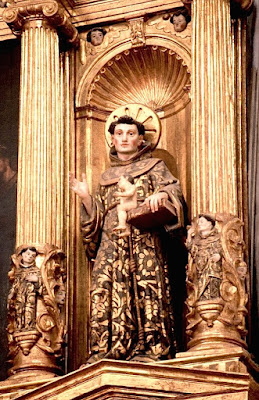 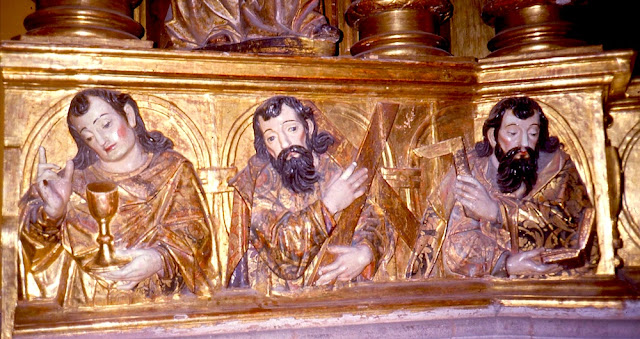 Relief busts of homely Apostles fill the predella, or base panel of the altarpiece. Clutching the tools of their trade, these are clearly portraits of working men, perhaps even of the artisans who crafted the retablo.
Eight large paintings depict familiar episodes in the lives of Christ and the Virgin Mary, from the Annunciation and the Nativity on the first tier to the Ascension of Christ and the Assumption of the Virgin in the top tier.
They are attributed to Baltasar de Echave Orio, a Basque artist who came to Mexico in the 1580s. A pioneer of the Mexican school, he founded one of the most successful and long-lived painting dynasties in the New World.
These panels are his only known complete cycle of paintings to survive in Mexico—all the more remarkable for having remained intact in their original location. They follow the prevailing Italian Mannerist style of the period.
In spite of the eccentric composition of some panels and the occasionally uncertain draftsmanship, the figures are sedate and aristocratic. Their serene, almost doll-like features are suffused with light, emphasizing their spirituality,just as their sumptuous draperies underscore their worldly dignity.
Echave Orio was a master colorist, and the paintings are alive with rich warm tones accented with vivid greens and lilacs.
* Martín Cerón de Alvarado, Joaquín de Santa María y Francisco de Guzmán.
* The paintings were cleaned and further restored in early 2016