In a previous posts we looked at the famous open chapel of Tlalmanalco and its less well known but also unique baptismal font. In this post we focus on the main altarpiece of the church, a beautifully wrought example of the genre in classic baroque style. 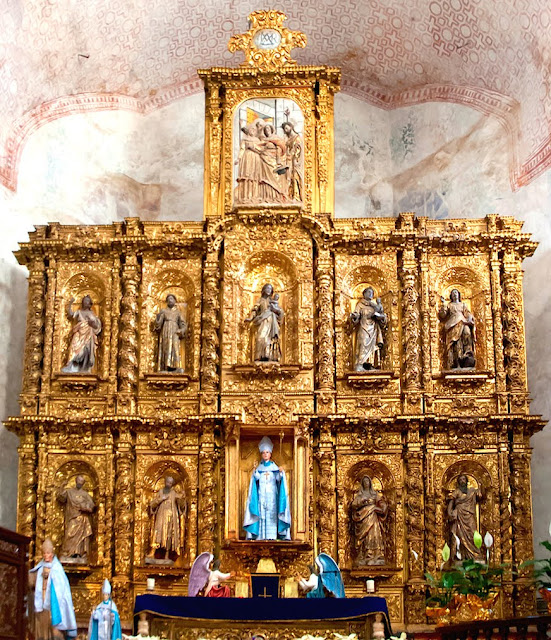 Originally designed as a side retablo, the altarpiece of the Virgin now stands behind the main altar. Its luxuriantly carved and gilded framework is a superb example of the ornate "solomonic" style of the late 17th century and early 18th century baroque.
Complex spiral columns, wreathed with the tendrils of curling vines, frame the two broad tiers of sculpture niches. The columns are headed by classic Ionic capitals. Every surface is alive with scrollwork and spiraling foliage. 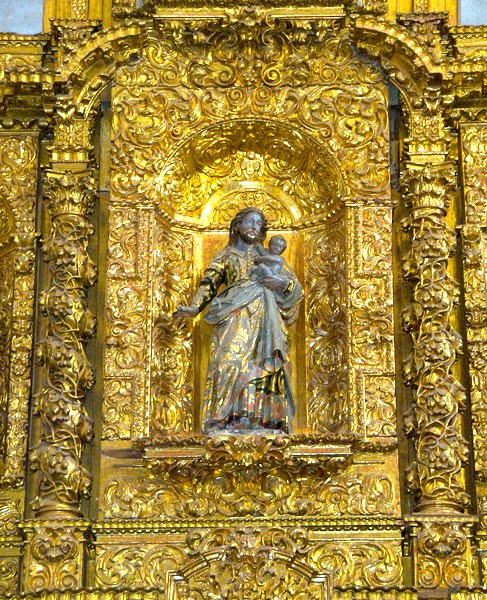 St. Joseph
On the upper tier, St. Joseph occupied the place of honor in the sumptuous center niche, flanked by the Franciscans St. Francis and St. Anthony of Padua in the inner calles, with John the Baptist and John the Evangelist in the outer niches.

Below, saints Peter and Paul occupy the outer niches of the lower tier, beside the sumptuously robed Saints Joachim and Anna, the parents of the Virgin Mary, in the inner spaces. 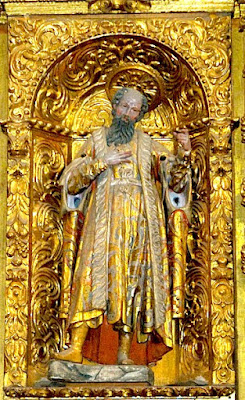 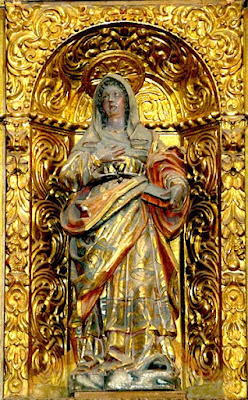 Joachim and Anna
These flank the patron St. Nicholas of Toulouse—a modern image of poor quality, in a later installed center vitrine. The original niche, no doubt similar to that housing St. Joseph overhead, once held an image of the Virgin Mary, to whom the altarpiece was originally dedicated) An intimate relief tableau of the Visitation in the top tier—possibly a later addition—shows Mary and Elizabeth both with child—greeting each other against an angular architectural background. A youthful Joseph looks on and the pilgrim's hat dangling from Mary's hand is a nice popular touch.
Although not securely documented, the prominent 17th century mestizo sculptor and retablista Tomás Xuárez may have been the author of the statuary, the relief, and possibly the altarpiece itself.