Jalisco. The Stones of Huentitán

As we have seen in this series, the small towns and city barrios around Guadalajara afford an enormous variety of intriguing art and architecture for the aficionado of colonial and religious art to explore.  Most of these monuments are noted for the beauty of their building stone and the high quality of stone carving.
One example of this craftsmanship is the little 18th century temple of Huentitán Bajo, in the northeastern suburbs of Guadalajara, close to the rugged and scenic Barranca de Huentitán. Formerly an independent village, the community has now been virtually absorbed by the rapidly expanding boundaries of the city.
Huentitán is traditionally renowned for its skilled stonemasons. It is also a prime historic source for attractive quarrystone - cantera dorada - a fine grained, honey-colored, oolitic limestone which, being soft and easily worked, was preferred for many of Guadalajara's finest buildings. 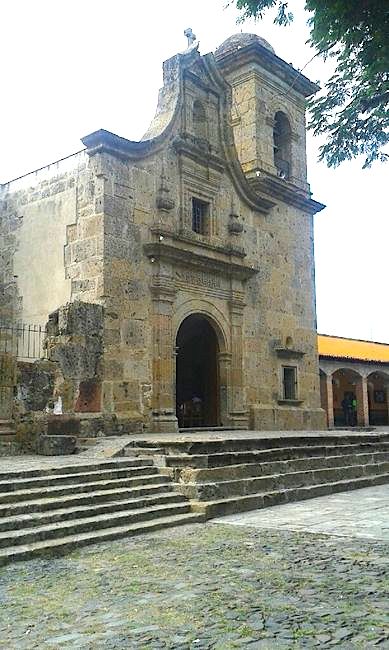 This same quality of stoneworking is seen at its best in the local church of the Ascension. The 18th century building, dated 1734 by an inscription, was built over a 16th century Franciscan hospital chapel, linked to San Francisco in Guadalajara. 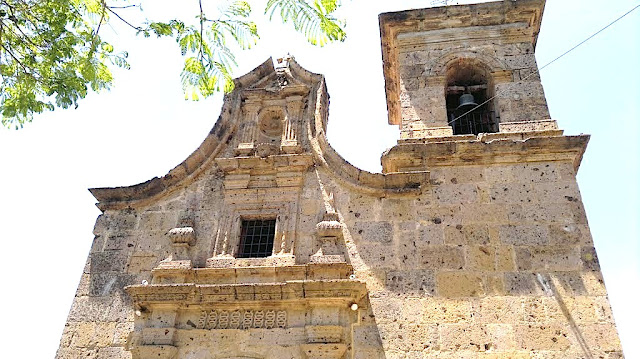 Its sober baroque front stands above a broad span of stone steps and, in typical regional style, is emphatically outlined by its grand portal, prominent cornices and soaring gable. The atrium is a former cemetery where a simple stone cross still stands. 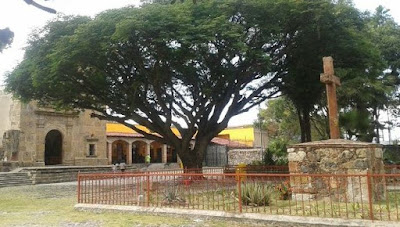 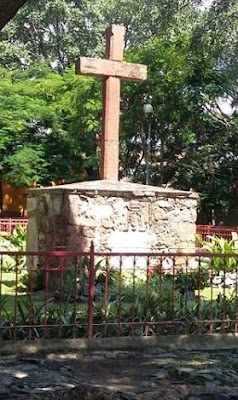 Virtuoso stone carving is evident throughout the building, But the sculptural piece de resistance is its exuberant main altar, recessed in a stylish narrow apse and framed by columns set in undulating drum cornices. 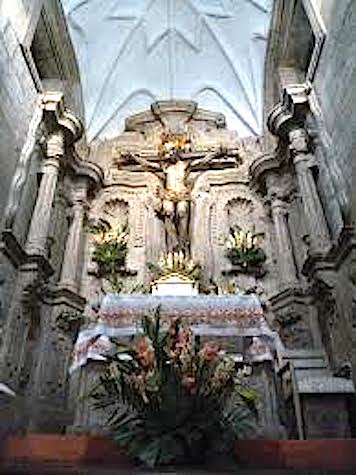 Mounted on the altar is a life size 17th century crucifix - the Ascended Christ (Nuestro Señor de la Ascensión) to whom the temple is dedicated. The graphically depicted figure, carved from hard mesquite wood, is set against an undulating cruciform stone frame in ornate rococo style. 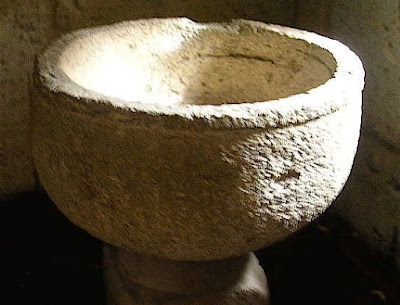 Two other stone retablos, dedicated to St. Joseph and John the Baptist, stand along the nave. There is also a plain, monolithic baptismal font. 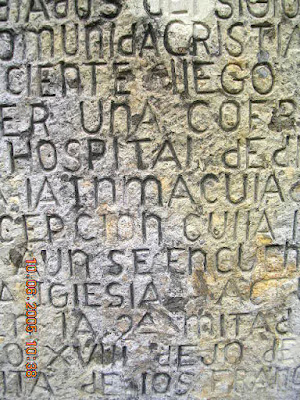 Another remarkable carved stone monument at Huentitán is the tall commemorative column or stele, erected in front of the adjacent casa cural. Incised with a large cross, it is densely carved with historic information on the church, including several dates.


color images courtesy of the late Edward Fesler and from online sources.
visit our earlier posts on the other Cajititlan churches: and Jalisco crosses
Huentitan is also noted as the birthplace of celebrated singer Vicente "chente" Rodriguez.
Posted by Richard Perry at 11:39 AM