We resume our survey of the early Missions of Michoacán with a follow up to our earlier post on the historic mission at Santiago Angahuan. We now look at the little hospital chapel there, with new pictures and details.
An integral part of every new mission, or pueblo-hospital, in western Michoacán was the guatápera compound, a traditional space for the use of the native purépecha people.
At Angahuan the compound is located across road from the church on the north side of the atrium, and is now, appropriately, a vocational school for young indigenous women. 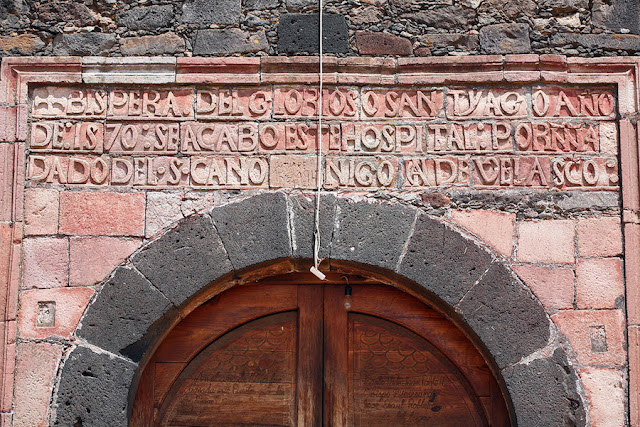 An essential component of the guatápera was its hospital chapel, commonly dedicated to the Virgin Mary. At Angahuan the chapel anchors the southwest corner of the gated compound, an austere building cut from volcanic stone with a tiled, gabled roof and a cylindrical stone cross in front.
Of special interest here is the Spanish legend expertly carved within the alfiz above the doorway. This dates its construction to the year 1570 and names as its benefactor Juan de Velasco, a canon of the cathedral at Patzcuaro. Velasco was a prominent priest attached to the cathedral who served in several parishes under Bishop Vasco de Quiroga, who was the moving force behind the founding of pueblo-hospitals in the 16th century.
To our knowledge this dated inscription is unique among early hospitals in Michoacan:
ON THE EVE OF GLORIOUS SANTIAGO
IN THE YEAR OF 1570 THIS HOSPITAL WAS COMPLETED


BY ORDER OF THE CANON JUAN DE VELASCO

In 1986 a new wooden door for the chapel was carved by the late Simón Lázaro Jiménez, a local carpenter, storyteller and purépecha village elder, who also sculpted an intriguing house doorway across the main plaza graphically illustrating the 1943 eruption of the volcano Paricutín.
He also wrote an anecdotal account of that momentous event, which he witnessed as a child. 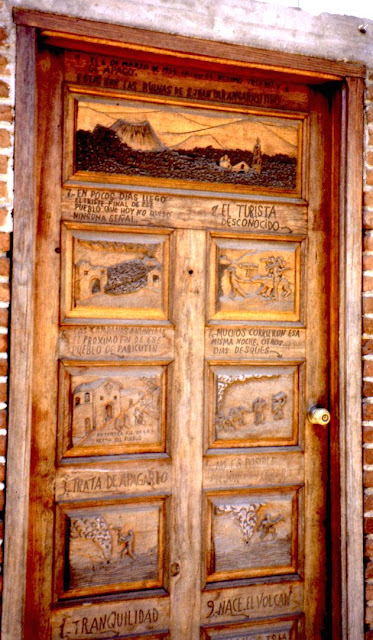 See our posts on the painted chapels of Michoacán: San Lorenzo; Zacan; Nurio;