Chiapas: Place of the Grasshoppers

For our last two posts on lesser known Chiapas missions we move to the northern Zoque region of the state.

Chapultenango "Place of the Grasshoppers" was one of a network of mission towns established by the Dominicans among the Zoque Indians, who populated the fertile tropical lowlands of northeastern Chiapas. Founded in the 1590s, this substantial mission was largely built in the 17th century, with some later additions. 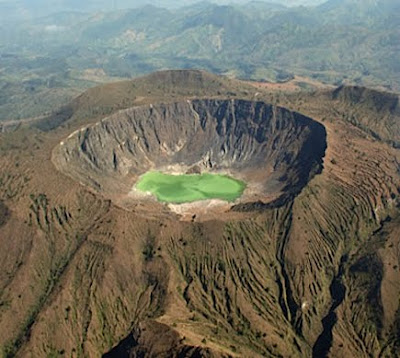 In 1982 the nearby volcano of El Chichonál erupted violently, bringing devastation to the surrounding area. The rain of volcanic ash and rocks damaged several of the old Dominican mission buildings in the Zoque region, including Chapultenango and Ostuacán, and completely destroyed the historic nearby church at Francisco León.

The Church
The massive church, constructed of brick and stone, survived the holocaust and has been partly restored. It bears a strong family resemblance to the other churches of the region, notably those at Copainalá and the Dominican priory at Tecpatán.

The facade is distinguished by an elegant classical arched doorway cut from smooth white limestone surrounded by a variety of now empty niches. Above the dividing cornice is a small choir window framed by narrow baluster columns. Another pair of baluster columns hangs below the cornice—a classic marker of Dominican architecture in Mexico. 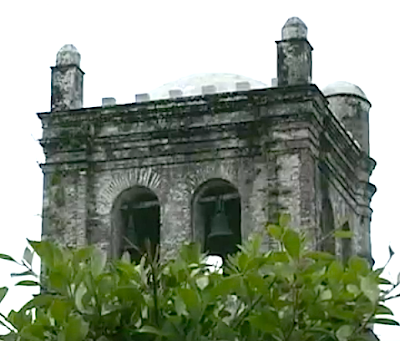 The outstanding feature of the front is a substantial bell tower that projects from the south side of the facade. Punctuated with numerous window slits and arched bell openings, the tower is capped with great corner pinnacles.
A domed, cylindrical caracol stairway is attached to the northwest corner—another regional feature also seen at Tecpatan and Copainalá, and even attached to the celebrated fountain at Chiapa de Corzo. 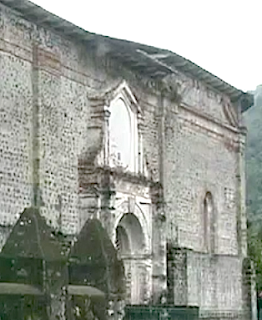 The baroque north entry, which boasts a large oval medallion, is an 18th century addition,  although the fine arched windows along the nave, with their continuous stepped frames, are typical of Dominican architecture in Chiapas and Oaxaca.
The nave, now covered by a flat metal roof, was formerly pitched, and at one time thatched with palm leaves—the main victim of Chichonal's fury. However, the grand polygonal apse retains its original covering, a handsome, paneled half-dome sheltering a popular image of El Señor de Esquipulas, the patron saint of the community. 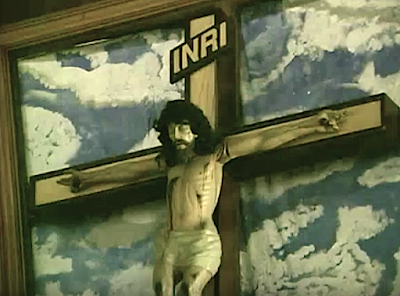 Of special interest is the restored sacristy, also roofed by a coffered dome boldly painted with the sun, moon, stars and the Instruments of Christ’s Passion in blue and white. 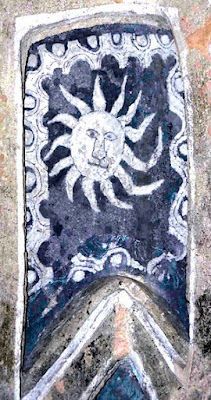 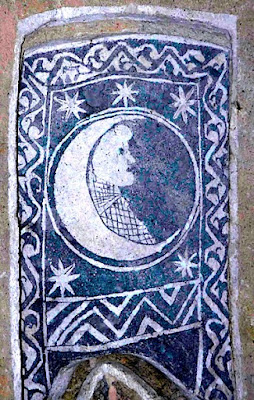 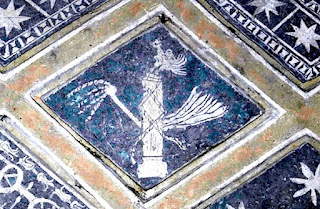 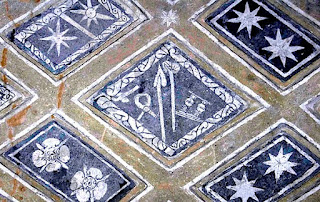 The Convento
Although largely destroyed by the eruption, since 2001 much of the two-story convento and the mission garden have been rebuilt for use as a community center.

for more on colonial Chiapas consult our guidebook
Posted by Richard Perry at 5:41 PM