Chiapas: The Saints of Teopisca

For our third post on the colonial retablos of Chiapas, we look at the magnificent main altarpiece at Teopisca. 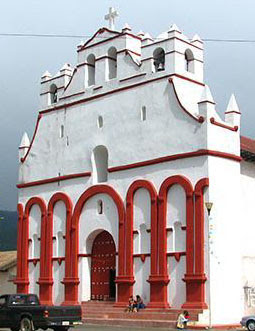 Built on the site of an ancient Maya shrine and necropolis, the spacious nave was even used for Christian burials in colonial times.

The Main Retablo
The principal altarpiece is one of the largest, most refined and most lavishly ornamented colonial works of art in Chiapas, as well among the earliest, probably completed in the first decade of the 1700s. During a 1993 re-roofing of the church, the retablo was disassembled and removed for cleaning and restoration. Today it occupies a place of honor in the sanctuary of the church.
It has an interesting history. Originally created for the former Jesuit church of San Agustín in the city of San Cristóbal, it was moved here in the 1880s apparently to replace retablos destroyed during an earthquake. (two other retablos from San Agustín are preserved in the city Cathedral) 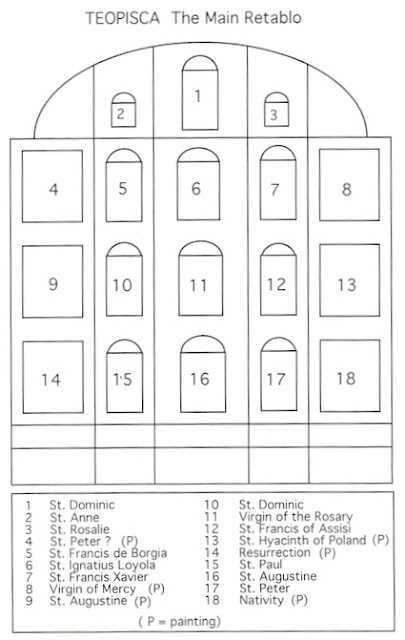 This opulent retablo is a triumph of the Central American "Solomonic" style, similar examples of which can be seen throughout Guatemala and Oaxaca.
Its four main tiers are framed by encrusted spiral columns, intricately carved with twisting grapevines and sharply projecting cornices many hung with spindles—a distinctive feature of this southern style. Numerous carved angels and atlantes as well as a dizzying overlay of filigree ornament further enrich its gilded surfaces. 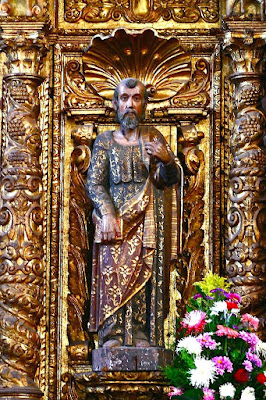 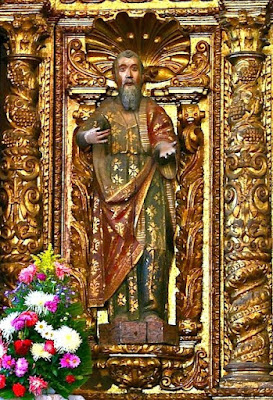 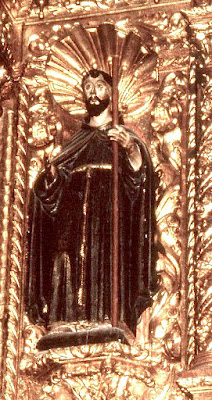 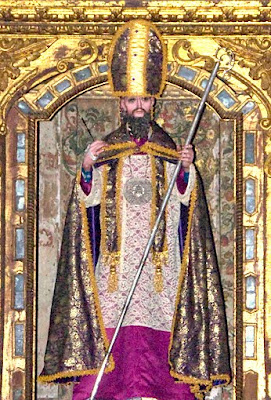 St.  Francis                St Augustine
In addition to traditional icons like the Virgin of the Rosary,* St. Peter and St. Paul, there are portraits of the founders of the religious Orders: St. Francis, St. Dominic and naturally, St. Augustine—the patron saint of the church.
Jesuit notables such as Ignatius Loyola, Francis de Borgia and Francis Xavier are also represented on the third tier, reflecting the original sponsorship of the altarpiece. 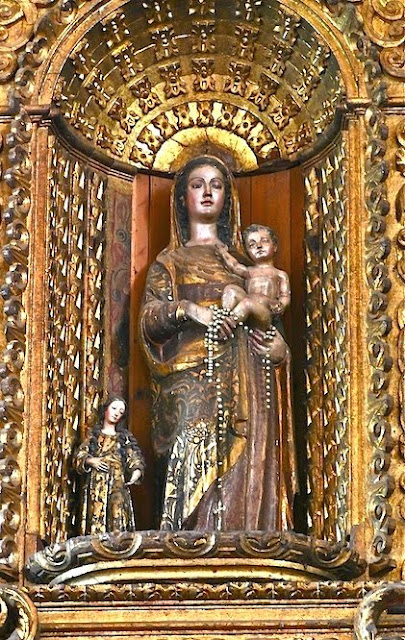 * Although dressed in modern costume, the statue of the Virgin of the Rosary and Child is unusual and appears quite old. It may be an import from Guatemala or even Spain.
In the outer compartments, large, rectangular paintings of individual saints occupy the upper tiers. On the lower tier are two quite distinctive narrative paintings. They portray on the right, a Nativity, or Adoration of the Shepherds, and on the left, the Resurrection.

In this unusual representation Mary Magdalene, accompanied by the mother of St. James, confront in amazement the empty tomb of Christ. An angel pronounces the Latin words, Surrexit, non est hic: "He is not here, he is risen."
Although we have no secure documentation, it seems likely that these two panels, may be the remnants of a cycle by the celebrated Mexican baroque artist Juan Correa the Younger, who created the paintings for the related retablo of El Perdón in the cathedral.
In our view, this magnificent altarpiece is the finest in Chiapas and ranks among the outstanding examples of its kind in Mexico.
text & graphics © 2006 & 2017 Richard D. Perry
color images by the author and courtesy of Robert Guess and Niccolo Brooker. All rights reserved.

for more on colonial Chiapas consult our guidebook
Posted by Richard Perry at 8:49 AM