Over the centuries colonial artifacts and art works have been subject to more or less violent changes, often with dire consequences. This is especially true of altarpieces, which have been moved, mutilated and reassembled, often from disparate sources and varying time periods.
One example is the superb 18th century altarpiece of San José in the Cathedral of San Cristóbal de Las Casas, in Chiapas.
(This post is expanded from a page that appeared on our web site, and is the first in a series exploring colonial Chiapas.)
Among its many treasures, the cathedral of San Cristóbal is the possessor of several fine colonial altarpieces. In addition to the elegant Churrigueresque main altarpiece, two especially beautiful gilded retablos stand beside it, facing the two side aisles.
Believed to have been originally crafted in the early 1700s by a team of Guatemalan artists and artisans for the former Jesuit church, now the church of St. Augustine, in San Cristóbal, the retablos were probably moved to the Cathedral following the expulsion of the Jesuits after 1767. (A third altarpiece, the retablo mayor, is to be found in the church of San Sebastián in nearby Teopisca.) 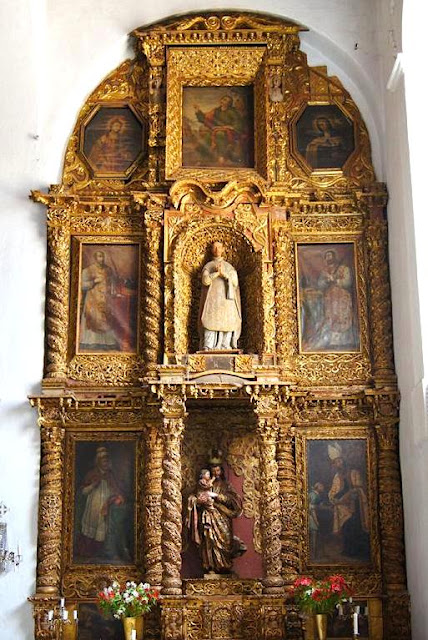 The retablo of San José, facing the south aisle, is the finer of the two, designed in a highly ornate style typical of 18th century southern Mexico and Oaxaca.
Partitioned by spiral Corinthian columns, wreathed with gilded vines, and thin, projecting cornices hung with spindles, the paintings and sculpture niches are densely ornamented with gilded strapwork and scrolled arabesques, representing one of the most beautiful examples of the genre extant. 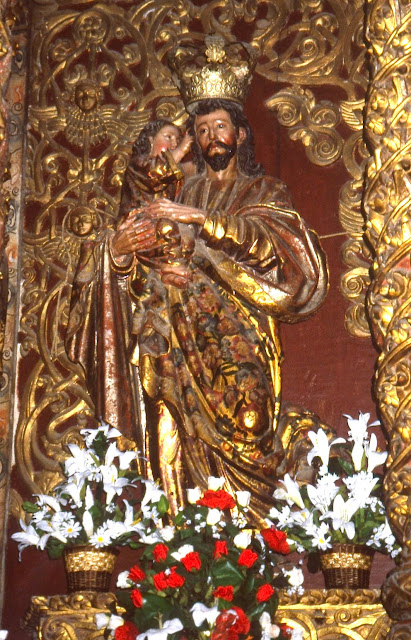 Statues of saints, notably the crowned figure of St. Joseph in the lower niche, crafted in the Guatemalan style and enfolded in an exquisite estofado robe, are surrounded by paintings portraying richly costumed saints and bishops. 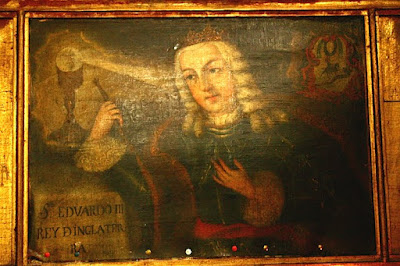 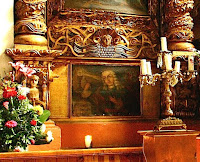 King Edward
The Royal Portraits
But our main interest here is the two smaller portraits of saints along the base of the retablo. These show respectively, King Wenceslas of Bohemia on the right, and on the left Edward the Confessor, the 11th century English king (see note below) 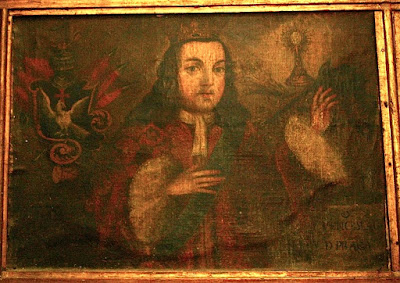 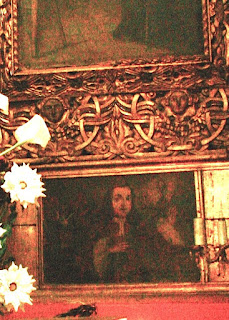 King Wenceslas
Together with two other inscribed companion portraits, of the more commonly portrayed royal saints Ferdinand lll of Castile and Louis lX of France, which are now mounted in the base of the adjacent main retablo, the four paintings are similiar in size and style, and appear to be from the same workshop. 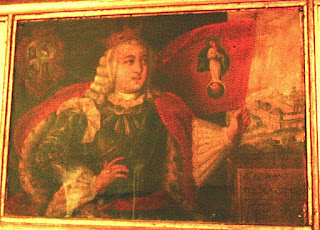 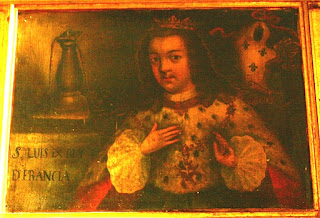 Ferdinand III  &  Louis IX
While none are signed or dated, because of their style and details of the period dress there is reason to believe that they were painted before the mid-1600s.
In fact one, or more likely, all of the portraits may have been commissioned by the English Dominican Thomas Gage,* who is known to have visited San Cristóbal in 1626 and sojourned in other parts of Chiapas and Guatemala during his controversial career as a priest in central America.
Although their original provenance is unknown, they might have hung in the Dominican monastery of Santo Domingo here in San Cristóbal—possibly as part of a now lost earlier altarpiece—and thus may predate the altarpieces in which they are now placed.
King Edward
It should be pointed out that the portrait in question is actually a conflation, or better said, confusion of two kings, by the artist. St. Edward the Confessor is labeled as Edward lll, the Plantagenet king, hero of Crécy and father of the Black Prince. It was this Edward (1327-1377) who won fame as a warrior, not as a saint, and instituted the Order of the Garter, which is shown in the portrait on the right, with St. George slaying the dragon.
However, another attribute depicted, the Host with Crucifixion on the left, clearly refers to the Miracle of the Mass, which is associated with St. Edward, who was known as King Edward lll under the Saxons—the renumeration of English kings after the Norman conquest may have led to the confusion.

Yet another anomaly is the depiction of the lion and unicorn flanking the Garter (not too clear in the picture), insignia that only appear together (the lion of England and the unicorn of Scotland) after the United Kingdom of Great Britain was established in 1607.
As the English Mayanist Eric Thompson* has pointed out in his commentary, Edward the Confessor, the patron saint of persecuted English Catholics in exile and thus dear to Thomas Gage, would have been virtually unknown in the Americas at that time, and certainly one of the least likely royal saints to be portrayed.
While Wenceslas is also rarely shown in Mexico or Guatemala, to our knowledge this colonial portrait of an English King is, apart from a statue in the main altarpiece of Puebla Cathedral, unique in the Americas.


Many thanks to Bob and Ginny Guess for their painstaking work and persistence in obtaining the color images on this page.

for more on colonial Chiapas consult our guidebook
Posted by Richard Perry at 10:53 PM