After the mid-1700s, the influential Pueblan baroque was in turn influenced by newer fashions, notably the Mexican Churrigueresque or barroco estípite style, which spread from Mexico City to the silver cities of the north, and south to the colonial cultural capital of Puebla. Strongly influenced by the stucco facade of La Compañía (date) in the city of Puebla, in the late 1700s this new style reached its popular apogee in a handful of other rural churches such as Acatzingo, Aljojuca and San Pablo de las Tunas in the central part of the state. 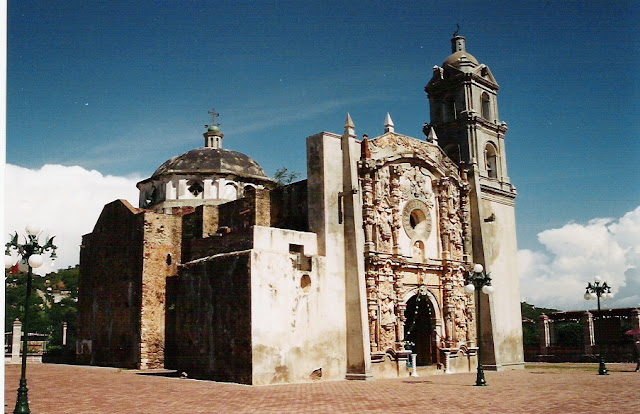 However, the distant plain of southern Puebla, known regionally as la mixteca poblana, seems an unlikely place to find this decorative example of the late Pueblan baroque. Although the parish church of San Pedro Tecomatlán dates back to 1500s, it was substantially rebuilt in the latter years of the 18th century, and fitted with an elaborate facade in the still fashionable Mexican Churrigueresque style. 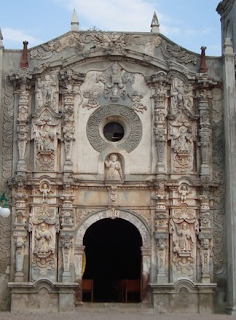 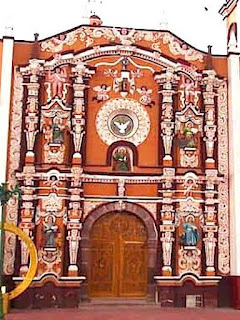 San Pedro Tecomatlan facade before and after recent restoration
The Facade
Although the architect and source of funding for this ornate church front is so far unknown, the facade is remarkable for its profusion of statuary and relief ornament in a popular folk idiom. The decorative center facade is framed by its two pairs of elaborate estípites, decorated with herms and grotesque masks. Prominent niche-pilasters (interestípites) in carved stone and modeled stucco feature the statues of the Four Evangelists, housed in swagged niches complete with their associated symbols, and quill pens held aloft. 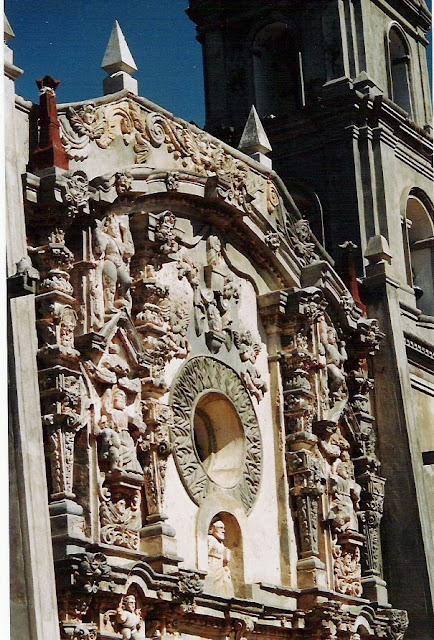 A naive, frontal figure of St. Peter (San Pedro) rests in a plain niche over the doorway. Above the "bulls-eye" choir window, a group of flying angels in 16th century style surround a curtained upper niche which contains another small statue. A pair of large, naked atlantes support the crowning gable. Every element is densely ornamented with delirious swirls of vegetation & scrollwork.
Unfortunately, some of these figures have been mutilated in recent years, notably St. Matthew's faceless angel. and St. Mark's now headless lion.