Several gilded altarpieces line the nave on either side, the majority unrestored.  Most date from the later 1700s.  One that has been recently restored is that of El Rosario on the north side.

Dated 1788 it is framed in classic Oaxacan baroque style with helical columns and pilasters densely carved with entwined foliage, and projecting cornices hung with spindles. Passages of foliated gold relief fill the intervening spaces.
Apart from the two fine statues of San José and The Virgin of the Rosary in the center niches, the remaining images are all paintings, dedicated to episodes in the life of the Virgin.

Among the other retablos, that of San Miguel stands out with its original bescrolled caryatid supports. 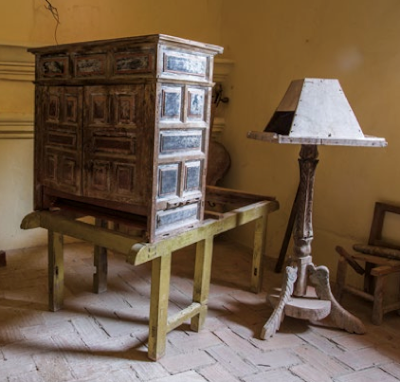 Another colonial artifact inside the church is the 18th century table organ case, a reminder of the importance of music at Soyaltepec and throughout Oaxaca in colonial times.

Posted by Richard Perry at 4:52 PM