This sixteenth century visita of Huichapan, notable for its ornamental bell tower, also boasts a variety of carved stone crosses. 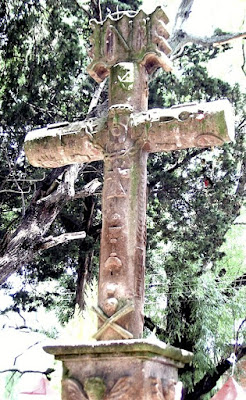 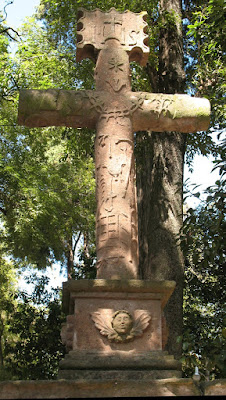 Atlán, the atrium cross:  front and reverse.
The Atrium Cross
Sculpted from fine grained, honey colored stone, the cylindrical cross is set on a sculpted pedestal carved with cherubs’ heads like those at Huichapan. The pedestal in turn is raised atop a large polygonal base, probably hollow, with a small arched opening. 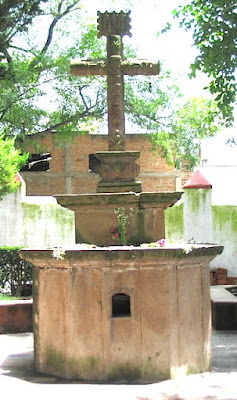 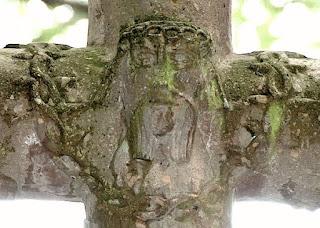 The tall cross is finely carved in the round with a full panoply of Passion symbols including sun, moon and stars rendered in crisp relief.
On the front a spiked collar of a Crown of Thorns is loosely draped around the crossing, framing the bearded Face of Christ with a second Crown on his brow. The draped Crown continues on the reverse side, but with no face, although triple Nails and a rosette adorn the neck. 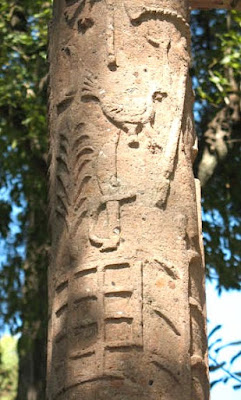 Numerous Passion objects are dispersed in high relief along the shaft. A Chalice with the Host takes pride of place with a Skull and Bones at the foot. Dice and the Pieces of Silver form a line down one side and the Rooster appears without an accompanying Column. A corn plant strikes an indigenous note.
As with other area crosses, a large, scalloped INRI cartouche heads the cross, while the Christic acronym IHS is carved on the back of the crowning cartouche. There are no finials. 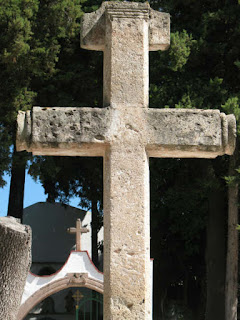 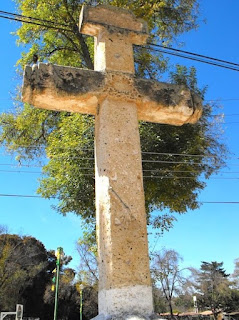 The Gateway Cross
A second, plainer cross stands on the sidewalk, raised on a pedestal just outside the atrium wall in front of the western gateway. Now somewhat eroded, the cross is square in section with beveled corners. 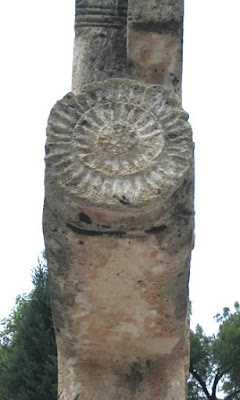 As with the atrium cross, it features a wreath like Crown at the crossing together with traces of other Passion reliefs on the arms and shaft. Unlike the atrium cross, the arms of the gateway cross have carved finials in the form of complex rosettes. 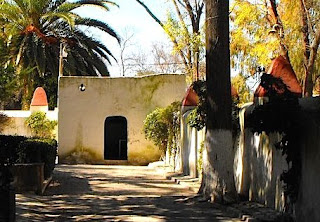 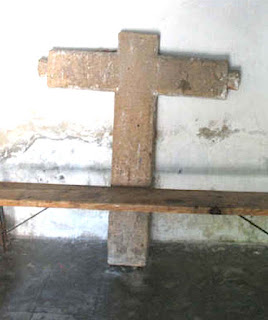