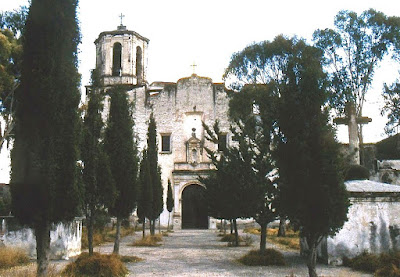 Known as Villa Tezontepec to distinguish it from Santiago Tezontepec in western Hidalgo, the old convento of San Pedro just across the state line from Mexico State, is primarily distinguished by its superb 16th century murals. However, Tezontepec also boasts several stone crosses, although not from this early period. 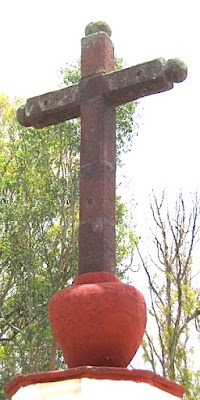 The Atrium Crosses
A pair of plain, squared redstone crosses stands to either side of the atrium, one set on a globe and the other on a vase like pedestal. 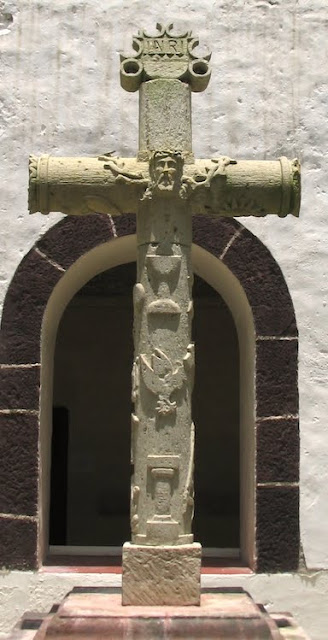 The Cloister Cross
But of more interest from our perspective is the cloister cross.
Although from all appearances post colonial in date and partly reassembled, the cylindrical style cross boasts a broad range of bold but flatly carved Passion objects generously spaced around the shaft including several Hands, an upended water Jug and a Cockerel aloft above the Column. 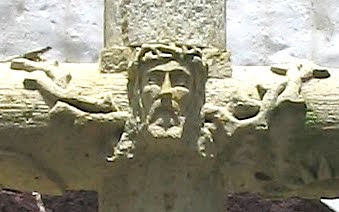 By contrast, the finely modeled Face of Christ at the crossing is framed by a soft, necklace style Crown draped along the arms and around the now plain neck of the cross.
Large sun and moon reliefs project beneath the arms, which are capped by flared, zigzag finials. A damaged INRI plaque atop the cross features ornamental scrolls in the regional manner.