Jalapa del Marqués: above the waves

Some years ago, for one of our posts on the “drowned “ churches of Mexico, we ran a story on Jalapa del Marqués, in Oaxaca, whose 16th century Dominican mission of La Asunción was inundated by the dammed lake of Presa Juarez.

As with the related church at Santiago Quechula, another drowned Dominican mission in adjacent Chiapas, during periods of extreme drought, lake levels fall dramatically and the buildings re emerge from the waters.

Such is currently (February 2017) the case with the Jalapa monastery, which has been re exposed for the first time since the 1960s. This allows a closer view of its architectural and ornamental details, long obscured beneath the lake.

Much of the convento remains, most of it still roofed including the open chapel in front, although mud and silt levels remain high.
The sturdy buttresses supporting the nave also still stand, although sections of the church fabric including the domes and facade are badly cracked. 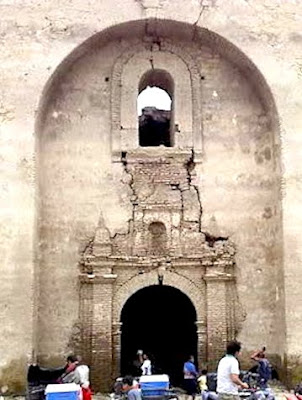 Before the inundation in the 1960s, attempts were made to document and preserve some of the murals in the convento. We review these on our sister blog.
The present situation offers the opportunity for closer study of the newly emerged church and convento by the appropriate authorities before the waters rise again.
text © 2017 by Richard D. Perry.  selected internet images
Posted by Richard Perry at 1:46 PM