The stone fonts of Puebla: Acatzingo

In previous posts we looked at stone baptismal fonts and carved holy water basins in several states, including Oaxaca, Yucatán, Michoacán and Tlaxcala.

We have also featured fonts in the Puebla region, notably those at San Gabriel Cholula and Tecali.
In this and subsequent posts we illustrate some of the other interesting examples in the state, starting with the extraordinary sculpted font at Acatzingo. 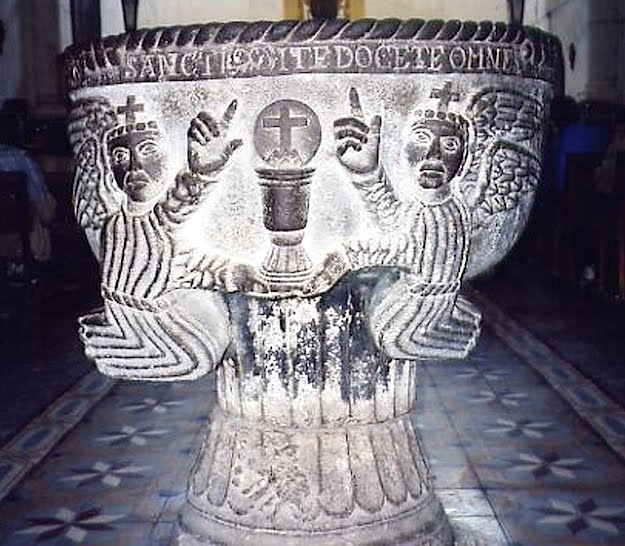 Acatzingo
The formidable 16th century "fortress" church of San Juan Evangelista Acatzingo boasts one of the finest and most intriguing sculpted baptismal fonts in Mexico. 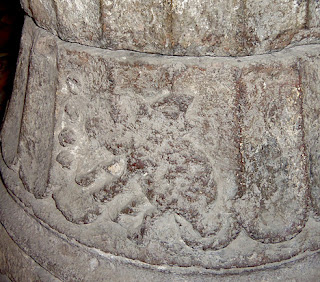 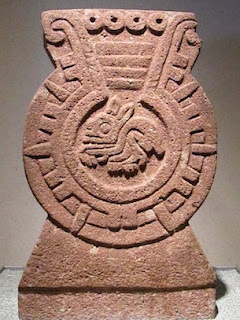 4 Rabbit glyphs: from the font and on an Aztec sculpture
Set prominently in the middle of the nave, instead of in the baptistry, and rimmed by the Franciscan knotted cord, the font stands atop a stylized, feathered or petaled base on which the date 1574, or 4 Rabbit, is inscribed in Aztec pictorial glyphs.

The town coat of arms, also in indigenous style, is emblazoned on the other side, incorporating reeds and water—a reference to Acatzingo's place name: Where Reeds Grow.
Painted at one time, the basin is boldly sculpted with winged Angels of the Apocalypse who seem ready to take flight. Flanking a relief of the Sacrament, the angels point upward to the Latin words of the Benediction of Baptism inscribed around the rim, the beginning and end of which are visible here:


Go teach all nations, baptizing them in the Name of the Father, and of the Son, and of the Holy Spirit.