The lost fountain of Tepeaca

In recent posts on our sister site we have looked at the murals of Tepeaca, and in an earlier page here, we made note of the warrior eagle relief. In this new post we attempt to trace the remnants of the great 16th century fountain at Tepeaca.
As we have seen previously, one of the most pressing needs in early colonial settlements was an adequate water supply. The first friars often went to extreme lengths to assure this supply, sometimes building long aqueducts from distant sources.
Tepeaca was no exception, where water was piped many kilometers from mountain sources in Tlaxcala for distribution in the convento and at a grand fountain in the center of the village.    According to 16th century accounts,* the octagonal fountain featured eight access points, all housed in carved stone figures with spouts at each corner. 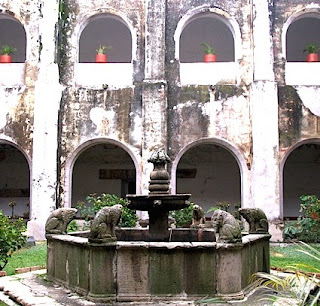 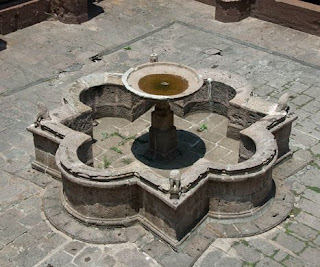 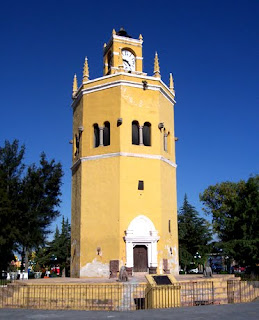 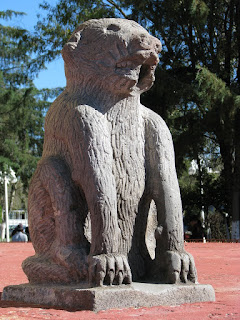 However most of the Tepeaca stone figures adorning the fountain have survived, at least two of which are currently mounted in the vast village plaza beside the also octagonal, Moorish style colonial watch tower, or "rollo".
Two others are housed elsewhere in Tepeaca and another pair is reportedly in the collection of the Museo Regional de Puebla. Two more, also thought to be from the same source, are located in the Museo Nacional del Virreinato. 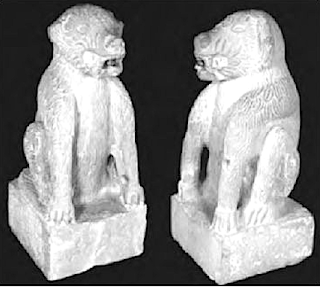 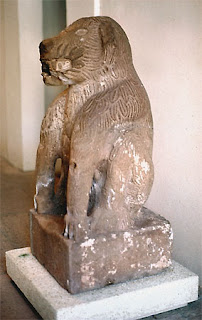 zoomorphic spouts in the Museo Nacional del Virreinato
Although lions are more generally associated with Spanish style fountains, these sculpted figures appear to be dogs or coyotes. In addition all are cloaked with feathers—an unusual feature that has a clear connection to the pre-hispanic tradition of plumed animal deities, and marks them as the work of native stone carvers.