San Francisco Totimehuacan
In this blog we have looked at several early Franciscan monasteries in Puebla.*  Most are still in use after almost 500 years, and some, like the basilica at Tecali, are now roofless and disused.
However, few of these grand early churches remain in such a ruinous and neglected state as the great 16th century monastery at Totimehuacan, formerly one of the most important and handsome Franciscan houses in the region.

In the first of three posts on Totimehuacan we review the architectural high points of the church and convento.
Founded in the 1560s, construction of the massive church, girded by a large atrium, took another 20 years. Reputedly built to a design by the celebrated Spanish architect Francisco Becerra, who also worked on nearby Cuautinchan and Puebla Cathedral, the church was remodeled more than once in the colonial period.
Even in its present abandoned condition, the 16th century west entry retains its severe Renaissance grandeur, closely related to the purista style front at the nearby Basilica of Tecali.
Sleek paired columns reach up from high, squared bases to frame the outsized arched doorway, forming a classic triumphal arch. 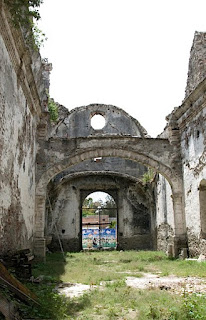 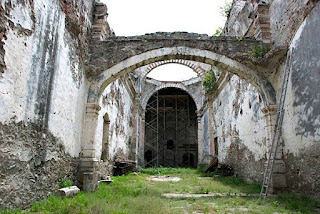 The roofless nave to the west, and east 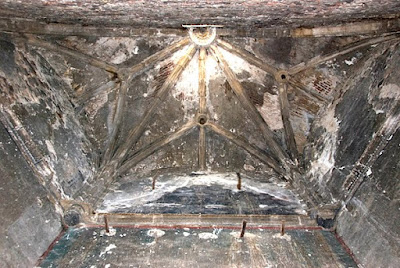 Little now stands of the lofty vaulting of the nave, save for the ribbed section above the polygonal apse, which, together with the now missing wooden main altarpiece, long helped to protect a large 16th century Calvary fresco in the rear lunette—all that remains of the once abundant church murals.
Although only fragments remain, they testify to its high quality and possible affinity to the similarly placed Crucifixion scene at Tecali. 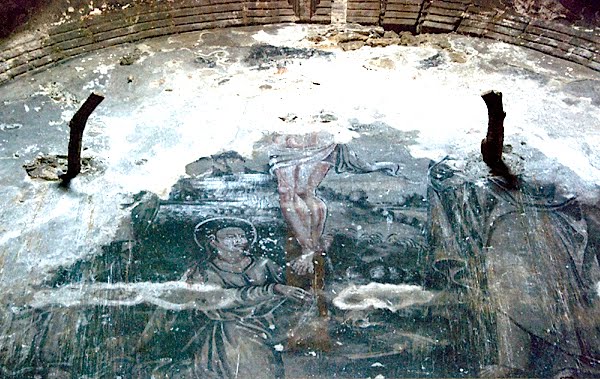 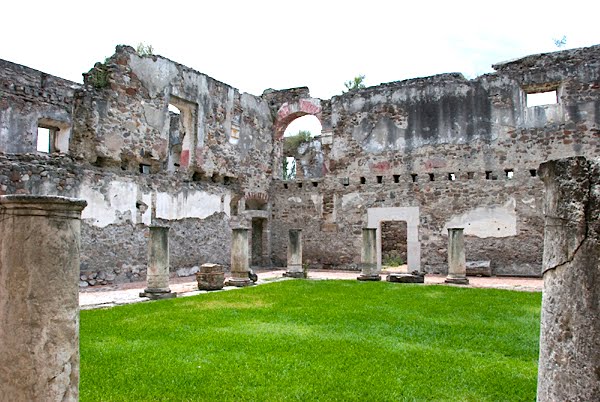 In our next post on Totimehuacan we will look at the colonial furnishings preserved in the parish church, including retablos and an unusual painting of the Last Judgment.
text © 2017 Richard D. Perry
color images by the author, Niccolò Brooker and ELTB