In our previous post we described the carved cross at Alfajayucan; here we look at the sculpted atrium cross at Temimilcingo, in the state of Morelos. 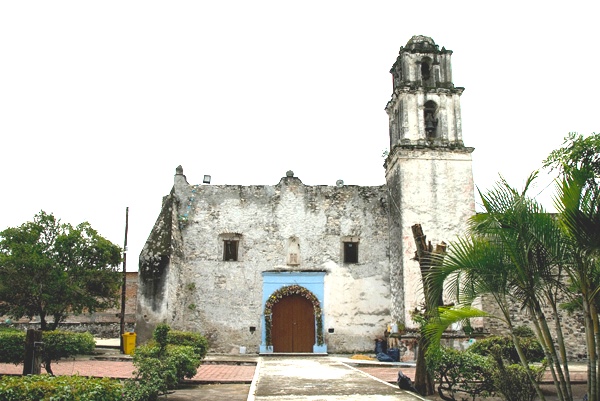 Asunción Temimilcingo
"On the Small Round Stone Column"
"On the Small, Round Stone Column" is a reference, preserved in the Aztec place name, to an ancient shrine or temple here, now long gone. But the tradition of sanctity lives on in the mission, perhaps erected on the original temple site.
Like nearby Tlaquiltenango, this early Franciscan mission in the tierra caliente of Morelos was taken over by the Dominicans in the mid 1500s. 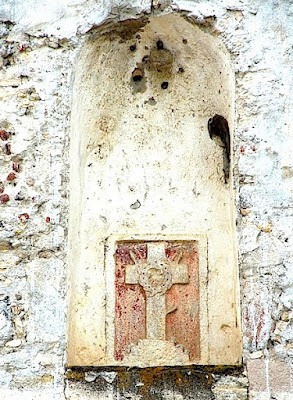 The unprepossessing rectangular church front, with its solitary tower, has as its only ornament a Calvary cross relief featuring a large "windblown" crown of thorns with protruding spikes over the axis. 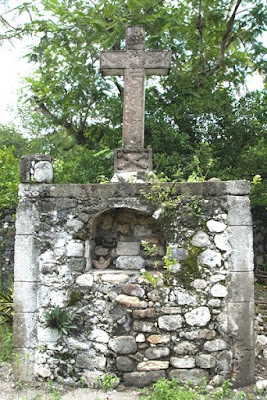 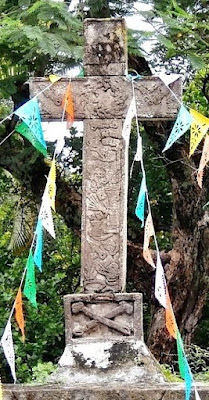 But the main interest here is the imposing atrium cross, still mounted in the churchyard. Possibly a remnant from the Franciscan tenure of Temimilcingo, this rustic carved cross is our favorite among the few that survive in this region.
Raised on a high base inset with an arched cavity extending deep into the base at the front—still a receptacle for devotional offerings—the cross is set on a box pedestal carved with crossed bones.

The cross itself is carved with a full assortment of Passion related reliefs, packed tightly between raised borders.
As with the facade cross, a worn, spiny crown of thorns seems to rotate at the crossing. A trio of angled spikes with round, drilled bases appears on the arms and lower shaft—minimal representations of Christ's wounds. 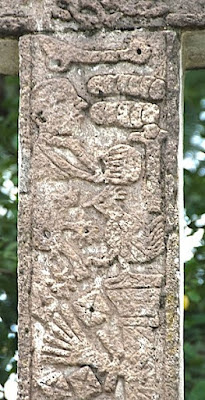 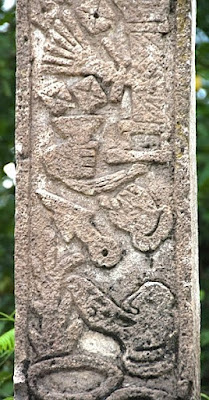 upper shaft;                                lower shaft
Other objects crowded on the shaft include three tumbling dice beside an elongated column topped with a rooster. At the foot, a corn plant springs from an oval ring. An indistinct INRI plaque transfixes the head of the cross.
There are also four profile heads: two small heads are outlined in the outer corners of each arm, while the head of Judas appears on the upper shaft, dangling a rope and purse, flanked by rows of silver coins. A fourth head at the foot of the cross vomits an angry speech scroll.
It is tempting to regard this densely carved stone monument as the successor to a stele or inscribed pillar that may once have graced the ancient temple precinct here. 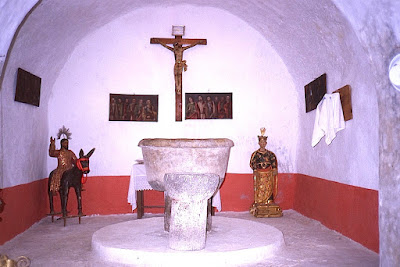 Other features of interest at Temimilcingo include the old stone fonts and folkloric processional santos in the baptistry, as well as the austere but neatly restored two story cloister. 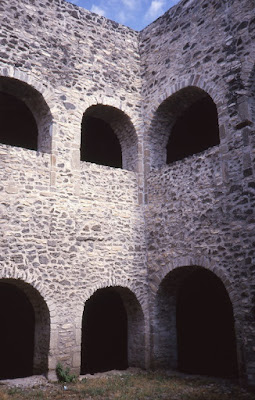