Atlixco: the altarpiece of the Assumption

In this first post of a series on the colonial arts and architecture of Atlixco, in Puebla—one of our favorite places in Mexico—we look at the 16th century monastery church of San Francisco and its handsome 18th century altarpiece of the Assumption. 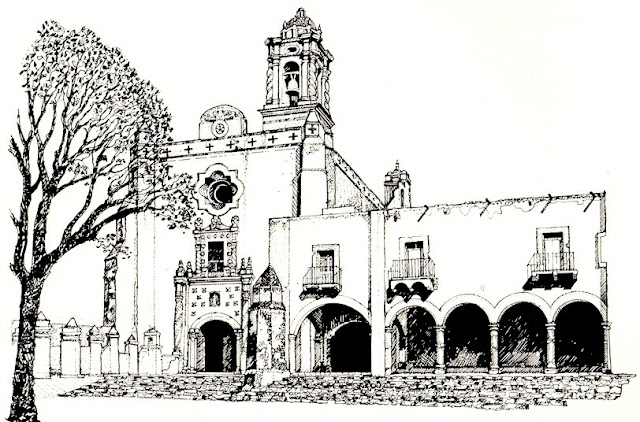 The hilltop monastery of San Francisco in Atlixco, a charming town situated on the lower slopes of the volcano Popocatepetl, was founded in 1538 by the pioneering Franciscan missionary Toribio de Benavente, known as "Motolinia," under its former name of Acapetlahuacan.
The elevated location, perched on the rocky Cerro de San Miguel, was chosen partly to avoid the mosquitos of the humid valley below, but also to keep the Indian converts apart from the baleful influence of the Spanish colonists. The fortress-like aspect of the monastery only helped to reinforce this separateness.
The Moorish-Gothic facade of the church was altered in the 1700s with the addition of spiral columns on each side of the doorway and the ocular window overhead. 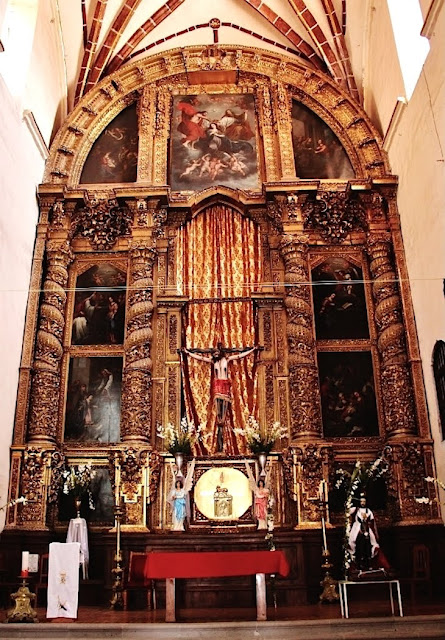 The Main Retablo
But the chief addition to the church was its magnificent, early 18th century, gilded main retablo, dedicated to the Assumption of the Virgin. Recently cleaned and restored under the auspices of Adopte una Obra de Arte, it rests in the apse beneath the original Gothic style rib vault.
Although the designer is not known, he seems likely to have been a Spaniard, or at least a leading Pueblan architect.  The altarpiece is unusual in that it is markedly Spanish in format, with an Italianate influence. Whether by design or influence, it is also related to other baroque church fronts in Atlixco, notably that of the Third Order of St. Francis.
The essentially simple format consists of a single main tier, set above a high predella and crowned by a semicircular pediment.The principal tier is divided vertically by pairs of giant spiral columns, deftly carved with vines and foliage and headed by complex composite capitals, all richly painted and gilded.

A coffered, semicircular frieze borders the pediment, which also features gilded pilasters carved with fruit and floral motifs.
The Paintings
The other main attraction of the retablo is its nine canvases of the Life of the Virgin, painted in warm, glowing colors by the well known Mexican baroque artist Francisco Martínez (active 1718 - 1757), and dated 1732 by an inscription.
A prolific painter, gilder and theatrical designer, Martínez is best known for gilding the retablo de Los Reyes in the Mexico City cathedral (1743). Although several of his numerous paintings have survived—some are also in the Mexico City cathedral and in the Davenport collection (Iowa)—the Atlixco retablo contains his only known complete and intact cycle of retablo paintings in situ. It is also quite likely that Martínez decorated and gilded the retablo.
Considered a competent if uninspiring artist, and noted painter of women, Martínez’ strengths are his draftmanship and assertive compositions in the late 17th century Mannerist tradition. However, his figures here seem rather static and lack the sensuous lines and facial expressiveness associated with the more facile artist Miguel Cabrera who followed him. 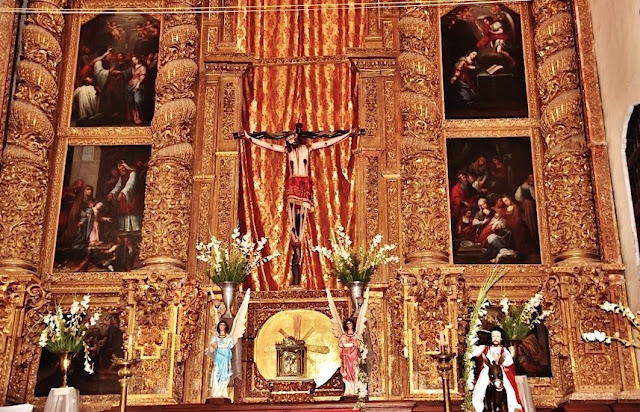 The principal canvases are of different sizes and shapes, and have been newly cleaned and restored (2000).
The iconography glorifies the life of the Virgin, proceeding from the base panels to the pediment, although the intended original order may have differed. The small base panels, as restored, portray the Virgin as a girl, praying (on the right) and reading under the gaze of her father Joachim (at left.) 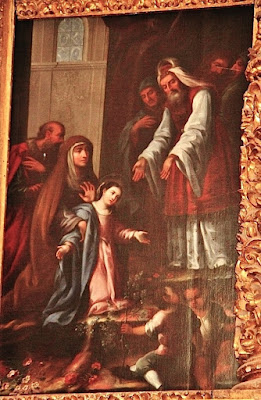 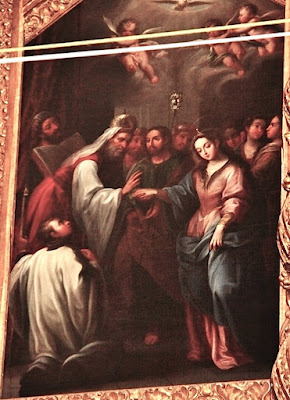 The four main canvases, between the columns, represent, on the lower left, the Presentation at the Temple, and the Marriage of Mary above, all lit in a Zurbaranesque chiaroscuro. 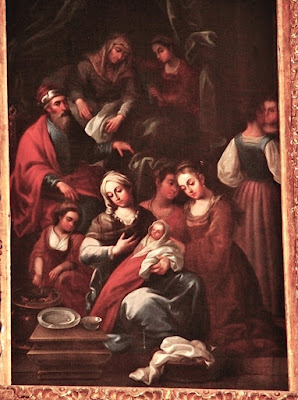 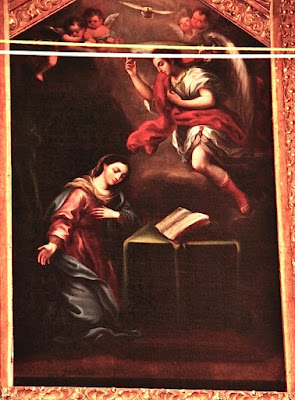 At right are the Nativity of the Virgin, and the Annunciation. 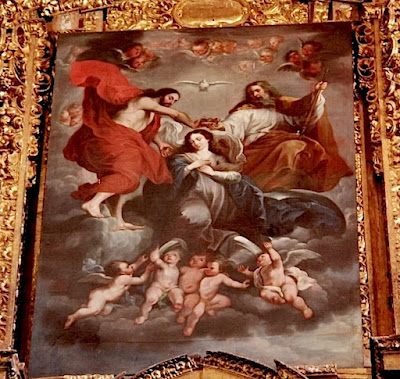 The square painting at the center of the upper pediment portrays the Assumption and Coronation of the Virgin by the Holy Trinity. This composition is more dynamic than the other panels, a swirl of robes, clouds and putti in the style of Rubens. 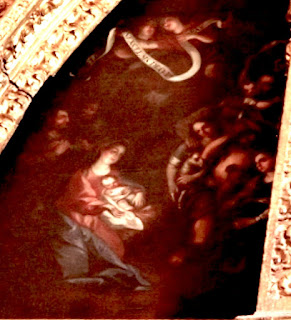 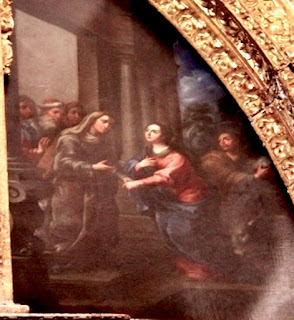 The center canvas is flanked by two segmented panels featuring The Nativity of Jesus and The Visitation.  An exceptional altarpiece now in prime condition.