With this post we resume our ongoing series on distinctive Mexican stone crosses.


This suburb of Cuernavaca was at one time part of the estate of the conquistador Hernán Cortés, who founded the principal church of San José here, later demolished and rebuilt in the 1700s.
While a crude, whitewashed cross stands beside the early chapel here, two other more interesting crosses can be found elsewhere in town.


The first and most densely carved of the two is found in the atrium of the 16th century barrio church of San Jerónimo, notable for its elegant, sculpted doorway.

Outlined by raised borders and amply carved with Passion symbols,  the cross is in the style of other Morelos crosses at Temimilcingo, Yecapixtla and Tepoztlán.
The swirling, woven Crown at the axis emits windblown rays and is flanked by large, arrow like Spikes. These pierce worn, bunch-of-grapes style Wounds on the arms and the shaft.
An enigmatic relief on the neck, that looks like a rabbit emerging from a magician’s hat, may represent a remnant Tres Potencias tiara. 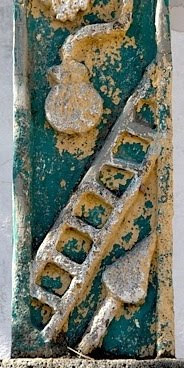 Although eroded in places, and marred by layers of peeling green and gold paint intended to highlight the reliefs, the cross displays classic Passion objects, such as the Chalice, Cockerel, Column and Ladder, evenly spaced along the arms and shaft. 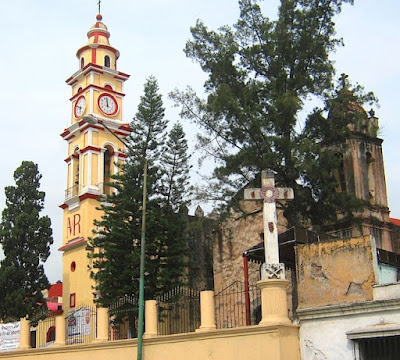 El Santuario de Milagros
While the Sanctuary of Our Lady of Miracles in Tlaltenango is far grander, the cross mounted on the atrium wall is less profusely sculpted. 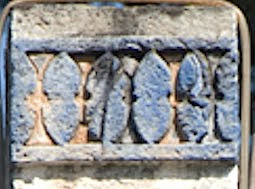 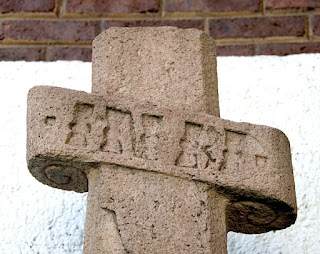 INRI plaques: Milagros (left)  and Tultitlan (Right)
A stylized INRI is inscribed atop the cross. Carved in stylized Roman letters by sometimes inexpert native artisans, as in the case of the Milagros cross, they are often difficult to distinguish.  A similar but more easily read plaque is seen at Tultitlan.

text © 2016 Richard D. Perry. images by Niccolò Brooker and others